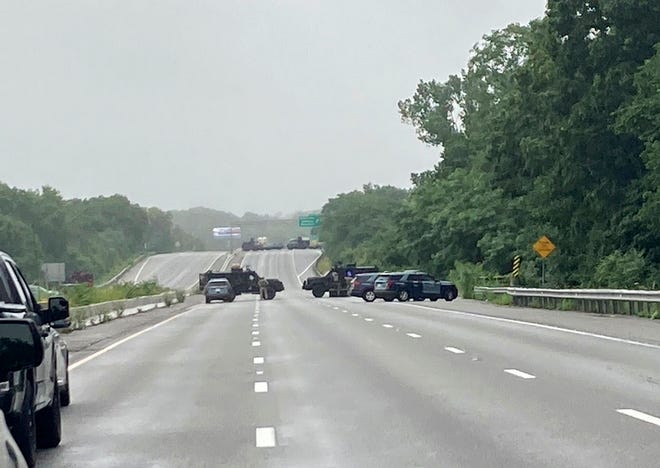 What is Rise of Moor, Moorish sovereign


An armed standoff on a Massachusetts freeway that blocked traffic for hours ended with 11 arrests, state police said.

Parts of I-95 were shut down Saturday and a shelter in place order issued nearby after the standoff with the heavily armed group began around 2 a.m.

Mass State Police Col. Christopher Mason said some members of the group were clad in military-style gear with long guns and pistols and were heading to Maine from Rhode Island for “training.”

Mason said the leader of the group, identified as Rise of the Moors, claimed it was not an anti-government group. The Southern Poverty Law Center says the Moorish sovereign citizen movement, a larger collection of independent organizations and individuals, is “an offshoot of the anti-government sovereign citizens movement,” which contends individuals are independent of the government.

More on the Massachusetts standoff:11 people in custody after hourslong armed standoff on I-95

Here’s what we know:

What happened in the standoff?

Mason said the incident began early Saturday when a trooper noticed two cars pulled over on I-95 with hazard lights on after they had apparently run out of fuel.

The trooper noticed the group of men were heavily armed and asked for their drivers licenses and firearm permits, Mason said. The men did not have either and after the trooper called for backup, some of the men ran into the woods with their firearms, Mason said.

“You can imagine 11 armed individuals standing with long guns slung on an interstate highway at 2 in the morning certainly raises concerns and is not consistent with the firearms laws that we have in Massachusetts,” Mason said.

Police spoke with the group throughout the morning via hostage negotiation teams, Mason said. Mason said the individuals surrendered after police tactical teams used armored vehicles to tighten the perimeter around them.

Police and prosecutors are working to determine what charges the members of the group will face, and they are expected to appear in court Tuesday.

Who are Rise of the Moors and Moorish sovereign citizens?

Videos shared on social media appeared to show the leader of the group speaking from a vehicle on I-95 and with police negotiators.

“We are not anti-government. We are not anti-police, we are not sovereign citizens, we’re not Black identity extremists,” said the man who appeared to be wearing military-style equipment. “As specified multiple times to the police that we are abiding by the peaceful journey laws of the United States.”

“Different factions and leaders cobble together bits and pieces from a variety of sources and craft their own legal theories,” MacNab wrote on Twitter, saying they rely on beliefs from “Moorish Science Temple, Black Hebrew Israelism, Nation of Islam, UFO theories, phony Native American tribes, and the pseudo-legal arguments crafted by white supremacist ‘patriot’ groups in the 1970s.”

On its website, Rise of the Moors says, “Moor does not mean Black. The noun ‘Moor’ is a shortened variant of the word Moroccan.” The group also says the term Black was used by Europeans to “strip us of our illustrious history.”

The group also denies being sovereign citizens on its website but says the records “show that the Moors are the organic or original sovereigns of this land – America.”

MacNab said some believe Moors were the first settlers of the U.S. Some also believe Morocco and the United States signed a treaty shortly after the American Revolution that exempts Moorish people from the law.

Because of their claims of independence from U.S. law, some members have alternative passports and drivers licenses, MacNab said. The Southern Poverty Law Center says some groups sustain themselves by selling these fake documents. Others engage in tax fraud and other financial fraud, the center said.

MacNab said most Moorish sovereigns are not violent, but that their financial tactics may spread amid post-pandemic foreclosures.

The Southern Poverty Law Center said a small number of Moorish sovereigns, however, have engaged in violent acts, from shootings, robberies to other armed confrontations.