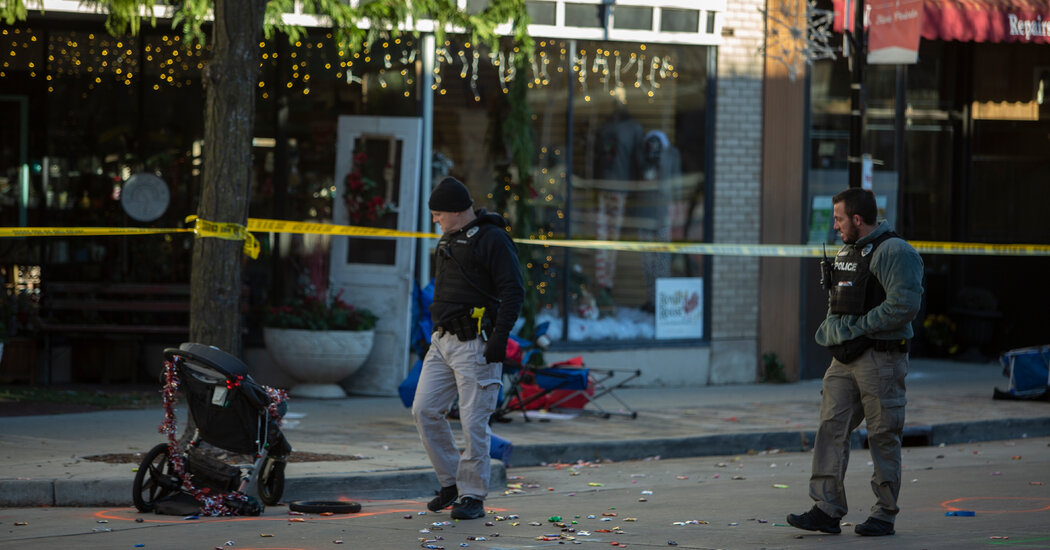 WAUKESHA, Wis. — Police had a person of interest in custody on Monday after the driver of a red S.U.V. barreled through a Christmas parade, killing at least five people and injuring more than 40 others.

Chief Daniel Thompson of the Waukesha Police Department confirmed the police were questioning the person of interest in the Sunday night incident but did not release additional details. Witnesses described the driver as male, but that was not confirmed by the police. Chief Thompson said shots were fired by the police at the driver.

Jen Psaki, the White House press secretary, said President Biden was receiving regular updates on the tragedy. “Our team is in close touch with local officials to offer any support and assistance needed,” she said on Twitter. “Our hearts are with the families and the entire community.”

It was supposed to have been a celebratory night in Waukesha. Dance groups and high school bands and politicians were marching along Main Street in the Milwaukee suburb’s Christmas parade, which was returning from a pandemic hiatus.

Then, just before 4:40 p.m., the driver of a red S.U.V., said to be a Ford Escape, stormed past barricades and into the crowd, striking dozens. City authorities said in a statement late Sunday that the number of dead and injured could change.

Area hospitals reported treating dozens of patients, including many children. It was unclear what might have motivated the episode.

“Today our community faced horror and tragedy in what should have been a community celebration,” said Mayor Shawn Reilly, who described seeing smiling children and happy parents when he marched along the parade route earlier in the day. “I’m deeply saddened to know that so many in our community went to a parade but ended up dealing with injury and heartache.”

Children’s Wisconsin, which treats only pediatric patients, said Monday on Twitter it treated 18 children who were injured in the parade. Details about their conditions were not immediately available. Another hospital, Aurora Medical Center–Summit, said in a statement that it was treating 13 patients, including three in critical condition. Officials at Froedtert Hospital said they also had received patients but did not specify how many.

This was the 58th Christmas parade for Waukesha, an annual event that was canceled last year because of the pandemic. The theme of this year’s event was “Comfort and Joy.”

Authorities have confirmed that at least five people are dead, and another 40 are injured.

Among the victims are members of the Milwaukee Dancing Grannies, an amateur dance group for grandmothers that has been a fixture in the local parades for nearly four decades. On Facebook on Monday, the group suggested that members had died.

“Those who died were extremely passionate Grannies,” the statement said. “Their eyes gleamed …. joy of being a Grannie. They were the glue … held us together.

A representative of the group did not immediately return phone calls seeking more information, but the statement said the group would post more details as they became available.

“The Milwaukee Dancing Grannies are devastated by this terrible tragedy,” the statement said, adding, “Our group was doing what they loved, performing in front of crowds in a parade putting smiles on faces of all ages, filling them with joy and happiness.”

Founded in 1984, the group performed choreographed pompom routines and dances at summer and winter parades across southern Wisconsin. A Facebook posting said members need only be “a grandmother or grandmother figure,” available for weekly practice, healthy and “ready to have fun.”

A spokesman for Children’s Hospital of Wisconsin, which treats only pediatric patients, said Monday on Twitter that its staff had treated 18 children who were injured in the parade. Details about their conditions were not immediately available.

Another hospital, Aurora Medical Center–Summit, said in a statement that it was treating 13 patients, including three in critical condition. Officials at Froedtert Hospital said they also had received patients but did not specify how many.

Officials with the Xtreme Dance team, another group that marched, asked for thoughts, prayers and “privacy to process the tragic events.”

The Roman Catholic Archdiocese of Milwaukee said a priest was among the injured, along with parishioners and students at a local Catholic school.

The tragedy spoiled what participants and onlookers described as a joyous night in Waukesha, a bedroom community about 20 miles west of Milwaukee. More than 60 entries, from the Waukesha Fire Department to the Old Car Club to Santa Claus, were scheduled to march through downtown.

Witnesses described scenes of chaos and tragedy in the moments after the driver passed through.

Mikey Randa, 14, said he was marching in the parade with his high school football team when he saw a young girl hit by the car.

“The car just flew past us, there was a lot of panic,” he said, adding that he initially didn’t grasp what had happened. Mr. Randa said he then saw five or six bodies lying on the ground. “I’m still in a bit of a shock,” he said.

Jason Kellner, 49, said that he had just watched his son, a drum player in the Waukesha South High School marching band, pass by when he saw a red Ford Escape heading toward the crowd. After passing through an intersection, Mr. Kellner said, the car “started mowing people down.”

“I’ve never felt a worse feeling; wondering what I’m going to find when I get to my kid,” Mr. Kellner said of the moment he ran toward his son, whom he found standing unharmed by the side of the road.

Mr. Kellner said he pulled a bloody saxophone off the street and saw several people, apparently injured, on the ground.

Tyler Kotlarek, 28, was watching the parade with family members when they heard what at first sounded like cheering, but then they realized “it was screams,” he said. “It was the worst thing I’ve ever seen in my life.”

Waukesha is an upper-middle-class bedroom community about 20 miles west of Milwaukee.

It made headlines in 2014, when two 12-year-old girls who wanted to gain the favor of a sinister fictional character called Slender Man lured a classmate to a park and stabbed her 19 times, shocking parents in Waukesha.

The girls told the authorities that they believed Slender Man was real, that he lived in a mansion in the Northwoods of Wisconsin and that they needed to kill to prove themselves worthy to him. They were charged as adults with attempted murder.

Politically, Waukesha is known as one of the “WOW” counties surrounding Milwaukee (the others are Ozaukee and Washington) that are a key battleground in Wisconsin, itself the narrowest of battleground states.

“If Wisconsin is the bellwether state for November’s general election, then Waukesha County might be the most important area of the most important state,” Astead W. Herndon, a New York Times political correspondent, wrote in July 2020.

Waukesha and other well-educated, affluent counties north and west of Milwaukee have for decades delivered Republican landslides, defying a Democratic shift in suburbia in other Northern states. Yet while then-President Trump easily won Waukesha County in 2020, his margin fell by over five percentage points compared with 2016, and President Biden came out ahead in the city of Waukesha.