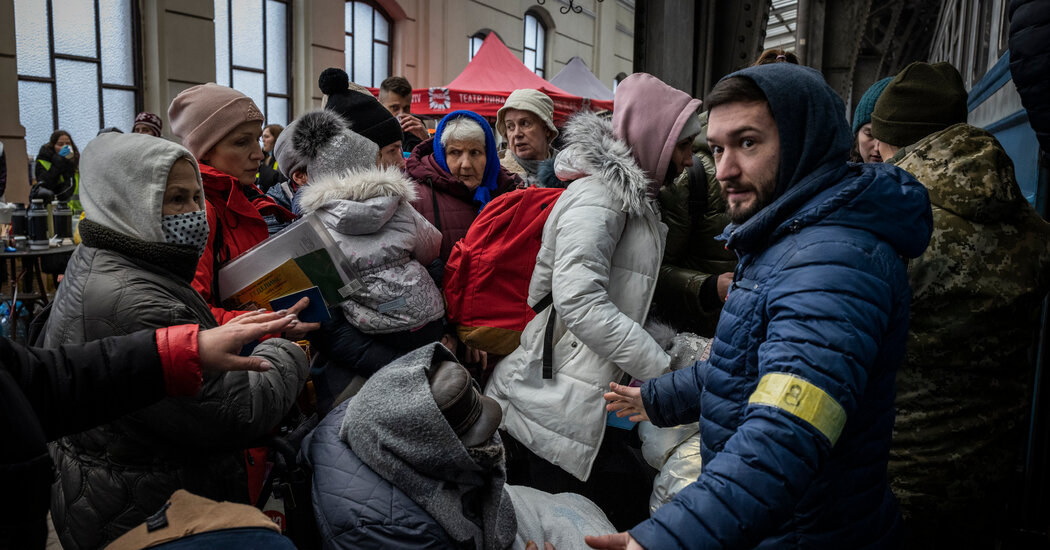 Prime Minister Naftali Bennett of Israel traveled to Moscow to meet at the Kremlin with President Vladimir V. Putin of Russia, according to Israeli and Russian officials, a rare moment of diplomacy in a war that has stretched into its second week.

“The situation around Ukraine is being discussed,” a Kremlin spokesman, Dmitry Peskov, told reporters, according RIA Novosti, a state-controlled news site.

The meeting comes at a critical time in the war, as Russian forces are encircling major cities and Ukraine is teetering into a humanitarian crisis. Russian and Ukrainian diplomats are continuing bilateral talks, but several overtures at diplomacy by third parties, including efforts by President Emmanuel Macron of France, have stalled.

Israel is in a unique position to potentially barter a deal, or at least pass messages between Western allies, Russia and Ukraine, given its alliance with the United States, its quiet cooperation with Russia in Syria and is shared cultural ties to Ukraine. Mr. Bennett and President Volodymyr Zelensky of Ukraine are the world’s only two Jews at the head of national governments.

Mr. Bennett’s office said in a statement on Saturday evening that the meeting with Mr. Putin lasted about three hours and took place “in coordination and with the blessing of the U.S. administration.” In addition, the statement added, Mr. Bennett was working in coordination with Germany and France and was “in ongoing dialogue with Ukraine.”

There was no immediate information about any outcome from the meeting. A spokeswoman for Mr. Bennett said that he had spoken with Mr. Zelensky after his meeting with Mr. Putin.

The Israeli government has tried to maintain good relations with both the Russian and Ukrainian leaders during the current crisis, and Mr. Bennett was previously asked by Mr. Zelensky to mediate between the sides.

Mr. Bennett left Moscow on Saturday evening on his way to Berlin to meet with the Chancellor Olaf Scholz of Germany. Mr. Scholz was in Israel for a short visit this week and, in a meeting with Mr. Bennett, discussed Israel’s possible role in mediation between Russia and Ukraine.

Mr. Bennett had spoken by phone with Mr. Putin on Wednesday, hours after speaking with Mr. Zelensky, the last of few rounds of phone conversations between them.

In a sign of the urgency of the mission, Mr. Bennett, an observant Jew, left Israel on Saturday morning, during the Sabbath, breaking the religious injunction against travel. According to Jewish religious law, the sanctity of the Sabbath is overridden by the principle of preserving human life.

Mr. Bennett was accompanied by Zeev Elkin, the Israeli housing minister, who assisted with translation, according to the Israeli prime minister’s office. Mr. Elkin frequently acted in a similar capacity over the past decade in meetings between Mr. Bennett’s predecessor, Benjamin Netanyahu, and Mr. Putin.

Mr. Elkin, who is also an observant Jew, was born in Kharkiv, Ukraine, in 1971, when it was part of the Soviet Union, and emigrated to Israel in 1990. Mr. Elkin has a brother still living with his family in Kharkiv, where Russian and Ukrainian forces have been fighting for control.

Mr. Bennett had come in for criticism in recent days, including from Mr. Zelensky, for not siding more stridently with Ukraine and for refraining from supplying it with any military equipment.

Israeli officials said that Israel had to maintain good relations with Russia in order to be able to continue Israel’s military campaign against Iranian and Hezbollah entrenchment in Syria, where Russia maintains a significant presence.

They said Israel was also concerned about the large Jewish communities in both Russia and Ukraine. After Saturday’s meeting at the Kremlin, Mr. Bennett’s office said he had also spoken with Mr. Putin about the situation of Israelis and Jewish communities as a result of the conflict in Ukraine.

Saturday’s meeting comes after several requests from Mr. Zelensky, both to Mr. Netanyahu and Mr. Bennett, to mediate between him and Mr. Putin. The last request was made in a telephone conversation held on Feb. 25, during which Mr. Zelensky also requested military equipment. While declining to send defensive gear, Mr. Bennett agreed to try to mediate between the countries.

Israeli officials said that the meeting at the Kremlin also touched on the progress of the talks in Vienna for a return to a nuclear agreement with Iran, and that Mr. Bennett expressed Israel’s opposition to a return to the agreement.