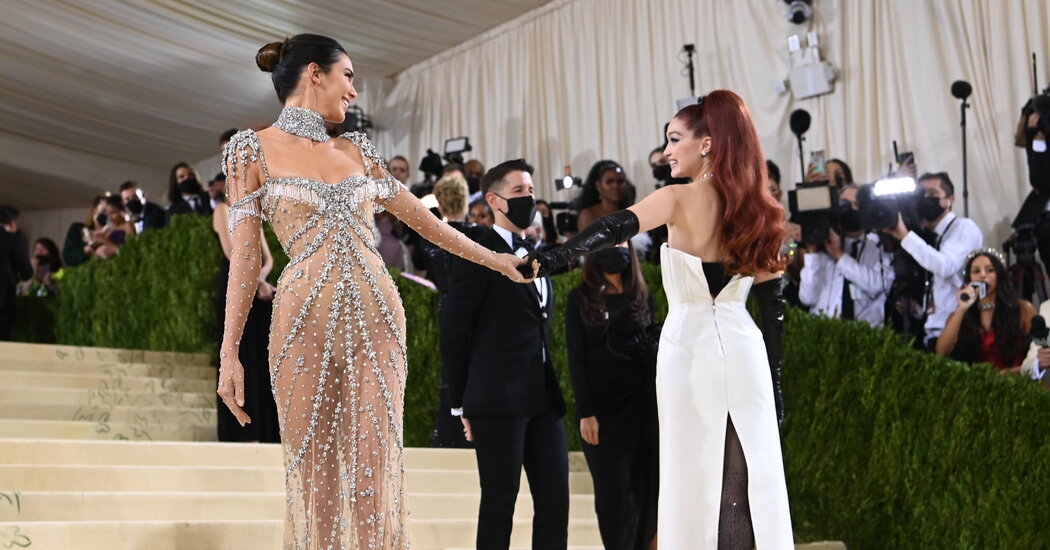 The Met Gala Returns With a Star-Spangled, Star-Studded Event


The United States is a relatively young country, and this year’s American fashioned-themed Met Gala seemed, in many ways, a nod to that fact. The hosts were a Gen Z dream team: Amanda Gorman, the 23-year-old inaugural poet; Timothée Chalamet, the 25-year-old star of “Dune”; Naomi Osaka, the 23-year-old tennis champion and mental health activist; and Billie Eilish, the 19-year-old music phenom.

Honorary chairs included Vogue’s Anna Wintour; the designer Tom Ford; and Adam Mosseri, the chief executive of Instagram, which is underwriting the exhibition and party along with Condé Nast.

This year the gala, also known as “the party of the year,” was framed as part of New York’s re-emergence, along with the reopening of Broadway shows, indoor dining and the U.S. Open. Still, many designers who live in Europe and usually make the trip did not attend, either because of quarantine rules or because they have to work on their own shows. Rumors swirled that some Hollywood stars also chose to sit this one out, perhaps because of health concerns or because of the fear that partying while people are sick is not the best look. And some regulars could not attend, because they had not been vaccinated — a requirement for all guests.

The result was a more local, younger and sportier guest list than usual (also a smaller one, as it had been downsized by about a third out of safety concerns). But the outfits were as eye-catching as always.

The dress code was “American Independence,” in honor of the Costume Institute exhibition it celebrated, “In America: A Lexicon of Fashion.” It kicked off with a high-energy performance by the Brooklyn United marching band dressed in red, white and blue custom Adidas jumpsuits by Stella McCartney, running up the steps of the Metropolitan Museum while the gymnast Nia Dennis, 22, performed acrobatics for the cameras. (Ms. McCartney sent the musicians in lieu of attending herself.)

Ms. Wintour, the longtime maestro of the event, wore a floral gown with a ruffled neck in homage to her “dear friend Oscar de la Renta,” the designer who passed away in 2014. But she was the exception, rather than the rule, in a sea of predictably patriotic — and occasionally political — outfits.

Representative Carolyn Maloney of New York, for example, arrived in a dress with streaming epaulets bearing the message “Equal Rights for Women” and a matching bag advocating for the passage of the Equal Rights Amendment. Her fellow Representative Alexandria Ocasio-Cortez wore a white dress with “Tax the Rich” scrawled in red on the back. Other attendees opted for nostalgic allusions to old-Hollywood glamour and the American West.

As celebrities walked the carpet, a substantial crowd of protesters gathered on a blocked-off Fifth Avenue to rally for racial justice.

The police arrested some of those who were taking part in the demonstration and who had ignored warnings to clear the street. The result was the somewhat jarring image of shouting protesters being dragged away by police officers past onlookers who were pressed up against metal barricades hoping to get a glimpse of celebrity glamour. (One of those celebrities was Mr. Chalamet, who walked partway to the Met wearing an almost-all-white ensemble that included a Haider Ackerman jacket, Rick Owens shirt and Converse high-tops.)

Many of the designers whose work is featured in the museum show were invited to the gala this. year for the very first time, hosted by more established brands because of the price of a ticket: $35,000 a seat. That’s steep for a small business (it’s steep by pretty much any measure), but the gala is the main source of funding for the Costume Institute, the only curatorial department of the Met required to finance its own operations.

Because of this, and to make up for a Met Gala-less 2020, the Costume Institute is going to hold another gala next May to celebrate part two of its American exhibition, which is intended to be even larger. And what’s more American than unchecked growth?