Home  /  News   /  Texas Student Who Protested Pledge of Allegiance Gets $90,000 in Settlement 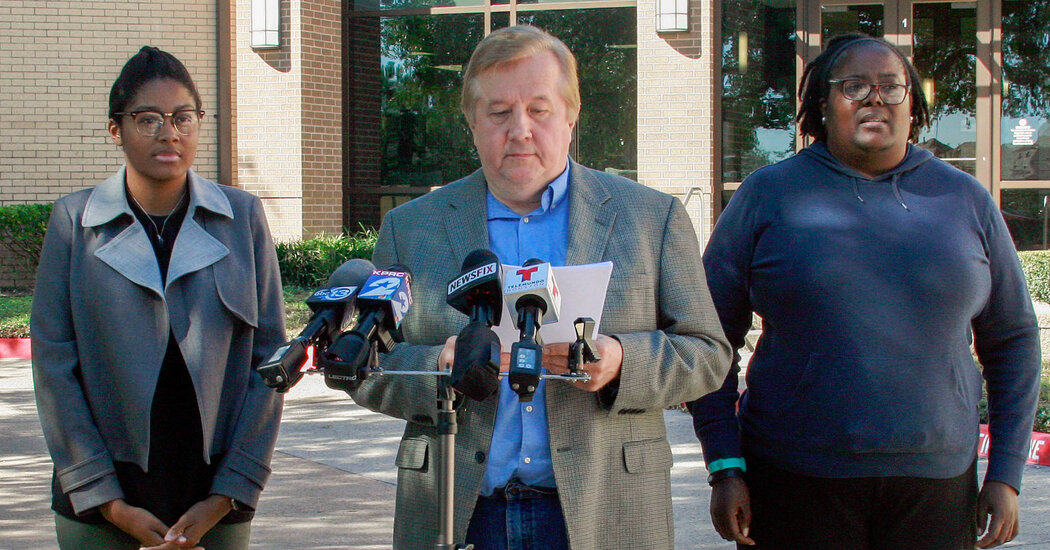 Texas Student Who Protested Pledge of Allegiance Gets $90,000 in Settlement


In Texas, state law requires students to pledge allegiance daily to the flags of the United States and of the Lone Star State. As a high school student in Spring, Texas, Mari Oliver sat silently during this daily recitation.

In September 2017, two months into Ms. Oliver’s senior year at Klein Oak High School, Benjie Arnold, a sociology teacher, played Bruce Springsteen’s “Born in the U.S.A.”, and asked the class to write about the feelings the song summoned up in them. He then instructed the students, including Ms. Oliver, to transcribe the words of the Pledge of Allegiance, according to a federal lawsuit she filed that year against him, three other teachers, a school administrator and the school district, alleging that she was harassed because she chose not to recite the pledge.

On that day in September, she did not write down any words. Instead, she drew a squiggly line.

Four years later, lawyers for Ms. Oliver, now 21 and long since graduated from Klein Oak High School, announced on Tuesday a settlement with Mr. Arnold reached earlier this month under which Ms. Oliver will receive $90,000 paid by the Texas Association of School Boards.

“Nonreligious students often face bullying or harassment for expressing their deeply held convictions,” Nick Fish, the president of the civil rights organization American Atheists, which pursued Ms. Oliver’s case, said in a statement. “No one should have to endure the years of harassment, disrespect, and bullying our client faced. The fact that this happened in a public school and at the hands of staff who should know better is particularly appalling.”

Ms. Oliver objected to the pledge because she did not believe that the United States guarantees “liberty and justice for all,” especially for people of color, according to the statement. She also did not agree with the words “Under God.” The U.S. Supreme Court ruled in 1943 that students have a First Amendment right to opt out of saluting the flag or pledging allegiance.

Theresa Gage-Dieringer, a spokeswoman for the Texas Association of School Boards, which provides liability coverage for the Klein Independent School District, said that “after discussion with counsel and Mr. Arnold, it was decided that in the interest of limiting continued expensive litigation, a settlement agreement should be reached.”

Mr. Arnold did not admit wrongdoing, according to Geoffrey T. Blackwell, litigation counsel at American Atheists.

Mr. Arnold has taught at Klein Oak for more than five decades, and is currently still employed at the school, said Justin Elbert, a spokesman for the Klein Independent School District. Mr. Arnold and his lawyer did not immediately respond to requests for comment on Wednesday.

After the pledge assignment, Mr. Arnold told the class that students who failed to complete it would receive a zero grade, and then said people who sat during the pledge were comparable to “Soviet communists, members of the Islamic faith seeking to impose Shariah law, and those who condone pedophilia,” according to the lawsuit.

In an unsuccessful move to be shielded from the lawsuit, Mr. Arnold contended that the pledge assignment had a “legitimate instructional purpose” and wasn’t meant to instill patriotism, according to court documents. He also said that he had not harassed Ms. Oliver or treated her differently from her peers because of her refusal.

By the time of the settlement, Mr. Arnold was the only defendant remaining. Two years earlier, a federal judge dismissed Ms. Oliver’s claims against the other school staff members and the school district.

Beginning in 2014, as a freshman in high school, there were myriad consequences for Ms. Oliver’s opting out of the pledge. Teachers singled her out during the pledge, sent her to the principal’s office, admonished her after class, and confiscated her phone, according to the lawsuit. Despite Ms. Oliver and her mother voicing concerns to school officials, the pushback from teachers continued and intensified, they said.

Mr. Blackwell said that Ms. Oliver’s experience “was by no means unique.”

“Students around the country face similar incidents of discrimination every day,” he said, adding that the organization’s survey of 34,000 nonreligious Americans found that more than one-third of individuals from 18 to 25 reported experiencing discrimination in education because of their nonreligious beliefs.

Despite the Supreme Court’s 1943 ruling protecting the right not to recite the pledge or salute the flag, debate and litigation over this right have persisted.

Three years ago, a sixth-grade student from Lakeland, Fla., who had refused to recite the pledge was arrested after a dispute with a substitute teacher about his protest. The boy, 11, told the teacher that he believed the pledge represented racism. In 2017, India Landry, then a 17-year-old high school student in Texas, was expelled after sitting through the pledge.

In a statement sent by Mr. Blackwell, Ms. Oliver said that she was hopeful that her case would “inspire others to stand up for their rights, especially Black people,” but that she was “saddened that Black people in America still have to fight for equality and equity.”