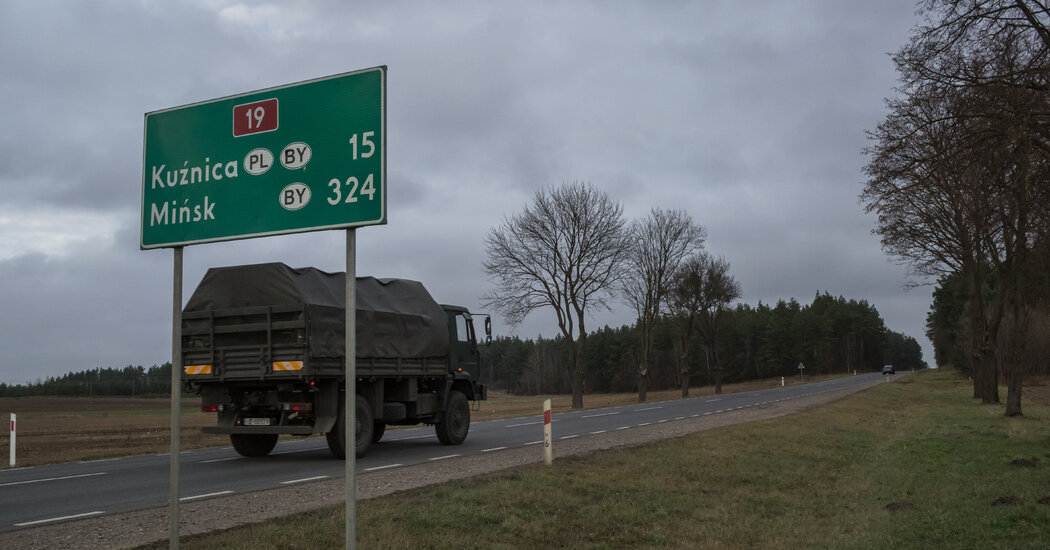 
BRUZGI, Belarus — The tense standoff on the border between Poland and Belarus descended into a dangerous melee on Tuesday morning when Polish border guards used water cannons and tear gas to repel what they said was an attempt by migrants to breach the heavily guarded frontier.

The use of water cannons and tear gas on Tuesday only added to the brutal conditions in the increasingly desperate situation for the migrants stranded on the border.

Tensions have been building along the European Union’s eastern front for weeks as thousands of migrants, mainly from the Middle East, have flown to Belarus in the hope of finding a path into the bloc. The E.U. member states that share a border with Belarus — Latvia, Lithuania and Poland — have accused the government of Aleksandr G. Lukashenko, the Belarus leader, of orchestrating what they say is a “hybrid attack” using human beings as weapons.

The Polish authorities, in a series of Twitter messages, said that border guards at the border crossing between Bruzgi and Kuznica in Poland had been assaulted by people throwing “stones, bottles and logs” and firing “stun grenades.”

“The entire aggressive behavior is coordinated by Belarusian services and monitored by drones,” the Polish authorities said, posting videos of the confrontations. “As a result of an attack by people inspired by the Belarusian side, one of the policemen was seriously injured.”

The officer was being treated at a hospital for what was believed to be a skull fracture, the authorities said.

Since the Polish government has banned journalists from reporting at the border, it was impossible to verify the authorities’ claims or the veracity of the scores of videos that appeared on social media purporting to show snippets of the confrontation.

And the Polish government has come under criticism from humanitarian organizations for a legal amendment it passed in October that allows migrants to be pushed back at the border and for asylum claims made by those who entered illegally to be ignored.

Late Tuesday, Belarus border guards began moving hundreds of migrants from the fetid and frozen encampment on the border with Poland, and to the shelter of a nearby warehouse. It was not immediately clear what plans the Belarus authorities had for the migrants they were moving.

Some of the migrants heading for the warehouse seemed to be giving up.

Bilal, 23, a migrant from Iraq who would only provide his first name: “It is too impossible to get to Europe, we want to go home.”

But as night fell, hundreds of people could still be seen in the open in the area near the border crossing, preparing for another freezing night.

Foreign Minister Sergey Lavrov of Russia on Tuesday called the actions of Polish forces “absolutely unacceptable,” at a news conference. Mr. Lavrov said that the forces “violate all conceivable norms of international humanitarian law and other agreements of the international community.”

Moscow has stood steadfastly by Belarus as international condemnation has mounted.

Jens Stoltenberg, NATO’s secretary general, said on Tuesday that the alliance is “deeply concerned about the way the Lukashenko regime is using vulnerable migrants as a hybrid tactic against other countries, and this is actually putting the life of the migrants at risk.”

The Lukashenko government has denied allegations, including from the United States, that it has engineered the crisis and is directing the movement of the migrants.

“We cannot let this so-called problem lead to heated confrontation,” Mr. Lukashenko told a government meeting on Tuesday, according to Belta, the state news agency.

“The main thing now is to protect our country and our people, and not to allow clashes,” he added. Belarus said it was investigating the actions of the Polish border guards.

Tuesday’s skirmish took place at a crossing that had until recently been a busy and vital link between Europe and Belarus.

But the site has been transformed as government helicopters and drones circle high above a maze of barbed wire and concrete walls.

Trapped between armed soldiers from Poland and Belarus, some migrants struggling to keep warm in makeshift shelters were suspicious of the offer of a warm place to sleep by the Belarusian authorities.

Reker Hamid, 32, said it was a ruse to empty the migrant encampment against the border fence and prepare for what he thinks will be a mass deportation to Iraq.

A migrant crisis. Gatherings of migrants along the European Union’s eastern border have led to an escalating standoff between Belarus and the E.U. Here’s what to know:

European accusations against Belarus. E.U. leaders claim that Aleksandr G. Lukashenko, the autocratic leader of Belarus, has engineered the crisis to punish European countries for harboring his opponents and imposing sanctions.

Fears of a humanitarian crisis. The migrants are stranded in the thick forests that straddle the border, facing bitter cold and an approaching winter. They are unable to enter the European Union or go back into Belarus. Several have already died from hypothermia.

“I prefer to die here in the cold than go back to Iraq,” he said.

He said he had spent $10,000 dollars, most of it borrowed, to get himself, his wife and 2-year-old son to Europe’s door and was not turning back.

Others, cold and hungry, were resigned to failure and ready to go.

“It is all over. We stay here and die or give up.” said Diyar Hassan, who has made four unsuccessful attempts to get into Poland.

While the crossing at Bruzgi has been the focus of some of the most intense standoffs, the border between Belarus and Poland stretches some 250 miles and the heartbreaking tales of suffering and loss have been growing by the day as the standoff shows no signs of being resolved.

At least 11 people have died at the border in recent weeks.

The number of migrants at the border started to grow after Belarus eased its visa rules in August. Western leaders say that Mr. Lukashenko — who is facing E.U. sanctions for his brutal crackdown on the political opposition and the forcing down of a Ryanair flight over Belarus to arrest a dissident journalist — is using migrants to gain leverage over the bloc.

Since the migration crisis of 2015, when more than a million migrants and asylum seekers tried to enter the European Union, the bloc has tightened border controls and declared that uncontrolled migration is no longer possible.

But the issue remains potentially explosive, and Poland’s nationalist government, which has been steadily losing support in the polls, has moved to seize the moment.

Poland’s chief central banker, Adam Glapinski — a longtime friend and ally of Poland’s de facto leader Jaroslaw Kaczynski — announced this week that the National Bank of Poland would issue a collectors’ note and coin dedicated to the “defense of the Polish eastern border.”

Mr. Kaczynski recently announced a meeting in Warsaw next month for like-minded right-wing leaders — including Victor Orban of Hungary and Matteo Salvini of Italy — to discuss the future of the European Union and the need for stronger emphasis on national sovereignty and “traditional values.”

The border crisis comes as relations between Brussels and Warsaw have tanked, with the European Union accusing the Polish government of undermining the rule of law and dismantling the independence of the judiciary.

But as the migrant crisis has grown, the bloc has lent its full support to Poland and the other nations on its eastern border.

With Russia lending support to Belarus, the humanitarian crisis unfolding at the border threatens to spiral into a broader regional conflagration. And as colder temperatures begin to grip the region, there are fears of further tragedy among the migrants, with thousands of men, women and children stranded in freezing conditions between the razor wire and border guards.