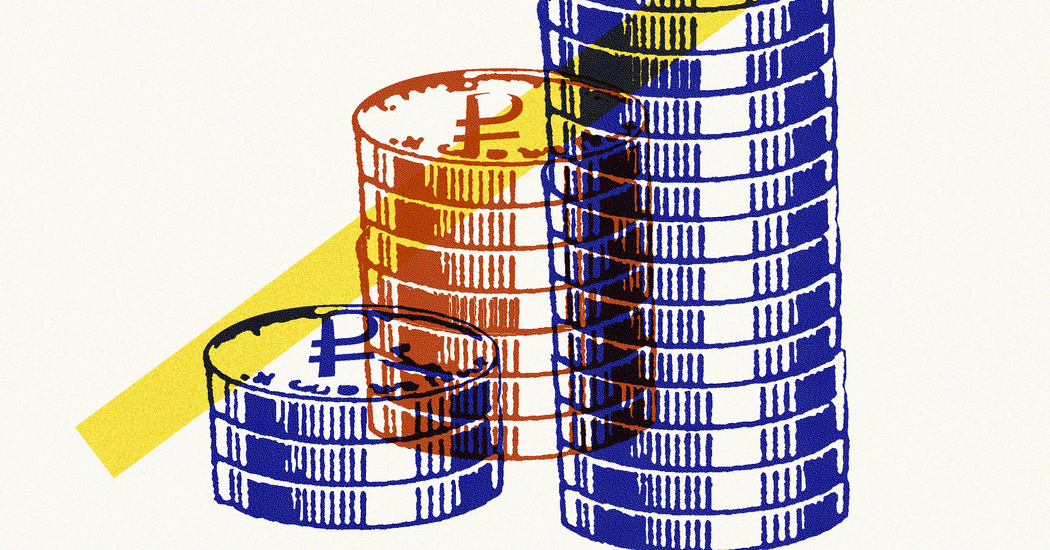 Opinion | The Ruble Has Bounced Back. What Does That Mean?


Even though Russia has plenty of foreign exchange at the moment, authorities are placing controls on it in case things get worse. Ordinary citizens can no longer take euros and dollars out of the country in large quantities. The central bank is requiring 80 percent of euros, dollars and other hard currencies that enter Russia to be converted into rubles, either on a Moscow exchange or through an authorized bank. The central bank then directs those hard currencies to the Ministry of Finance and private banks, which use them to repay foreign debt, and to companies that the bank decides should be allowed to import products.

The Kremlin is also requiring that unfriendly nations settle their purchases of natural gas (not oil so far) in rubles. They can pay in euros, dollars or whatever other currency is specified in the contracts, but 100 percent of those currencies will be converted into rubles by Gazprombank (the bank that serves Gazprom, one of the world’s biggest gas producers) at the official exchange rate to complete the transaction. “The anticipation of this policy has changed many traders’ outlook on the ruble,” Charles Lichfield, deputy director of the Atlantic Council’s GeoEconomics Center, told me.

Germany and Italy, the nations most affected by this requirement, have been pushing back against the Russian demand, claiming that it violates their contracts. “Right now there’s a real game of chicken,” said Jane Foley, a currency strategist in London for Rabobank of the Netherlands.

Propping up the ruble, and proving Biden’s rubble remark wrong, “is a very important propaganda signal,” Sergei Guriev, a professor of economics at Sciences Po in Paris who ran the New Economic School in Moscow from 2004 to 2013, told me.

Also politically valuable to Putin is Russia’s insistence on settling oil and gas transactions in rubles rather than dollars. “Putin is saying: ‘I want to impose my rules. I won’t be a rule taker. I will be a rule maker. I want you to settle in rubles,’” Aleksashenko said.

Still, shutting down the ruble’s convertibility can’t insulate Russia from market forces forever. The sanctions are already pushing up the inflation rate and will increasingly cause shortages of key components for manufacturers, Aleksashenko said. The currency will come under renewed pressure as Russia faces big payments on debt denominated in foreign currencies, Foley said. The ruble will also face downward pressure if Russia allows foreign companies that are pulling out of the country to sell assets and cash out, she said.

Then there’s brain drain. “Everybody I know is trying to run away” from Russia, Guriev said in March, in a Princeton video seminar. Lichfield told me: “The economic outlook for Russia is still very gloomy. The fact that capital controls have been reimposed has negative implications for Russia’s future.”