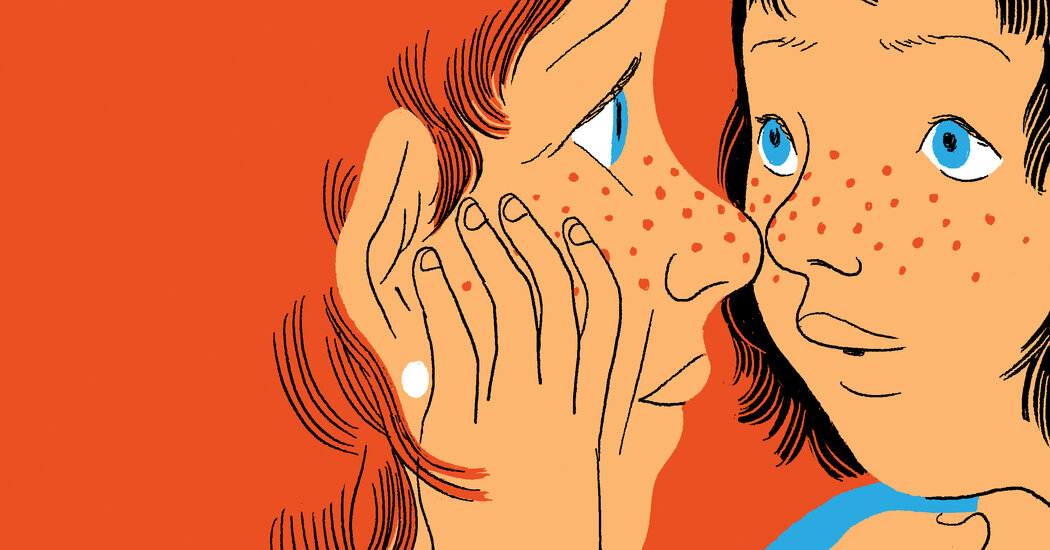 
For me, lately, the hardest part of parenting is raising a kid whose personality reflects my own like a mirror. One of my children is a perfectionist and incredibly hard on herself, just like me. My discomfort comes from watching her struggle with the same things I continue to struggle with at 40, and knowing in my heart that these issues may plague her all her life and that there may not be much I can do about it.

Here’s a small example of how it plays out for us: She brought a library book with her on our family vacation a few weeks ago and accidentally left it on the plane to Florida. First, she was worried that her school’s librarian would be mad at her. No matter how much we tried to reassure her that she wasn’t the first kid to misplace a library book and that the librarian wouldn’t take it personally, she was still anxious about it for the whole trip, to the point of not sleeping one night.

Then, without any prompting from me or my husband, she took money from her allowance and put it in her backpack, preparing herself to pay for the lost book on the Monday she returned to school. (I was proud that she wanted to take ownership but dismayed by her obsession with such a forgivable mistake.) Even though the librarian didn’t really chastise her, and she did pay for the book, my daughter still occasionally mentions the incident, donning the discomfort of that moment just to feel it bristle against her skin.

I’m intimately familiar with these feelings, as they’re also what I feel when I make any kind of mistake, and watching my kid experience them is even worse than feeling them myself. It’s not even just knowing that I can’t shield her from that anxiety; it’s also feeling guilty that she inherited my neuroses.

The whole episode made me flash back to taking calculus in my senior year of high school, getting a pop quiz I was totally unprepared for and bursting into extremely public and uncontrollable tears. In addition to my embarrassment, I bombed that quiz and remember losing sleep over whether that would mean that I would fail the class, then not get into any colleges, and end up permanently unemployable. It was a fully ridiculous set of catastrophic fears that caused me an unnecessary amount of upset. It’s an avalanche of feelings I would love my daughter not to get buried under.

Yet she isn’t going to stop being who she is — nor would I want her to — so the goal for me is to figure out how to support her and also get to a place where my own feelings about her feelings are less overwhelming.

One thing I can do, said Ilyse Dobrow DiMarco, a clinical psychologist and the author of “Mom Brain: Proven Strategies to Fight the Anxiety, Guilt, and Overwhelming Emotions of Motherhood — and Relax Into Your New Self,” is to continue to remind myself that even though we’re similar, my kid and I aren’t the same. “We talk in cognitive behavioral therapy about catastrophizing, which is when we assume that catastrophe is going to ensue,” DiMarco explained.

We shouldn’t catastrophize about our children’s experiences and assume that what they experience will be as bad as what we have felt in our own lives. Just because my daughter and I have traits in common, my kid has “different circumstances, different schools, different peers and different parents,” DiMarco said.

Many kids today have access to mental health resources, DiMarco noted, and are often in environments where talking about feelings is encouraged — something that wasn’t as common when we were growing up decades ago. Though because I was raised by a psychiatrist, we probably talked about feelings more than the typical 1980s family. In fact, my mother was among the first to recognize my daughter’s personality. She might be the only grandmother in history to say about her grandchild, “She has a highly developed superego for a 3-year-old.”

Another parenting strategy is just to give myself space to deal with the inevitable pain. “When it’s something that is so closely identified with your own struggles, it makes sense you are not only going to feel their suffering, but re-experience your own childhood, teenagehood or adult suffering,” said Dr. Pooja Lakshmin, a clinical assistant professor of psychiatry and behavioral sciences at the George Washington University School of Medicine & Health Sciences. I’m usually able to do this; if I find myself getting overwhelmed by my kid’s familiar anxieties, I will try to create some room, once she’s calmed down, to give myself (and her) some mental and physical space.

It’s also good to remind myself that the traits I passed down aren’t all bad, Lakshmin added. Along with her perfectionism, my daughter also inherited my snarky sense of humor and the skepticism of a journalist. She has a million questions for the universe and I can answer them only half of the time, but I relish her curiosity and love to talk to her.

Lakshmin also said something that she feared might depress me, but it actually made me feel better: “There will be ways in which she will have struggles that are completely different. The place you get in trouble is when you automatically assume that because it was terrible for you, it will be terrible for her in the same way. It will probably be terrible for her in different ways.”

A theme that I frequently return to in this newsletter is the ultimate lack of control we have over our kids. We try to offer them a safe haven to return to, but they must experience most of life on their own. This is perhaps the key part of parenting as your children get older — letting them grow away from you, and accepting that their happiness is not completely within your command. I can try to give my daughter strategies for managing her anxieties and be there for her to talk to, but she has to go out there and learn to cope with what’s in her head.

My child is going to have much bigger problems in her life than a lost library book — not to mention that a lost book is a tiny problem to have in a world where families are fleeing their homeland and losing everything overnight. She’ll probably handle some of her problems badly, as I have. But I have endured, and I have to have faith that my daughter will, too.

Want More on Kids and Personality?

Parenting can be a grind. Let’s celebrate the tiny victories.

My child’s list of worries was long and it was getting late. “I’m going to take these worries for you. I’m going to put them in a box for the night. If you want them back in the morning, you can have them, but you don’t need to hold on to them right now. I can hold them,” I said, running my fingers across her eyebrows. She nodded. I pretended to take something from her chest in my hands. I took them away with me. She slept all night.

If you want a chance to get your Tiny Victory published, find us on Instagram @NYTparenting and use the hashtag #tinyvictories; email us; or enter your Tiny Victory at the bottom of this page. Include your full name and location. Tiny Victories may be edited for clarity and style. Your name, location and comments may be published, but your contact information will not. By submitting to us, you agree that you have read, understand and accept the Reader Submission Terms in relation to all of the content and other information you send to us.