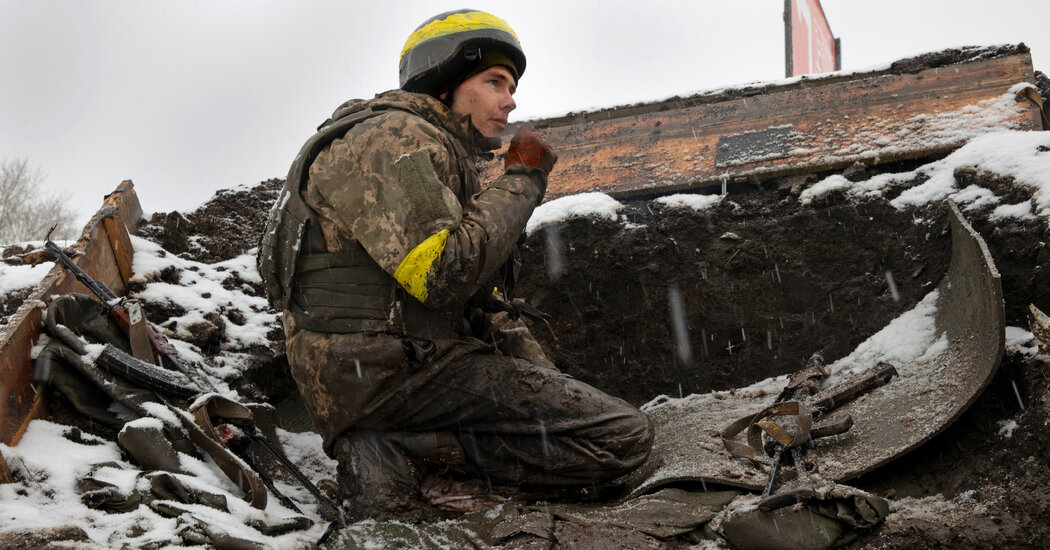 Opinion | Help Ukraine Show Putin the Mistake He Has Made


KYIV, Ukraine — In launching a war on our country, President Vladimir Putin claimed Russia would “de-Nazify” and free Ukraine. But Ukraine — a nation that lost as many as eight million lives in World War II, a country that has a Jewish president — does not need to be freed from the liberated path it has chosen.

Not since the end of World War II has Europe seen violence and naked territorial ambition at such a scale.

I am writing this appeal from a bunker in the capital, with President Volodymyr Zelensky by my side. For a week, Russian bombs have fallen overhead. Despite the constant barrage of Russian fire, we stand firm and united in our resolve to defeat the invaders. We will fight to the last breath to protect our country.

But make no mistake: Other autocrats are watching, taking lessons. They can create a coalition of bad will — just look at how once-peaceful Belarus is now serving as a staging ground for Russian troops.

Listen to what Mr. Putin is saying. For years, the West listened to Mr. Putin but didn’t hear him; it is just now waking up to the existential challenge he poses to the world order. Ukraine has never underestimated his intentions — not since Russian aggression against our country began in earnest in 2014 — nor his willingness to achieve domination by any means necessary.

That’s because we know this war is not just about Ukraine. The Kremlin wants to create a new Russian empire.

We Ukrainians have proved that we are able to effectively repel the invasion force alone. We have used the weapons the West has provided. We are thankful to our American and European friends, to democracies worldwide including Australia and Japan, for their quick decisions to help us, for their sanctions against the Russian economy, for the armaments and equipment to deter the aggressor.

But it’s not enough. We need more — and, please, stop telling us military aid is on the way. Nothing less than our freedom — and yours — is at stake.

In President Zelensky’s call with President Biden on Tuesday, he again appealed for more security, military and humanitarian assistance.

Since 2014, the West’s critical security assistance helped to transform a Ukrainian military that is now capable of mounting a defense and inflicting large-scale casualties against the Russian invaders. Ukraine is not asking for its allies to put boots on the ground. But we need the West to back us up in order to keep defending our families and our land. We need to show Russia — in painful terms — the mistake it has made.

The Russians underestimated our resolve and we’ve held them off for now. But as we speak, a 40-mile-long convoy of Russian troops and equipment is closing in on Kyiv.

We need antitank and antiaircraft weapons and other ammunition delivered to our brave soldiers right now.

We are calling on the West to impose a no-fly zone over Ukraine. We recognize that this would be a serious escalation in the war and that it could bring NATO into direct conflict with Russia. But we firmly believe that Russia won’t stop at just Ukraine, which would potentially drag NATO into this conflict anyway. A no-fly zone would at least give Mr. Putin some pause.

We also ask the West to increase the nonmilitary costs on Russia. We welcome the coordinated measures thus far, but we need more. Every Russian bank — not just a select few — must be cut off from the SWIFT banking system, and every Russian oligarch must be sanctioned. We are also calling for a full embargo on Russian oil and all Russian exports to the United States and Europe. These measures would not be without cost to the world economy, but the alternative is far worse.

The international community should consider expelling Russia from the United Nations or, at the very least, excluding it from the Security Council, where it has a veto.

Russia is waging war on Ukraine to destroy its democracy, its alignment with the West and the spirit of the Ukrainian people. Not content to strangle most political opposition and forms of civic expression within Russia, the ex-K.G.B. clique now running the country is using its position to further a revisionist ideology — one that hungers to reassert Moscow’s control over the former Soviet Union countries and to discredit the democratic world for its failure to stay united and respond. Again, make no mistake: Mr. Putin aims to advance this ideology by going for blood beyond Ukraine. He must be stopped.

The shelling across Ukraine is not letting up; it’s gotten worse here in Kyiv, with women, children and other noncombatants taking refuge in bunkers and subway stations while Russia’s invading forces indiscriminately strike residential buildings and civilians. A high-rise apartment building has been hit, and at least one hospital has been damaged. They have fired rockets into the center of Ukraine’s second-largest city, Kharkiv, and attacked the Chernobyl power plant.

This is Moscow’s way of war. Mr. Putin’s forces will continue to terrorize the country to induce surrender. If they don’t succeed, they will burn it all down. It’s either bow or vanish; no third option is allowed.

This is not going as planned for Russia, however. Everyday Ukrainians are confronting Russian soldiers, blocking tanks with their bodies. Russian forces are experiencing fierce resistance from both the Armed Forces of Ukraine and from Ukrainian citizens hurling homemade Molotov cocktails that Ukraine’s government is encouraging them to make. Ukrainians are defending their streets, their communities, their country and their identity. At the same time, Russian soldiers are surrendering en masse or sabotaging their own vehicles to avoid fighting, according to the Pentagon. They must know this war is unjust.

We beseech our Western allies and partners to make the costs unbearable for Russia now.

Article 4 of the 1994 Budapest Memorandum on Security Assurances guaranteed that the United States, Britain and Russia would seek “immediate” action from the United Nations Security Council “to provide assistance” if Ukraine “should become a victim of an act of aggression or an object of a threat of aggression in which nuclear weapons are used.” Just because the aggressor — Russia — vetoes U.N. Security Council action does not relieve the other parties of the promises they made to Ukraine.

Even though Mr. Zelensky and I cannot be physically alongside every brave Ukrainian fighting for this country, our spirit is with them.

Every day brings the possibility that our words may be our final ones. So let them be a plea for support for a free Ukraine.

We have been able to withstand intense fighting in recent days despite the vicious brutality of the Russian aggressors, and we will continue to fight — even if Russia becomes an occupying force in Ukraine. We are united around the Ukrainian flag, the symbol of our identity, our resolve and our will, but our state’s future and survival largely depend on the West.

This war could be a prologue to a greater European or even global massacre. As President Zelensky wrote on Twitter after a strike hit near Ukraine’s sacred memorial to Jews massacred in World War II, “what is the point of saying ‘never again’ for 80 years, if the world stays silent?”

Standing with us today and helping us is the only way to achieve peace for all and ensure that history does not repeat itself — so that our future does not echo Europe’s darkest time.