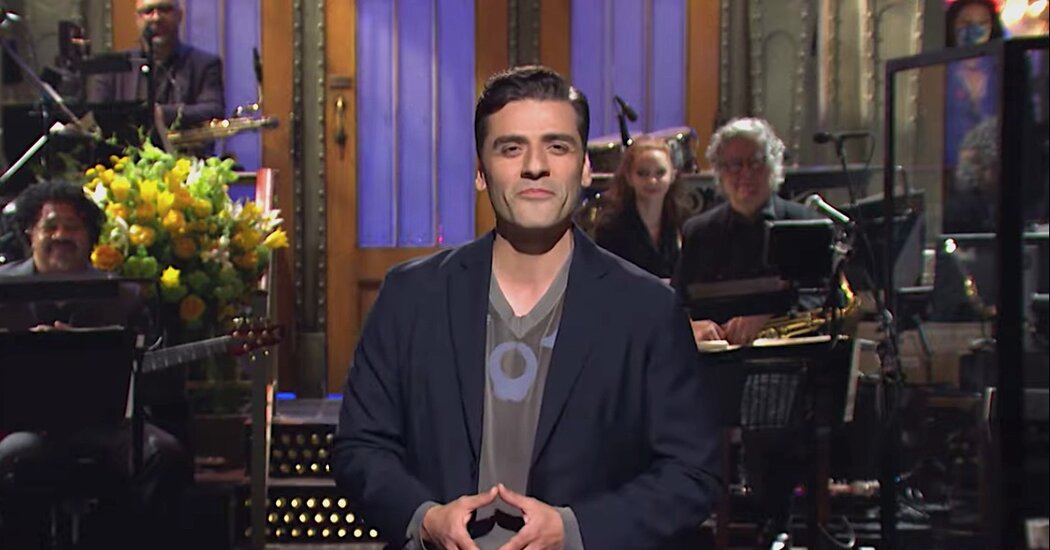 
A comedy sketch that ended with former President Trump performing a fairly sincere rendition of “My Funny Valentine” was not nearly the most baroque moment of this weekend’s “Saturday Night Live,” which was hosted by Oscar Isaac. (That particular honor would go to a routine about singing meatballs, which we’ll get to shortly.)

But for starters, the crooning Trump (played by James Austin Johnson) almost sort of made sense in the context of “S.N.L.”’s open segment, which imagined a fictional telethon, set at Mar-a-Lago and led by the Fox News hosts Tucker Carlson (Alex Moffat) and Laura Ingraham (Kate McKinnon), to make up for their shifting positions on the Russian invasion of Ukraine.

As Moffat explained at the start of the sketch, which was called the “Fox News Ukrainian Invasion Celebration Spectacular,” the cable channel’s personalities had gotten “into a little bit of trouble for all the nice things we said about Russia and the mean things we said about Ukraine.”

McKinnon added, “We did sound pretty awful in hindsight. And foresight.”

Moffat explained, “I kept saying we should be more worried about our own border getting invaded by Mexico. But in my defense, I am racist so I thought that was true.”

They appealed to their viewers to donate to what McKinnon called “the real victims of this invasion: the oligarchs.”

“So please, open your wallets,” Moffat said. “And because this is Fox News, you can either send money or take out a reverse mortgage.”

For their first guest, the hosts introduced the action star Steven Seagal (Bowen Yang), who is a friend of Putin’s.

“As someone who proudly pretends to be both Native American and Japanese, I feel for all people,” Yang explained. “Putin and I are, as they say in ancient Japan, Eskimo brothers.” He gave a short martial arts demonstration and drank from a McDonald’s Shamrock Shake, which he called “the official seasonal beverage of all aikido exhibitions.”

Next up were Donald Trump Jr. (Mikey Day) and Kimberly Guilfoyle (Cecily Strong), who sang their own version of the Lady Gaga–Bradley Cooper duet “Shallow,” from “A Star Is Born.” (Sample lyric: “Tell me something boy / Don’t you love that big Russian convoy?”)

But the real musical star of the sketch was Johnson who, as Trump, concluded it by talk-singing his way through a torchy take on “My Funny Valentine,” which he dedicated to the Russian president, Vladimir Putin. Eat your heart out, Chet Baker?

Fake Accent of the Week

“Inventing Anna,” Netflix’s scripted mini-series about the exploits of the convicted con artist Anna Sorokin (a k a Anna Delvey), has given viewers some rather fanciful takes on how it thinks journalism and law are practiced; it has also yielded the uniquely unplaceable foreign accent adopted by Julia Garner, who plays the title character.

In this filmed segment, Chloe Fineman tries wielding that accent for herself, to see what it will get her at “S.N.L.” Among other perks, she picks up designer clothes, a couch, and an anchor’s seat on “Weekend Update” (not that Michael Che appears particularly bothered to give it up).

Weekend Update Jokes of the Week

Over at the Weekend Update desk, the anchors Colin Jost and Michael Che continued to riff on the domestic and global impact of Russia’s invasion of Ukraine.

Weekend Update Guest of the Week

McKinnon, making a rare appearance as herself and not portraying any character or celebrity, stopped by the Weekend Update desk to discuss a Florida bill that would prevent classroom discussions about sexual orientation and gender identity, and whose critics have called it the “Don’t Say Gay” bill.

At first, McKinnon mistakenly said she supported the bill: “When I was in middle school in the ’90s, I was tortured by the constant use of the word ‘gay,’” she said, explaining that the word was used as an insult. “It made me feel horrible,” McKinnon added, “and to hear that Ron DeSantis has taken a stand and said, ‘No, you cannot say gay at school anymore,’ I’m so jazzed.”

After Jost explained what the bill could actually do, McKinnon withdrew her endorsement: “If the ’90s were right and gay means bad, then this is the gayest law I have ever seen,” she said.

Singing Meatballs of the Week

Finally, as promised, here is the aforementioned segment in which Sarah Sherman plays a woman who wraps her neck in a mysterious green ribbon, Chris Redd plays her too-curious boyfriend, and Isaac, Charli XCX and various cast members play singing meatballs that have grown on Sherman’s body.