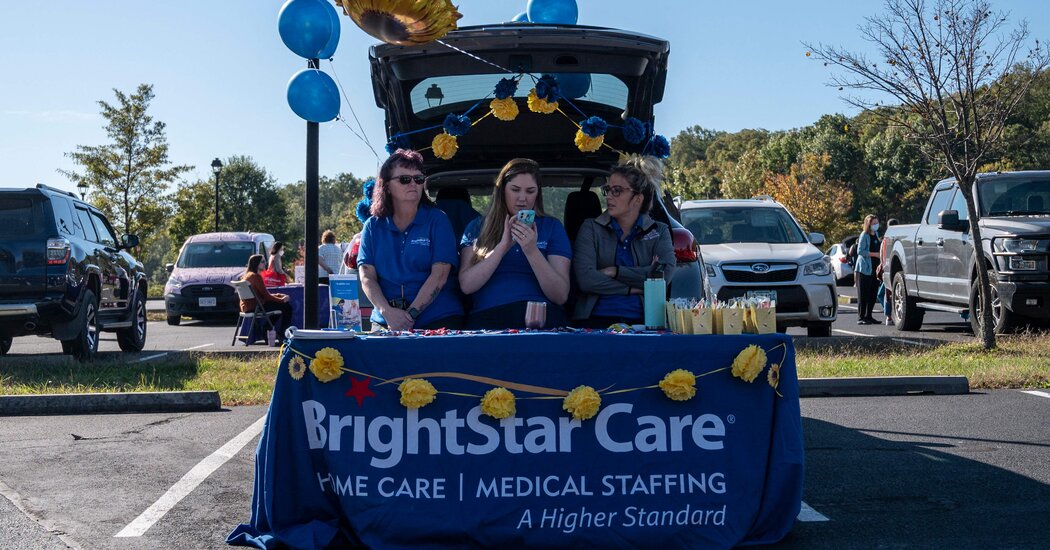 
The story of the American labor market is less murky than it seemed just a few weeks ago. The new jobs numbers present a straightforward, sunny story: Despite it all — the virus variants, the reopening struggles — Americans are going back to work at a rapid clip.

It may not be the kind of off-the-charts job growth experienced in the initial reopening surge last spring and summer. But the new numbers undermine stories that the jobs recovery has petered out, or that the inflationary surge of the last several months is giving way to a period of “stagflation” — stagnant growth paired with higher prices.

Stagnant economies don’t add 531,000 jobs in a month, and they don’t exhibit a low and rapidly falling unemployment rate — 4.6 percent in October, down from 4.8 percent in September and 6.3 percent at the start of the year.

But perhaps more important is what the new numbers tell us about the dynamics of the job market going back a couple of months.

The Labor Department’s revisions to the August and September reports added 235,000 jobs to those months’ numbers. The three-month average for job growth now stands at 442,000. That is a substantial fade from the recent peak of 889,000 jobs added per month from May through July. But it is still a robust pace that implies the labor market is gradually healing from the scars of the pandemic.

The same basic trend is evident in the data from the survey of households that generates the unemployment rate and related data. The two-tenths of a percentage point drop in the October jobless rate might not sound like much, but consider this: In the last expansion, the United States achieved 4.8 percent unemployment in January 2016 — but didn’t reach 4.6 percent until more than a year later, in February 2017.

Indeed, there are lots of signs that this is a hyper-speed recovery compared to the last one. The share of the 25- to 54-year-old workers who are employed jumped 0.3 percentage points in October.

In the last year that share has risen from 76 percent to 78.3 percent. That same shift took about four and a half years in the last expansion, from September 2012 to February 2017.

Put simply, for all the discussion of labor shortages, and the fact that the share of adults who are part of the labor force has remained well below prepandemic levels, employers keep managing to find people to take jobs. The latest numbers undermine any narrative that the pandemic has caused large masses of people to leave the work force permanently, whether because of government stimulus benefits or personal factors.

Employers are paying more to get those workers, it’s worth noting. Average hourly earnings for private-sector workers were up 0.4 percent in October and are up 4.9 percent over the last year. That is high by recent standards, but probably a bit below the inflation rate in that span. (October inflation numbers are not out yet, but for the 12 months ended in September the Consumer Price Index was up 5.4 percent.)

The wage story looks better for rank-and-file American workers. Average hourly earnings for production and nonsupervisory employees have risen 5.8 percent over the last year, which is likely to be higher than inflation was over that span. That is the steepest one-year gain since 1982, other than a couple of months early in the pandemic that featured unusual statistical aberrations.

In short, in order to achieve these gains in employment, companies are being forced to pay significantly higher wages, especially for people at the lower end of the pay scale. To what degree those pay raises turn out to be enough to overcome elevated inflation is an important open question that depends on inflation trends in the months ahead.

There’s no question that the era of high inflation and supply shortages is causing public discontent with the state of the economy, as is evident in President Biden’s approval rating and election results in Virginia and New Jersey this week.

The inflation problem is real, and there’s no doubt it is causing real pain, especially for people whose wages have not kept up with rising prices. But the central problem of the 2010s — a glacial recovery that put people back to work too slowly — is not the reality of the 2020s recovery.