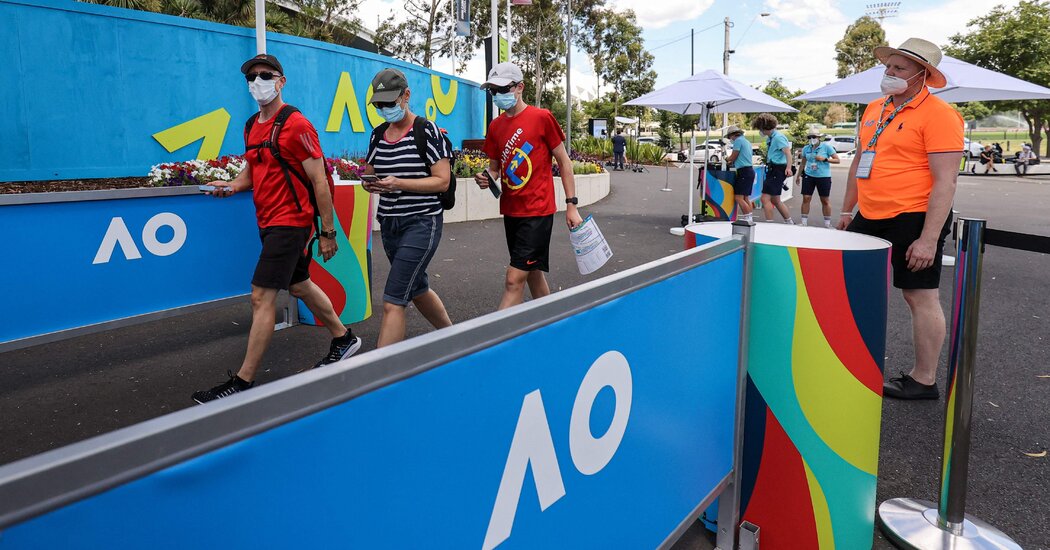 
SYDNEY, Australia — What began as a power struggle between a defiantly unvaccinated tennis star and a prime minister seeking a distraction from his own pre-election missteps has turned into something far weightier: a public stand for pandemic rules and the collective good.

And the sinner of the moment is Novak Djokovic.

Australia — a proud “sporting nation” where the year’s first tennis Grand Slam begins on Monday — hemmed and hawed about Mr. Djokovic for more than a week. Australians didn’t much like how their government had summarily canceled Mr. Djokovic’s visa at the airport. After all their lockdown obedience and vaccine drives, they were also unhappy about the celebrity athlete’s effort to glide into the country while skirting a Covid vaccination mandate.

But then came a stretch of extraordinary revelations that all but erased any popular ambivalence. Mr. Djokovic admitted that he had not isolated himself last month while he apparently suspected, and later confirmed, a Covid infection. And he blamed his agent for a false statement on an immigration document that warned of harsh penalties for any errors.

With that, Australia’s leaders decided they had seen enough. On Friday, the country’s immigration minister canceled Mr. Djokovic’s visa for a second time, putting his bid to win a record 21st Grand Slam title in grave doubt. If Mr. Djokovic, the top-ranked men’s tennis player, does not successfully challenge the decision in court, he will be detained and deported before competing.

In the final tally, a country far from the epicenters of Covid suffering, where sport is a revered forum for right and wrong, has become an enforcer of the collectivist values that the entire world has been struggling to maintain during the pandemic.

Mr. Djokovic sought to play by his own rules. First, he admitted submitting an entry form at the airport that falsely said he had not traveled internationally in the 14 days before he arrived in Melbourne. He had in fact been flying during that time between his native Serbia and Spain. (The misstatement was a “human error,” he said, made by his agent.)

And then there was everything he did during the time he believed he might have been exposed to Covid and eventually, in his telling, tested positive — the Covid diagnosis that enabled his vaccine exemption in the first place.

Five days in December, more or less, sank his chances of winning an unmatched 10th Australian Open, as the world saw what his many critics have described as his selfish and reckless disregard for the health of others.

The tale begins on Dec. 14, when, as a photograph attests, he went to a basketball game in Belgrade, the Serbian capital, with someone who later tested positive for Covid. On Dec. 16, according to an affidavit his lawyers filed in Australian federal court after his first visa was canceled, he took a P.C.R. test that came back positive at 8 that night.

The next day, before he had received the result, he said, he took a rapid antigen test that came back negative. He then attended a junior tennis ceremony in Belgrade, where photographs show him posing without a mask near children.

Later that day, Dec. 17, Mr. Djokovic said he learned about his positive P.C.R. test result. But he did not then go into 14 days of isolation, as the Serbian government requires. The following day, Dec. 18, he did a media interview and a photo shoot at his tennis center in Belgrade. He later said he knew he was Covid-positive, calling it an “error of judgment” to follow through with the interview but saying he had felt “obliged” to.

The journalists involved said they were never told Mr. Djokovic was positive.

Of all his actions, which include a history of other dismissive stances toward the pandemic and sometimes petulant outbursts on the court, his behavior after receiving a positive test seems to be what set the world on edge over his moral compass.

Refusing to get vaccinated was one thing. But withholding the fact that he was infectious?

“For him to do that photo shoot because he didn’t want to disappoint somebody — are you kidding me?” Martina Navratilova said on Australian morning television this week.

“I would be staying home, and you couldn’t pull me out of the house for anything.”

Many Australians saw in Mr. Djokovic’s actions both dishonesty and a disregard for others. Some questioned whether he had really tested positive in the first place, given the convenient timing for his vaccination exemption. They could almost smell the arrogance in his behavior, and they found it rank, especially at this stage of the pandemic.

The community spirit that has defined the country’s virus response — with people grinding through lockdowns and longing for family as borders slammed shut, only to then rush out for vaccines — is in an uncertain place at the moment.

Omicron is surging, and Australians are seeing more deaths daily than at any time since Covid hit. They want the wave to pass. They crave continued solidarity.

Prime Minister Scott Morrison sought to exploit that urge when he pounced on Mr. Djokovic’s first visa cancellation, tweeting barely an hour after it happened on Jan. 6 that “rules are rules.”

He made the point again on Friday evening after the second visa cancellation was announced, four days after a judge had restored it on procedural grounds.

“Australians have made many sacrifices during this pandemic, and they rightly expect the result of those sacrifices to be protected,” he said.

Although the immigration minister, Alex Hawke, cited what he called a risk to public health in canceling Mr. Djokovic’s visa, doctors were less convinced that health was the issue. With tens of thousands of new Covid cases every day in Australia, and sky-high vaccination rates among the vulnerable, one athlete does not pose much of a threat.

“From a medical perspective, you can say, well, what’s the problem?” said Dr. Peter Collignon, a physician and microbiology professor at the Australian National University.

The Novak Djokovic Standoff With Australia

How it started. The standoff began when Djokovic received an exemption that would allow him to defend his Australian Open title. Upon arrival, federal officials said he did not meet the requirements for entry because he was unvaccinated, and canceled his visa.

What happens next. It was unclear what would happen next, with the start of the Australian Open days away. The standoff also presages headwinds he may face if he tries to travel the world without being vaccinated.

But the “Djokovic affair” is no longer — and maybe never was — just about science.

Dr. Collignon said that in the third year of the pandemic, it raised the question of moral judgment. “When do we stop punishing people for making bad decisions?” he asked.

In Australia, the answer is “not yet.”

Now, as before, the decent man is the one who doesn’t infect anyone, as Albert Camus wrote in his 1947 novel “The Plague,” and if the prime minister hadn’t jumped on the cause, someone else probably would have. Mr. Djokovic, 34, placed himself center stage in the arena where Australia often defines what it wants to be as a nation.

Sport is life to many Australians. Participation rates are high, and even watching others compete has been described, for generations, as an activity that builds character.

Character is also what Australia’s Migration Act demands of all migrants. A “character test” sits at the center of a provision that gives the immigration minister the right to deny or cancel a visa for a wide range of reasons, though in this case, he relied on another section that lets the minister reject a visa if it’s “in the public interest.”

The law’s wide scope has often been abused. More than two dozen refugees are still in the same hotel where Mr. Djokovic stayed while waiting for the hearing on his first visa cancellation. Some, like Mehdi Ali, a musician who fled Iran when he was 15, have been held by Australia for many years.

But for Mr. Djokovic, Australia’s tough stance on border security seems to have delivered a result that many people can support, even if it means a less interesting Australian Open.

At Melbourne Park on Friday, where Mr. Djokovic had been scheduled to practice after being named the No. 1 seed, fans seemed resigned to the loss of a player who was fun to watch and hard to admire.

“He has a way of rubbing the Australian public the wrong way,” said Damien Saunder, 44, a cartographer who is the president of a tennis club near Melbourne. “No disrespect for him or his tennis ability and that, but there’s something about him that just doesn’t quite sit with the Australian public.”