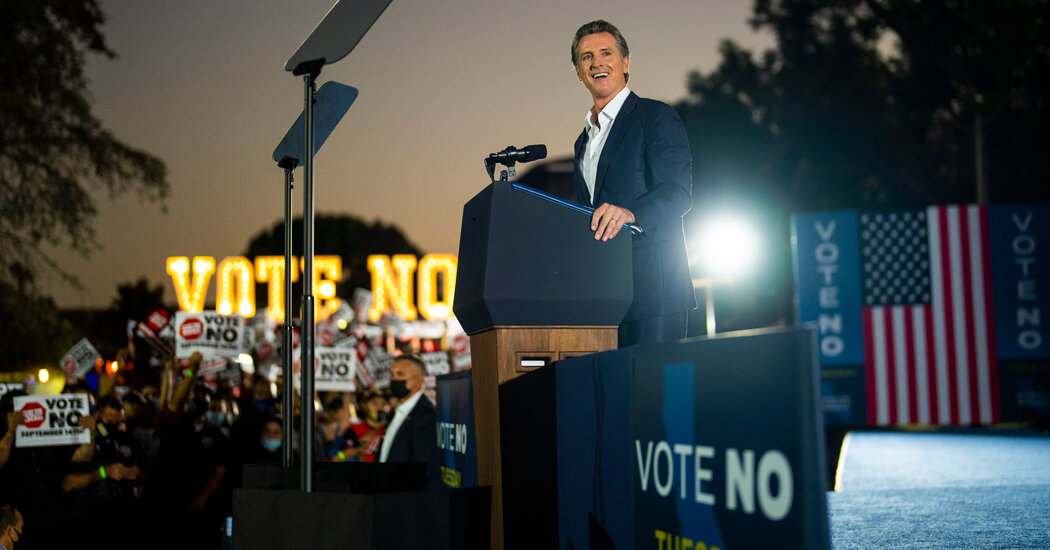 
SACRAMENTO — A Republican-led bid to recall Gov. Gavin Newsom of California ended in defeat late Tuesday, as Democrats in the nation’s most populous state closed ranks against a small grass-roots movement that accelerated with the spread of Covid-19.

Voters affirmed their support for Mr. Newsom, whose lead grew insurmountable as the count continued in Los Angeles County and other large Democratic strongholds after the polls had closed. Larry Elder, a conservative talk radio host, led 46 challengers hoping to become the next governor.

The vote spoke to the power liberal voters wield in California: No Republican has held statewide office in more than a decade.

But it also reflected the state’s recent progress against the coronavirus pandemic, which has claimed more than 67,000 lives in California. The state has one of the nation’s highest vaccination rates and one of its lowest rates of new virus cases — which the governor tirelessly argued to voters were the results of his vaccine and mask requirements.

Although Mr. Newsom’s critics had started the recall because they opposed his stances on the death penalty and immigration, it was the politicization of the pandemic that propelled it onto the ballot as Californians became impatient with shutdowns of businesses and classrooms. In polls, Californians said no issue was more pressing than the virus.

“As a health care worker, it was important to me to have a governor who follows science,” said Marc Martino, 26, who was dressed in blue scrubs as he dropped off his ballot in Irvine.

The Associated Press called the race for Mr. Newsom, who had won in a landslide in 2018, less than an hour after the polls closed on Tuesday. About 66 percent of the eight million ballots counted by 9:30 p.m. Pacific time said the governor should stay in office.

Considered a bellwether for the 2022 midterm elections, the outcome came as a relief to Democrats nationally. Though polls showed that the recall was consistently opposed by some 60 percent of Californians, surveys over the summer suggested that likely voters were unenthusiastic about Mr. Newsom. As the election deadline approached, however, his base mobilized.

President Biden, Vice President Kamala Harris and Senators Elizabeth Warren of Massachusetts and Amy Klobuchar of Minnesota traveled to California to campaign for Mr. Newsom, while Senator Bernie Sanders of Vermont and former President Barack Obama appeared in his commercials. Some $70 million in contributions to his campaign poured in from Democratic donors, tribal and business groups and organized labor.

The governor charged that far-right extremists and supporters of former President Donald J. Trump were attempting a hostile takeover in a state where they could never hope to attain majority support in a regular election. He also contrasted California’s low rates of coronavirus infection with the large numbers of deaths and hospitalizations in Republican-run states like Florida and Texas.

Electoral math did the rest: Democrats outnumber Republicans two to one in California, and pandemic voting rules encouraged high turnout, allowing ballots to be mailed to each of the state’s 22 million registered, active voters with prepaid postage.

Initiated by a retired Republican sheriff’s sergeant in Northern California, Orrin Heatlie, the recall was one of six conservative-led petitions that began circulating within months of Mr. Newsom’s inauguration.

Recall attempts are common in California, where direct democracy has long been part of the political culture. But only one other attempt against a governor has qualified for the ballot — in 2003, when Californians recalled Gov. Gray Davis on the heels of the Sept. 11 attacks, the dot-com bust and rolling electricity blackouts. They elected Arnold Schwarzenegger to replace Mr. Davis as governor, substituting a centrist Republican for a centrist Democrat.

Initially, Mr. Heatlie’s petition had difficulty gaining traction. But it gathered steam as the pandemic swept California and Mr. Newsom struggled to contain it. Californians who at first were supportive of the governor’s health orders wearied of shutdowns in businesses and classrooms, and public dissatisfaction boiled over in November when Mr. Newsom was spotted mask-free at the French Laundry, an exclusive wine country restaurant, after urging the public to avoid gatherings.

A court order extending the deadline for signature gathering because of pandemic shutdowns allowed recall proponents to capitalize on the outrage and unease.

As the outcome in Tuesday’s recall election became apparent, Darry Sragow, a Democratic strategist and publisher of California Target Book, a nonpartisan political almanac, said the governor held off “a Republican mugging” and “could come out of this stronger than ever, depending on his margin.”

“We were David against Goliath — we were the Alamo,” said Mike Netter, one of a handful of Tea Party Republican activists whose anger at Mr. Newsom’s opposition to the death penalty, his embrace of undocumented workers and his deep establishment roots helped inspire the attempted ouster.

The recall campaign, the two men said, had expanded the small cadre that began the effort into a statewide coalition of 400,000 members who are already helping to push ballot proposals to fund school vouchers, forbid vaccine mandates in schools, and abolish public employee unions, which have been a longstanding Democratic force in California.

Other Republicans, however, called the recall a grave political miscalculation. About one-quarter of the state’s registered voters are Republicans, and their numbers have been dwindling since the 1990s, a trend that recall proponents believed might be reversed if they could somehow flip the nation’s biggest state.

Tuesday’s defeat instead marked “another nail in the coffin,” said Mike Madrid, a California Republican strategist who has been deeply critical of the party under Mr. Trump, charging in particular that the G.O.P. has driven away Latino voters.

Mr. Madrid said the recall signified that, even in California, Mr. Trump’s party had become part of “an increasingly radical, exercised and shrinking Republican base, lashing out in different ways in different parts of the country.” He took note of the voter fraud accusations that some in his party began to make well before the polls closed, echoing Mr. Trump, who claimed without evidence that Democrats had “rigged” the recall election.

Despite the yawning gap in support, for example, Mr. Elder demanded this week, before the voting was finished, that a special legislative session be called “to investigate and ameliorate the twisted results.” He said there had been “instances of undocumented ballots” but provided no examples.

Some Democratic observers were circumspect, warning that the disruption caused by the recall effort hinted at deeper problems.

“This recall was a canary in the coal mine,” said Mr. Sragow, a veteran Democratic strategist who cited the state’s income disparities, housing shortages and climate crises. “And until the issues that created it get dealt with, people in power are in trouble. There’s a lot of anger and fear and frustration out there.”

Tuesday’s vote capped a nearly yearlong push by the governor to persuade voters to see beyond that darkness. Since early this year, when it became clear that the recall would have the money and time to qualify for the ballot, Mr. Newsom has campaigned relentlessly.

Taking advantage of a huge state surplus — a result of higher-than-expected gains in income and stock prices for affluent Californians — the governor moved aggressively to demonstrate that the state could both protect its economy and curb the virus. In recent months, he has rolled out vaccinations, cleaned up trash in neighborhoods neglected by pandemic-worn Californians, thrown motel rooms open to homeless Californians, announced stimulus checks and rent assistance for poor and middle-class Californians and stood repeatedly in front of a gold lamé curtain to host one of the nation’s largest vaccine lotteries.

Like Scott Walker, the former governor of Wisconsin and the only previous governor to prevail in a recall election, Mr. Newsom painted the recall effort in national, partisan terms and rejected a defensive posture. His strategy galvanized major donors and his base.

As in 2003, when he ran against a popular progressive for mayor of San Francisco, Mr. Newsom framed the race not as a referendum on him but as a choice between himself and a potentially catastrophic alternative — in this case, Mr. Elder, whose name recognition quickly vaulted him to the top of the list of challengers.

Noting that Mr. Elder had built a career bashing liberal causes, the governor painted him as a Trump clone who would foist far-right policies on a state that has been a bastion of liberal thinking.

“Vote no and go,” the governor told voters, suggesting that they stick to voting against recalling him and not even dignify the second question on the ballot, which asked who should replace Mr. Newsom if the recall succeeds.

California has no limits on donations to committees for and against recalls, but the state caps contributions to candidates from individual donors. Mr. Newsom capitalized on the rules, raising more than $50 million just in donations of more than $100,000 to oppose the recall. Mr. Elder raised about $15 million, with even less raised by committees promoting the recall.

Many major Republican donors said it seemed futile to try to recall a Democratic governor in such an overwhelmingly liberal state.