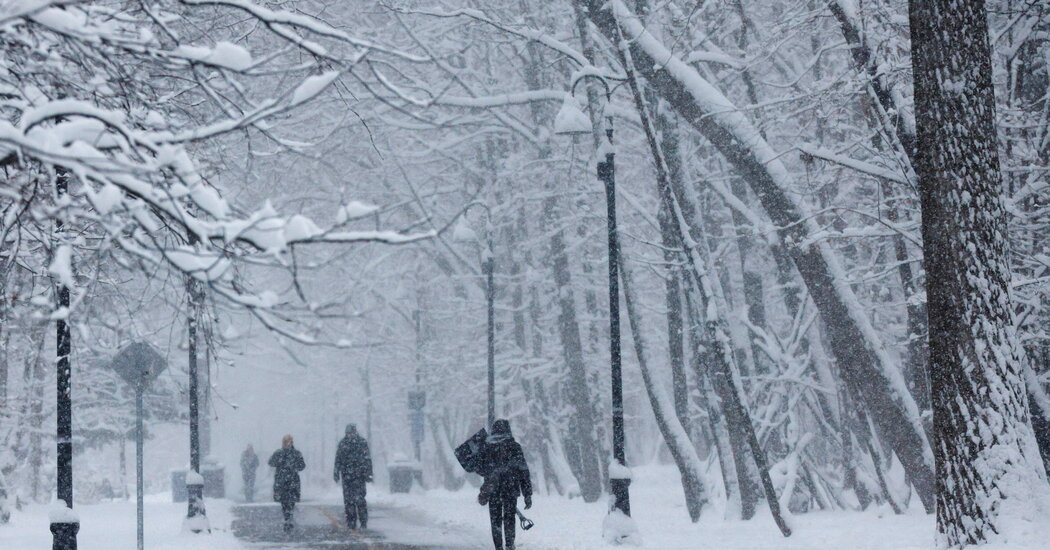 New York Gets Its First Major Snow of the Season


A winter storm blew across the Northeast overnight on Friday, dropping the first significant snowfall of the winter on New York City and creating treacherous conditions for the morning commute.

Snow fell heavily in the pre-dawn hours in the New York region and parts of New England, causing flight delays and cancellations at airports and slowing traffic and train service. New York City’s schools remained open, but the storm prompted school closings and delays across the region.

At least five inches of snow blanketed the city and surrounding areas. By 7 a.m., Central Park in Manhattan had received 5.5 inches of snow and La Guardia Airport in Queens had 8.4 inches, according to the National Weather Service.

In midmorning, elected officials started lifting restrictions on driving on highways after they had urged commuters to stay off the roads and work from home if they could. The Metropolitan Transportation Authority, which operates the New York subway, said its crews were working to keep trains and buses running.

“If you must travel, use extra caution, plan extra time and check service status before you go,” the authority advised Friday morning.

The Metro-North Railroad, which is operated by the authority and serves suburbs north of the city, was operating on a Saturday schedule because of the storm. At 8 a.m., the Port Authority of New York and New Jersey suspended all service on the PATH commuter train system because of smoke on the tracks at the World Trade Center. The agency later restored some service.

The National Weather Service issued a winter weather advisory through noon for the New York region, warning that roads would be slippery and urging drivers to be cautious.

In New Jersey, Gov. Phil Murphy declared a state of emergency that began at 10 p.m. Thursday and he ordered state offices to delay opening until 11 a.m. On Friday morning, he said there had been 90 accidents on the state’s roads during the storm.

“Roads are going to be challenging,” Mr. Murphy said in an interview on News12 New Jersey. But he said that “this storm has played out almost exactly as it was expected to play out,” unlike the ice storm on Tuesday that made the morning commute hazardous that day.

Snowplows were clearing the streets of New York City for the first time this winter, according to a spokesman for Eric Adams, the city’s new mayor. The city was spared by a storm earlier in the week that dumped up to a foot of snow on parts of the Mid-Atlantic States, including Atlantic City and other areas along the New Jersey shore.

The storm presented an early challenge for Mr. Adams, who was sworn in on New Year’s Eve. He conferred with his emergency management team at 4 a.m., the spokesman said.

Airlines canceled hundreds of flights at the three major airports that serve New York City, but it was not clear how many of those cancellations resulted from the storm. In recent weeks, airlines have canceled thousands of flights across the country because of inadequate staffing caused in part by the rapid spread of the Omicron variant of the coronavirus.

In New England, winter storm warnings were issued for most of eastern Massachusetts and nearly all of Rhode Island. Farther north, a portion of Maine was under a blizzard warning.

The Washington area, slammed just days ago with more than eight inches of snow, was expected to get another round, with the Weather Service forecasting up to four inches. Federal offices in Washington would be closed on Friday, officials said.

Some school districts along the Interstate-95 corridor, already facing growing concerns amid rising Covid-19 cases, adjusted their operations for Friday. Mayor Muriel Bowser of Washington announced that schools would be closed because of the storm. Public schools in Philadelphia were shifting to remote learning, while several districts in New Jersey were either closing for the day or were operating on a delay.

The new storm system comes on the heels of a wintry wallop that coated roads with snow and ice, set new daily snowfall records, knocked out power for half a million people, jammed roads for miles and stranded drivers overnight in their cars along Interstate 95 south of Washington.

The Boston area was blanketed in fine, fluffy snow overnight, with accumulations of up to seven inches by Friday morning in some places. The city was expected to reach 10 or 11 inches of accumulation, something that occurs “every year or so,” said Bill Simpson, a meteorologist with the National Weather Service.

Driving was treacherous. Speed limits on parts of the Massachusetts Turnpike were lowered to 40 miles an hour, but morning commuters described creeping past spinouts and accidents as plows struggled to keep up with the swiftly falling snow. The Massachusetts Department of Transportation had deployed nearly 2,500 plows, front-end loaders and other pieces of snow-clearing equipment overnight, and urged motorists to stay off the roads.

Rhode Island was already starting to see heavy snowfall by early Friday morning, with snow covering roads and complicating morning commutes across the state. The state’s Department of Transportation reported a few crashes on roadways in Providence and Lincoln in the early morning hours, just after snow began to fall in the area.

In preparation for the storm, Rhode Islanders were out shopping the night before. Many shelves at East Side Market, a grocery store in Providence, were empty or thoroughly picked through by Thursday night.

At Bottles Fine Wine next door, one worker, Austin McDannell, 24, said he saw more customers than usual stop by during their lunch breaks Thursday to pick up provisions. He said he wasn’t sure if the store would open Friday morning, but his fiancé’s job at a beauty school in Cranston had already canceled work for Friday, and said if he had to hunker down in his home in Providence, he’d catch up on TV. “There’s always Netflix,” he said.

In Westerly, a seaside community on the Connecticut border that forecasters predicted could see 5 to 10 inches of snow during the course of the storm, the school district gave students and teachers a full snow day, without remote learning, the school’s superintendent, Mark Garceau, said. A message on the school’s website urges students to “go sledding, build a snowman.”

The snowy weather comes as the United States — from Montana to Colorado to Kentucky to Massachusetts — is facing a shortage of snow plow drivers, which has complicated removal efforts.

Officials have blamed the shortage partly on broader labor conditions; truck drivers have been in demand for years, and the industrywide shortage has reached record highs in recent months. A surge in the Omicron variant has worsened the situation, forcing some snow plow drivers to call out sick.

Some areas are going to great lengths to attract drivers. Watertown, Mass., is paying $200 per hour to drivers with a commercial license, with rates increasing as high as $310 if they have specialized equipment, The Boston Globe reported in November.

Reporting was contributed by Ellen Barry from Boston, Colleen Cronin from Rhode Island and Daniel Victor from London.