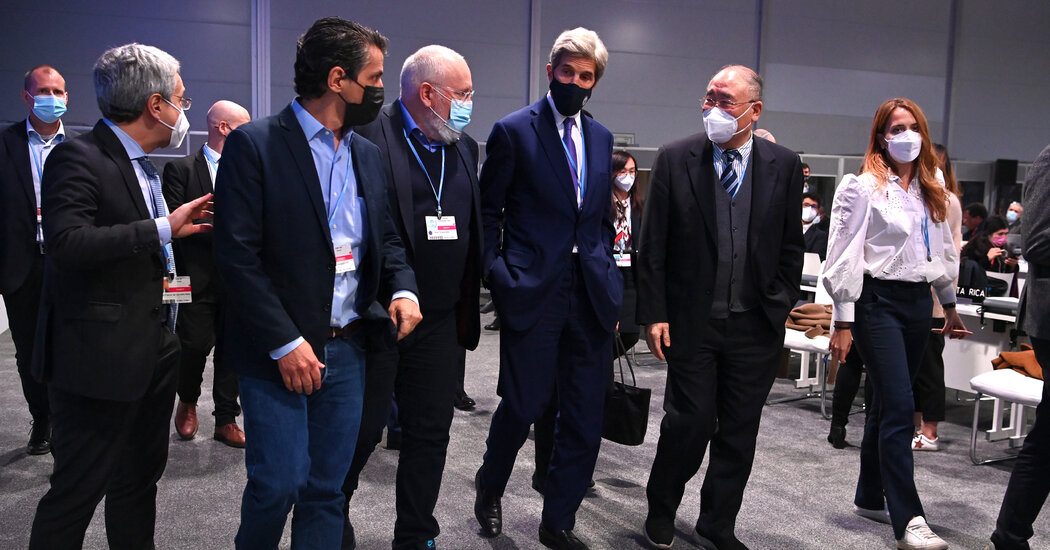 
GLASGOW — Diplomats from nearly 200 countries on Saturday struck a major agreement aimed at intensifying global efforts to fight climate change by calling on governments to return next year with stronger plans to curb their planet-warming emissions and urging wealthy nations to “at least double” funding to protect poor nations from the hazards of a hotter planet.

The new deal will not, on its own, solve global warming, despite the urgent demands of many of the thousands of politicians, environmentalists and protesters who gathered at the Glasgow climate summit. It leaves unresolved the crucial question of how much and how quickly each nation should cut its carbon dioxide and other greenhouse gases over the next decade. And it still leaves many developing countries far short of the funds they need to cope with increasing weather disasters.

The talks underscored the complexity of trying to persuade scores of countries, each with their economic interests and domestic politics, to act in unison for the greater good.

But the agreement established a clear consensus that all nations must do much more, immediately, to prevent a catastrophic rise in global temperatures. And it set up transparency rules to hold countries accountable for the progress they make or fail to make.

John Kerry, the United States climate envoy, entered the plenary hall Saturday evening with his arm around the shoulder of Xie Zhenhua, China’s chief climate negotiator. Last minute deal-making could be seen on the floor as Mr. Xie and Mr. Kerry huddled, mask to mask, with Alok Sharma, the British politician who led the U.N. summit.

Architects of the agreement hoped it would send a powerful signal to capitals and corporate boardrooms across the globe that more ambitious action on climate change is inevitable, which could in turn would empower civil society groups and lawmakers working to shift countries away from burning oil, gas and coal for energy in favor of cleaner sources like wind, solar and nuclear power.

“The train is moving and all countries need to get on board,” said Ani Dasgupta, president of the World Resources Institute. “If the world is going to beat back the climate crisis, no one can sit on the sidelines.”

Yet many others said the deal failed to meet the moment, in a year of deadly heat in Canada, devastating floods in Germany and New York, and raging wildfires in Siberia. At the start of the two-week summit, leaders, including President Biden and Prime Minister Boris Johnson of Britain, framed the meeting as the world’s last, best chance to save the planet.

The deal is “not in line with the urgency and scale required,” said Shauna Aminath, environment minister of the Maldives, an archipelago of low-lying islands in the Indian Ocean that has been inhabited for thousands of years but could be inundated within three generations because of rising seas. “What looks balanced and pragmatic to other parties will not help the Maldives adapt in time. It will be too late for the Maldives.”

In the final hours of talks Saturday night, negotiators clashed over wording that would have called on countries to “phase out” coal power and government subsidies for oil and gas. Fossil fuels have never been explicitly mentioned in a global climate agreement before, even though they are the dominant cause of global warming. Eventually, at the urging of India, which argued that fossil fuels were still crucial for its development, “phase out” was changed to “phase down.”

Going into the summit, world leaders said their ultimate goal was to prevent Earth from heating more than 1.5 degrees Celsius, or 2.7 degrees Fahrenheit, compared to preindustrial levels. Past that threshold, scientists have warned, the risk of deadly heat waves, destructive storms, water scarcity and ecosystem collapse grows immensely. The world has already warmed 1.1 degrees Celsius.

But even as countries vowed to step up their climate efforts both before and during the Glasgow summit, they are still falling far short.

The detailed plans that governments have made to curb fossil-fuel emissions and deforestation between now and 2030 would put the world on pace to warm by roughly 2.4 degrees Celsius this century, according to analysts at Climate Action Tracker, a research group.

“Countries still don’t seem to understand that we’re in an emergency situation and we need to cut emissions much faster this decade, or else any hope of staying at 1.5 degrees will be lost,” said Niklas Höhne, a German climatologist and founding partner of NewClimate Institute, which created the Climate Action Tracker.

A major focus of this year’s talks was how to push countries to do more. Under the last big climate deal, the Paris climate agreement in 2015, governments weren’t formally scheduled to come back with new climate pledges until 2025, which many experts said was far too late for a major course correction.

The new agreement in Glasgow asks countries to come back by the end of next year with stronger pledges to cut emissions by 2030. It also states clearly that all nations will need to slash their carbon dioxide emissions nearly in half this decade to hold warming below 1.5 degrees Celsius.

But it remains to be seen if countries follow through — there are no sanctions or penalties if they fail to do so. Ahead of Glasgow, some governments like the United States and European Union did step up their climate pledges under the Paris Agreement. But others — like Australia, China, Brazil and Russia — barely improved on their short-term plans.

Money, meanwhile, remained a huge sticking point in the talks.

A number of swiftly industrializing countries, such as India and Indonesia, have said they would be willing to accelerate a shift away from coal power if they received financial help from richer countries. But so far, that help has been slow to arrive.

A decade ago, the world’s wealthiest economies pledged to mobilize $100 billion per year in climate finance for poorer countries by 2020. But they are still falling short by tens of billions of dollars per year.

At the same time, only a small fraction of that climate aid to date has gone toward measures to help poorer countries cope with the hazards of a hotter planet, such as sea walls or early-warning systems for floods and droughts. According to one 2017 study, some African nations are spending up to 9 percent of their gross domestic product on adaptation, while still only addressing about one-fifth of their needs.

The new agreement tries to fill in some of those gaps. It calls out rich countries for failing to meet the $100 billion goal and urges them to “at least double” finance for adaptation by 2025. It also sets up a process for figuring out a collective goal for long-term finance, although that process could take years, and developing countries say they may ultimately need trillions of dollars by the end of the decade.

Tina Stege, the climate ambassador for the Marshall Islands, called the promises for more money “a step toward helping countries like mine who must transform our very physical environment in the coming years to survive the onslaught of climate change.”

Even as vulnerable countries like Bangladesh or the Marshall Islands pleaded for more climate aid at the summit, they also said that they would not be able to adapt to every hurricane or famine worsened by climate change.

Since those nations have contributed little to global warming to date, they sought a separate stream of funding to help them rebound from the disasters to come, paid for by industrialized nations like the United States and the European Union that are historically responsible for most of the extra greenhouse gases now heating the atmosphere. In diplomatic speak, this is known as “loss and damage.”

Wealthy nations have long opposed these efforts, fearing that they could open the door to a flood of liability claims. At Glasgow, they again blocked efforts to establish a new mechanism for loss and damage, although they did agree to initiate a “dialogue” on the issue in future talks.

“The needs of the world’s vulnerable people have been sacrificed on the altar of the rich world’s selfishness,” said Mohamed Adow, an activist with Power Shift Africa. But, he added, “loss and damage is now up the political agenda in a way it was never before and the only way out is for it to be eventually delivered.”

Separately, negotiators at Glasgow announced a major deal on how to regulate the fast-growing global market in carbon offsets, in which one company or country compensates for its own emissions by paying someone else to reduce theirs. One of the thorniest technical issues is how to properly account for these global trades so that any reductions in emissions aren’t overestimated or double-counted.

The summit provided some other reasons for optimism, although with caveats.

On the sidelines at the talks, clusters of countries announced initiatives they were undertaking on their own to speed up action on climate change. More than 100 countries agreed to cut emissions of methane, a potent planet-warming gas, by 30 percent this decade. Another 130 countries vowed to halt deforestation by 2030 and commit billions of dollars toward the effort. Dozens of other countries vowed to phase out their coal plants and sales of gasoline-powered vehicles over the next few decades.

Activists noted that those promises were voluntary and often didn’t include major emitters like China. But others argued they could pressure heads of state and titans of industry to do more.

“If you tried to get every single country to agree to get rid of internal combustion engines through the formal U.N. process, you’d get nowhere,” said Nigel Topping, who was chosen by the United Nations as its “high level climate action champion.” “But if you get a bunch of countries and major automakers to stand up and say, ‘we’re doing this,’ it starts forcing the market, and pretty soon more and more companies start signing on. We need exponential change and this is how it starts.”

On top of that, most major economies have now pledged to reach “net zero” emissions by a certain date, essentially a promise to stop adding greenhouse gases to the atmosphere. The United States and European Union said they would do so by 2050, China by 2060. At Glasgow, India joined the chorus, saying it would reach net zero by 2070.

When analysts at Climate Action Tracker looked at these additional promises, it estimated that the world could conceivably limit global warming to 1.8 degrees Celsius by 2100, although, so far, most countries haven’t put the policies in place to get there.

Calculations like that persuaded many politicians and environmentalists that the dream of limiting global warming to 1.5 degrees might yet be in reach, as long as governments can be pressured to follow through on what they’ve promised.

“It’s meek, it’s weak and the 1.5 Celsius goal is only just alive, but a signal has been sent that the era of coal is ending,” said Jennifer Morgan, executive director of Greenpeace International. “And that matters.”

Experts widely agreed that the hardest part is yet to come. No international agreement, on its own, can solve climate change. At best global climate summits can force countries to be transparent about what they are doing, offer the public a way to assess their progress, and outline what more needs to be done.