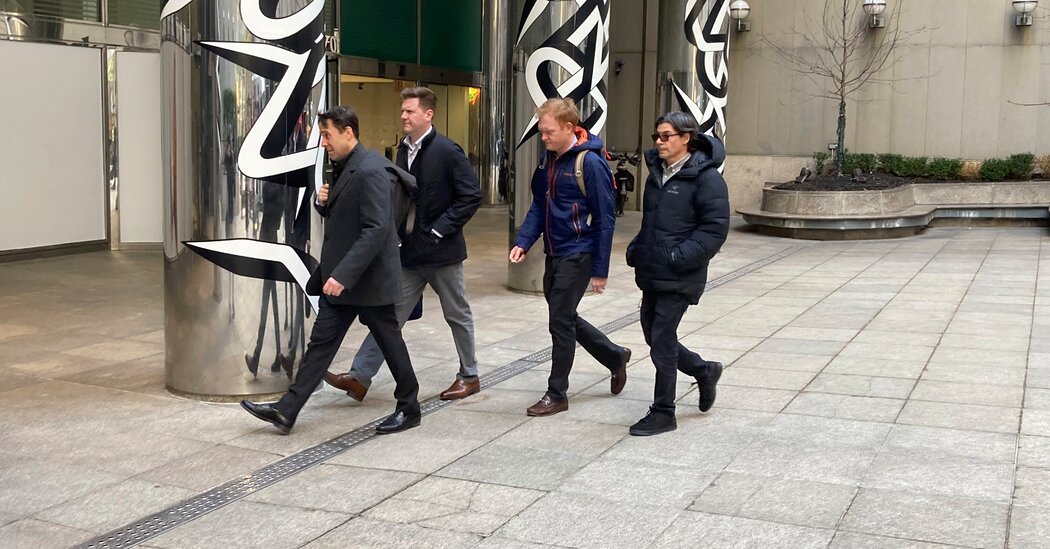 
Seven days after Major League Baseball Commissioner Rob Manfred canceled a week of regular season games because the league didn’t have a labor agreement with players in place to start the 2022 season, M.L.B. gave the players’ union a new deadline, with a slightly different position than before.

During talks on Monday, league officials told their union counterparts that Tuesday was the new target by which to strike a collective bargaining agreement to squeeze in a 162-game season, which would come with full pay and service time for players, said two people familiar with the matter who spoke on the condition of anonymity given the sensitive nature of the negotiations.

But if no pact was reached on Tuesday night, M.L.B. had been expected to do what it did last week: Cancel regular season games. If that were to happen — an extra week of cancellations was on the table — the sides would have a much harder road ahead: It is unlikely that there would be enough time to reschedule two weeks’ worth of games while keeping the same dates for the World Series in October. In M.L.B.’s eyes, lost games equals less revenue for their clubs, and thus they do not believe they would have to compensate players for those missed contests.

So for the third time in roughly a week, the sides — which have been at odds for months — were on the clock. Each hunkered down at their respective offices in Manhattan, and they continued negotiating deep into the night, building enough momentum to keep talking into the wee hours of Wednesday morning. A little after 3 a.m. Eastern time, a league official said that the union requested time to speak to its board in the morning regarding M.L.B.’s latest proposal and would get back to the league later Wednesday morning.

M.L.B. brought the league to a standstill on Dec. 2 by locking out the players upon the expiration of the previous five-year labor agreement. Manfred said then that he was doing so as a defensive move to protect the 2022 season. And early last month, he said losing regular season games would be “disastrous” for the industry.

Neither outcome has been avoided. This season was scheduled to begin on March 31. Sensing urgency to strike a deal in time to accommodate M.L.B.’s timeline for the season, the sides met in Florida starting Feb. 21 for what turned into nine straight days of negotiating.

When a little momentum was made over 16 ½ hours of talks on Feb. 28 — the final day of negotiations ahead of an ultimatum — M.L.B. extended its self-imposed deadline until 5 p.m. the next day. But players rejected the league’s so-called best and final offer ahead of the deadline, believing it still didn’t sufficiently address their concerns. Soon after 5 p.m., Manfred called off the first two series of the season for all 30 teams — roughly 75 games through April 6.

Since returning to New York, where both organizations are headquartered, M.L.B. and the union have met and exchanged proposals, including multiple times on Tuesday.

On Sunday, after hearing the players’ latest offer, which had modest tweaks, M.L.B. said it had been hoping to see more movement in its direction to get a deal done quickly and it claimed the union had actually gone backward on some issues.

“Simply put, we are deadlocked,” M.L.B. spokesman Glen Caplin said. “We will try to figure out how to respond, but nothing in this proposal makes it easy.”

M.L.B. did respond on Monday, offering some progress for the players on one of the biggest sticking points of these negotiations: the luxury tax system. Reluctant to raise thresholds because they believe the figures help preserve competitive balance among clubs, the owners offered to increase the first threshold by $8 million from their previous offer, to $228 million in 2022, and rising to $238 million in 2026 — the largest proposed increases from one agreement to the next in baseball history.

The first threshold — the payroll number at which teams incur penalties — in 2021 was $210 million. Arguing that the thresholds have not grown at the same rate as revenues and that clubs treat the luxury tax like a salary cap to limit spending, players have pushed for higher numbers. As of Sunday, the players were asking for the first threshold to start at $238 million in 2022 and jump to $263 million in 2026.

Like all proposals, certain olive branches toward the other side have come in a package of offers that act as a counterbalance. For example: M.L.B.’s offer of increased thresholds on Monday was attached to other items that players would have to weigh.

The past two collective bargaining agreements were viewed as having further tilted the balance of power and economics in the owners’ favor. Realizing that significant changes to the system would be tense and full of brinkmanship, the union has spent years building a rainy-day fund for this very fight against M.L.B. owners, who ran an $11 billion-a-year business before the coronavirus pandemic.

While owners believe players have a fair system without a hard salary cap, players have been seeking a series of changes, from improving competition to injecting more spending that is commensurate with club revenues to paying younger players more earlier in their careers.

M.L.B. has listened and offered ways to better compensate younger players — such as a raised minimum salary and a new bonus pool for players not yet eligible for the raises given in salary arbitration — and a few new measures that might help curb some service-time manipulation or tanking, like a draft lottery.

To get this far, the union has since dropped some of its biggest original asks: giving players the chance to reach salary arbitration and free agency sooner. There has been some compromise on expanding the playoffs. But entering Tuesday, other disagreements remained, such as the size of the bonus pool or the implementation of an international draft.

On Tuesday, Apple announced a deal with M.L.B. to exclusively air a weekly doubleheader of games on Fridays during the season — a new revenue stream for owners as they negotiate with the players.

If a deal cannot be reached, and a full 162-game season cannot be rescheduled, this would be the first time games were lost to a work stoppage since the 1994-95 players’ strike.