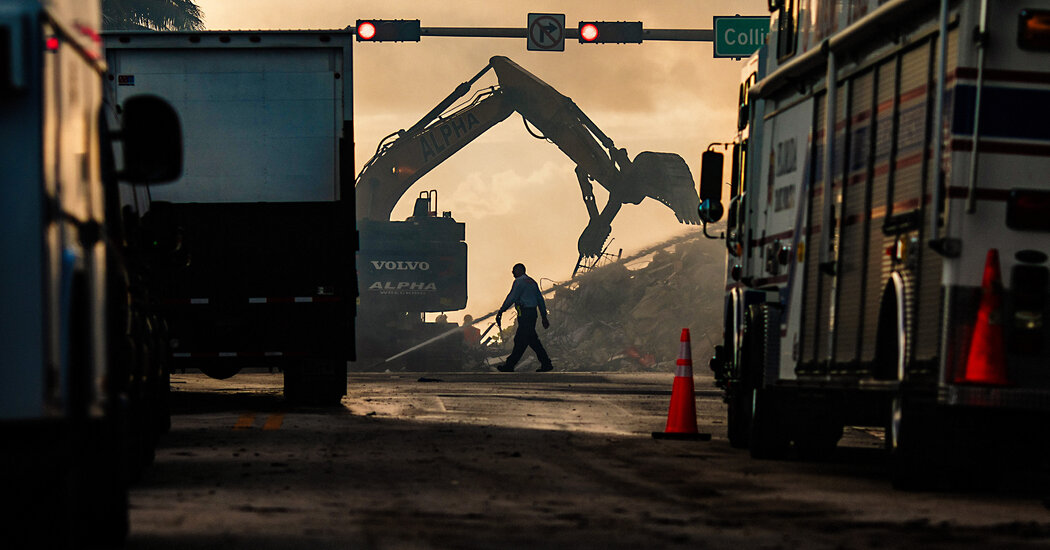 As the sun rose on Saturday, rescue workers entered the third day of an increasingly desperate search for anyone who might still be alive within the giant pile of broken concrete and twisted metal that once was a condominium building north of Miami Beach.

Four people have been confirmed dead, but the fate of 159 others remained unknown, and their family members clung to thinning threads of hope.

Not a single survivor was found on Friday in the smoking debris of the Champlain Towers South condominium in Surfside, Fla., and the families of the missing wrestled with growing dread. At least seven children were among those still unaccounted for.

“I don’t know what to think,” said Sergio Barth, whose brother Luis Barth was believed to have been in the building with his wife and 14-year-old daughter when it collapsed shortly after midnight on Thursday. “I mean, there is, I think, resignation here, with just a little, little, little esperanza — you know, hope. Miracles happen. So until the authorities say the investigation is closed, we have to keep thinking positive.”

Rachel Spiegel had kept vigil near the rubble pile, eyes fixed on the area where Unit 603, the sixth-floor condo belonging to her mother, Judy Spiegel, 66, had likely crashed to earth. “I know where my mom is,” she said. While the cause of the collapse remained unknown, the town released documents late on Friday showing that an engineering consultant warned the building’s owners two years ago about “major structural damage” to the concrete slab below the pool deck, as well as extensive cracking and crumbling of the columns, beams and walls of the parking garage under the 13-story structure. The engineer, Frank Morabito, did not say the building was in danger of collapse, but he did say repairs were needed to ensure its “structual integrity.”

After two initial rescues, only bodies have been found. The first victim to be identified was Stacie Fang, 54, whose teenage son, Jonah Handler, was pulled safely from the rubble in the early hours of the disaster. Family members of the missing were asked to provide DNA swabs in case they were needed to identify remains.

All day and into the night on Friday, rescuers worked through thunderstorms that left pockets of flooding, and grappled with on-and-off fires whose smoke hung over the unstable pile of rubble. Dousing them was out of the question, so emergency workers tore through the debris to get to the source of the flames and pull it away.

Search-and-rescue teams burrowed underneath the debris from a parking garage, drilling through concrete and inserting probes with cameras to peer through the rubble. Specialized hearing devices alerted them to sounds that might mean people were still alive and trapped — tapping scratching, falling debris and twisting metal.

Above, two cranes gingerly removed debris from the pile on Friday with metal claws. When they paused, firefighters with red buckets clambered up to dig by hand.

The rescue workers also used dogs and sonar equipment, but the debris pile was unstable and it was slow going, officials said. “They are in the tunnels. They’re in the water. They’re on top of the rubble pile,” Mayor Daniella Levine Cava of Miami-Dade County told CNN on Friday night.

A team of federal investigators from the National Institute of Standards and Technology was dispatched to the disaster site on Friday to begin piecing together causes of the collapse.

The investigators will look for corroded components, an undermined foundation or defects in the construction or design, engineering and architectural experts said.

The building — a 13-story structure at 8777 Collins Avenue — was about to undergo extensive repairs for corrosion and concrete spalling, or flaking, as part of a required rehabilitation for buildings when they reach 40 years of age. It is also on a plot where the land is sinking in ways neighboring properties are not.

“We have to understand the landscape of a disaster,” one of the engineering experts on the federal team, Sissy Nikolaou, said in an interview.

Engineering and architectural experts said that it might take a long time to piece together what caused the partial collapse of the condo building near Miami, but that there were a few things that investigators would look for: corroded components, an undermined foundation or defects in the construction or design.

“When a building falls downward on itself it’s more likely that there was a loss of support somewhere,” said Abieyuwa Aghayere, a professor of civil, architectural and environmental engineering at Drexel University.

The Champlain Towers South building in Surfside, Fla., was about to undergo extensive repairs for corrosion and concrete spalling, or flaking, as part of a required structural recertification for buildings when they reach 40 years of age. Ocean salts can penetrate structures and begin rusting steel components, in particular rebar that may be improperly protected.

On Friday, the town released documents showing that two years ago an engineering consultant had found alarming evidence of “major structural damage” to the concrete slab below the pool deck and “abundant” cracking and crumbling of the columns, beams and walls of the parking garage under the 13-story building.

The consultant, Frank Morabito, did not say that the structure was at risk of collapse, but he wrote that the needed repairs would be aimed at “maintaining the structural integrity” of the building and its 136 units.

But experts said there are other factors that could make a building vulnerable to collapse. Charlie Danger, who retired as Miami-Dade County’s building chief seven years ago, said unauthorized remodeling could result in someone eliminating a structural support column.

In addition, some experts, including Mr. Aghayere, said a sinkhole or other problems with a foundation could lead to major instability under a building.

Gov. Ron DeSantis of Florida and Mayor Daniella Levine Cava of Miami-Dade County both promised on Friday that there would be a full investigation of the collapse.

“We need a definitive explanation for how this could have happened,” Mr. DeSantis said.

Federal investigators were dispatched to the scene. The National Institute of Standards and Technology, which investigated the collapse of the World Trade Center on 9/11, sent a team of experts to Florida on Friday afternoon to meet with local building officials and engineers.

The federal team will ask about the design of the building, how it may have been modified and what happened before the collapse, according to Sissy Nikolaou, an expert on geotechnical engineering who is part of the group. She said she expects the team’s first visit to last about a week.

“We have to understand the landscape of a disaster,” Dr. Nikolaou said in an interview.

Researchers using space-based radar to examine the flooding potential in the Miami Beach area had noticed long before the collapse that the Champlain Towers South building was subsiding, or on land that was sinking, in ways that neighboring properties were not.

“I was surprised,” said Shimon Wdowinski, an environmental professor at Florida International University. “I didn’t expect to see movement over there. That’s a stable part of the city.”

But Mr. Wdowinski said other areas with even larger amounts of subsidence are often seen in areas that have not had buildings collapse.

There have been other complaints from residents of the Champlain Towers condominium complex. One resident filed a lawsuit over water intrusion that she blamed on poor maintenance. Others complained that nearby construction had sent rumbles through the structure.

In the hours immediately after much of the Champlain Towers South condominiums collapsed, the authorities evacuated two nearby buildings, an 18-story condominium tower and a seven-story hotel.

But no action had been taken by Friday at the fallen building’s nearly identical sister a few hundred yards up the beach — Champlain Towers North. Both buildings went up in 1981 in Surfside, Fla., just north of Miami Beach. The complex has a third building, Champlain Towers East, erected in 1994.

The mayor of Surfside, Charles W. Burkett, said on Friday afternoon that he was worried about the stability of the north building but that he did not feel “philosophically comfortable” ordering people to evacuate.

He was speaking at a town commission meeting called to formally declare a state of emergency in Surfside, which Mr. Burkett said would give the town access to state and federal funds.

Still, Mr. Burkett said he thought the decision to evacuate should be voluntary. He added that had not yet spoken with residents in the building.

Mr. Burkett, an independent, said he had decided on this approach after talking with elected officials in Washington and in Miami.

James McGuinness, who is in charge of Surfside’s building department, told the commissioners that construction crews had been working on the roof of the south building before it collapsed, but he said he saw no evidence that the roof work had contributed to the disaster.

“There was no inordinate amount of materials on the roof that would cause this building to collapse,” Mr. McGuinness said.

Mr. McGuinness said workers had been making repairs to the roof and to anchors on the corners that hold ropes used by window cleaners.

The condominium association had hired engineers to work on a review of the structural integrity of the building and its electrical systems, he said.

Miami-Dade County requires these inspections at intervals of 40 years, Mr. McGuinness said, but the work on the anchors on the roof were not related to the recertification process.

Documents released by the town on Friday afternoon, however, showed that an engineering consultant had warned the building’s owners in 2018 about “major structural damage” to a concrete slab below a pool deck as well as crumbling and cracked concrete beams, columns and walls in a parking garage beneath the structure.

When did it happen?

Survivors said they were jolted awake at about 1:30 a.m. on Thursday by fire alarms, falling debris and the feeling of the ground trembling.

How many people have died?

At least four people were killed. The authorities fear many more fatalities.

How many are unaccounted for?

As many as 159 people were unaccounted for as of Friday evening, officials said. The authorities have stressed that the numbers might shift as the authorities figure out how many people were actually in the building.

How many have been rescued?

About 35 people were rescued from the intact part of the building, and two were pulled from the rubble, said Ray Jadallah, a Miami-Dade Fire Rescue assistant fire chief.

How tall was the building?

The tower was 13 stories tall; about half of the 136 units collapsed.

When was it built?

It was constructed in 1981, according to county property records.

How many people live in Surfside, Fla.?

The town, just north of Miami Beach, has about 5,600 residents.