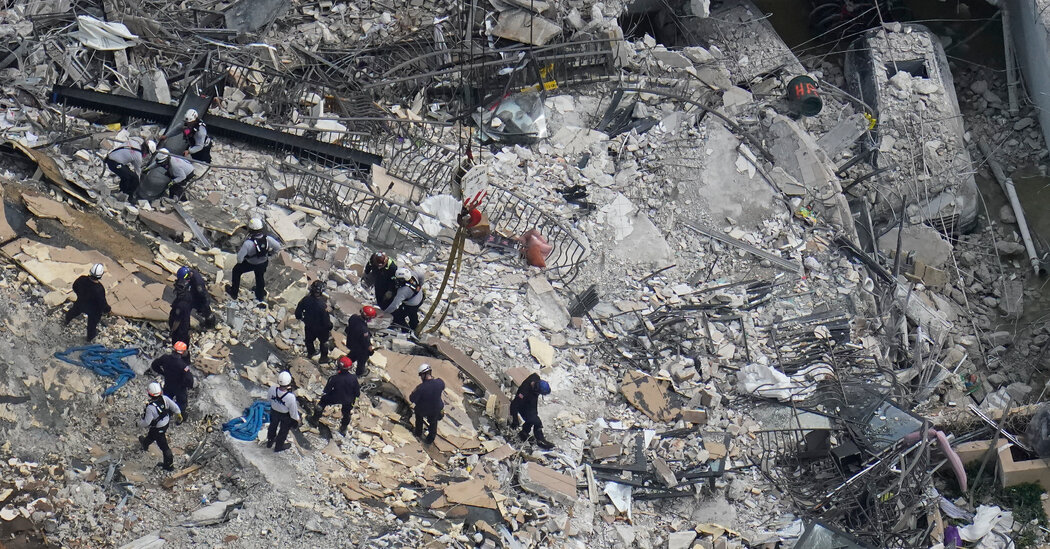 
The grim and increasingly hopeless search amid the rubble of the collapsed condominium building in Surfside, Fla., was set to continue on Tuesday after the demolition of the unstable remainder of the building over the holiday weekend.

But the approach of Tropical Storm Elsa, whose strongest effects were expected to be felt in South Florida by midmorning on Tuesday, complicated search efforts, forcing search crews to pause their efforts at some points on Monday because of lightning near the site.

Still, crews made progress, searching parts of the collapse that had been inaccessible before the demolition. They found four more bodies, bringing the confirmed death toll to 28 as darkness fell on Monday, with more than 100 still missing in the wake of the collapse of Champlain Towers South on June 24.

Mayor Daniella Levine Cava of Miami-Dade County told reporters that the demolition of the condo’s remaining portion in a controlled explosion on Sunday night was “executed exactly as planned,” after officials raced over the weekend to demolish the building as Elsa approached.

“You wouldn’t even know if you hadn’t been aware that something had just come down in the last day,” Gov. Ron DeSantis of Florida said, describing the site after the demolition.

Although emergency teams have now searched the upper layers of all of the collapse site, officials said they haven’t given up on the possibility of finding survivors. “There is hope that there are voids that will allow us to continue the search-and-rescue operation,” Ms. Levine Cava said.

Despite earlier warnings that Elsa could bring tropical storm-force winds to the Miami area, meteorologists revised their forecasts on Monday, saying that Surfside would likely be spared the worst of the storm.

By Monday evening, the sky over the search site had darkened, and tornado warnings had been issued, with forecasters predicting several inches of rain in and around Miami on Tuesday.

The heaviest winds from Tropical Storm Elsa, which was beginning to drench the Florida Keys early Tuesday, were expected to hit South Florida around midday, according to the National Weather Service. But forecasts showed the site of the condo collapse in Surfside, Fla., avoiding the worst impacts of the storm.

Still, the search for victims has been complicated by Elsa’s approach, with rescue crews forced to temporarily pause their efforts on Monday because of lightning.

Concern over the storm’s potential impact helped drive officials to demolish the half of Champlain Towers South that had remained standing on Sunday night. The search effort had been halted for much of the weekend amid growing worries about the building’s stability as the storm approached, but it resumed on Monday, with four more bodies recovered from the rubble.

Downpours and winds of up to 29 miles per hour could be felt in the Miami area on Tuesday, the Weather Service said. Gusts in the Florida Keys could be significantly stronger. The storm, which strengthened early Tuesday and could reach near hurricane strength, is expected to travel up Florida’s Gulf Coast and make landfall, likely somewhere north of Tampa, on Wednesday morning.

Elsa, which crossed Cuba on Monday, has been blamed for the deaths of at least three people in the Caribbean.

The partial collapse on June 24 of Champlain Towers South in Surfside, Fla., has plunged older beachside condos and high-rise buildings like it into a swirl of uncertainty. Local government officials and condo associations are rushing inspections, some of them long overdue. Insurance companies are demanding proof that aging buildings have been evaluated or are threatening to cut off coverage.

And real estate agents across the region are bracing for how the disaster might ripple through an otherwise scorching housing market.

“No one ever asked about a 40-year recertification before,” Ines Hegedus-Garcia, a real estate agent with Avanti Way Realty in South Florida, said of the process of assessing the structural condition of buildings constructed decades ago. “Nobody ever did that, but buyers are now asking for that.”

Cordelia Anderson, a Miami real estate agent, said five clients who had been looking at units in older condo buildings asked for hefty discounts after the collapse, or abandoned the coast altogether and instead wanted to search farther inland.

Stacie Dawn Fang, 54, was the first victim identified in the condo collapse. She was the mother of Jonah Handler, a 15-year-old boy who was pulled alive from the rubble in a dramatic rescue as he begged rescuers, “Please don’t leave me.”

Antonio Lozano, 83, and Gladys Lozano, 79, were confirmed dead by Mr. Lozano’s nephew, Phil Ferro, the chief meteorologist on WSVN Channel 7 in Miami. Mr. Ferro wrote on Instagram: “They were such beautiful people. May they rest in peace.”

Luis Andres Bermudez, 26, lived with his mother, Ana Ortiz, 46, and stepfather, Frank Kleiman, 55. Mr. Bermudez’s father confirmed his son’s death on social media, writing in Spanish: “My Luiyo. You gave me everything … I will miss you all of my life. We’ll see each other soon. I will never leave you alone.”

Manuel LaFont, 54, was a businessman who worked with Latin American companies. His former wife, Adriana LaFont, described him as “the best dad.” Mr. LaFont’s son, 10, and daughter, 13, were with Ms. LaFont when the building collapsed.

Andreas Giannitsopoulos, 21, was in South Florida visiting Mr. LaFont, a close friend of his father’s. He was studying economics at Vanderbilt University and had been a decathlon athlete at his high school. An image of him is on a mural outside the school’s athletic facility.

Leon Oliwkowicz, 80, and Christina Beatriz Elvira, 74, were from Venezuela and had recently moved to Surfside, according to Chabadinfo.com, which said they were active in the Orthodox Jewish community in greater Chicago, where one of their daughters lives.

Marcus Joseph Guara, 52, lived with his wife, Anaely Rodriguez, 42, and their two daughters, Lucia Guara, 10, and Emma Guara, 4. Mr. Guara was remembered as a kind and generous man, a godfather to twins and a fan of hard rock music.

Hilda Noriega, 92, was a longtime resident of Champlain Towers South who enjoyed traveling and whose family described her “unconditional love.” Hours before the collapse, she attended a celebration with relatives.

Michael David Altman, 50, came from Costa Rica to the United States as a child, and was an avid racquetball player as a youth. “He was a warm man. He conquered a lot of obstacles in his life and always came out on top,” his son, Nicholas, told The Miami Herald.

Also killed in the collapse were Ingrid Ainsworth, 66, and Tzvi Ainsworth, 68; Claudio Bonnefoy, 85, and Maria Obias-Bonnefoy, 69; Graciela Cattarossi, 48; Magaly Elena Delgado, 80; Bonnie Epstein, 56, and David Epstein, 58; Gonzalo Torre, 81; and the 7-year-old daughter of a Miami firefighter, whom the authorities declined to name.