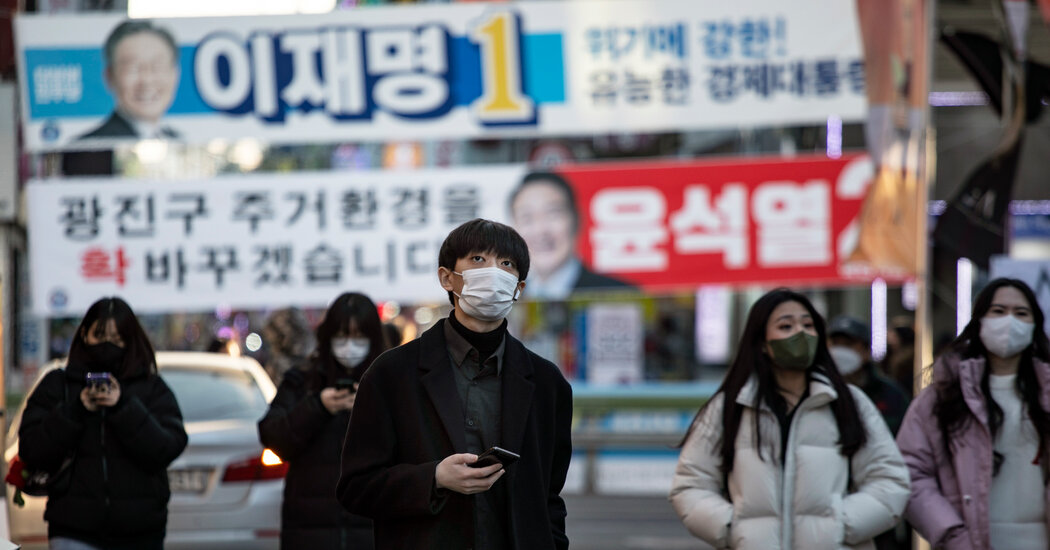 
SEOUL — When he was a college freshman in 2019, Jeong Hyun-min sometimes had less than $10 to cover meals for three days. That same year, a scandal erupted in South Korea that still roils him today.

While Mr. Jeong was cleaning tables and serving drinks at beer halls just to make ends meet, the country’s justice minister and his wife were accused of pulling strings to help their daughter glide into medical school, even fabricating an award certificate.

“I realized what people had been saying all along: Your chances in this country are determined by what kind of parents you have,” said Mr. Jeong, a political science major at Daejeon University. “Fairness is the key if politicians want our trust back.”

On Wednesday, South Koreans will elect a new president and all eyes are on young people, whose disillusionment with the government has made this one of the most tightly fought races in recent memory. ​

Frustrated over sky-high housing prices, a lack of job opportunities and a widening income gap, young people who were once considered reliably progressive voters are now seen as undecided and will most likely tip the balance in the election.

Unlike previous generations, these voters are not easily swayed by old political dynamics, such as regional allegiance, loyalty to political bosses, fear of North Korea or a desire to ease tension on the Korean Peninsula. Instead, they talk of economic despair​ and general frustration as their primary concerns, themes captured in popular movies and TV dramas like “Parasite” and “Squid Game.”

Many have adopted a saying: “isaenggeul,” or “We can’t make it in this life.”

“In the past, young South Koreans tended to vote progressive, but now they have become swing voters,” said Prof. Kim Hyung-joon, an election expert at Myongji University in Seoul. “To them, nothing matters as much as fairness and equal opportunity and which candidate ​will ​provide it.”

Yoon Suk-yeol, the leading candidate from the opposition People Power Party, has won over voters in their 60s and older by pitching their preferred conservative agenda. He has championed a stronger alliance with the United States and even threatened “pre-emptive strikes” against North Korea.

Mr. Yoon’s rival, Lee Jae-myung, the candidate representing President Moon Jae-in’s Democratic Party, remains popular among voters in their 40s and 50s. He has called for a diplomatic balance between the United States, South Korea’s security ally, and China, its biggest trading partner.

Few of these issues have roused South Koreans in their 20s and 30s, who make up one-third of the eligible voters, as much as they did older voters. Rather, on top of their minds is an uncertain economic future.

“We will be the first generation whose standard of living will be lower than our parents’,” said Kim Dong-min, 24, a student at Konkuk University Law School.

In the decades following the 1950-53 Korean War, most South Koreans were ​equally ​poor. Those who found success were often referred to as “a dragon rising from a humble ditch.”

Middle-class dreams were plausible as the postwar economy roared, churning out jobs. Education functioned as a vehicle of upward mobility. Millions of people migrated to the Seoul metropolitan area, where the best schools and most of the country’s wealth was eventually concentrated.

Getting a degree from an elite university and owning an apartment in Seoul became symbols of social mobility. But in recent decades, the economy slowed, and that old formula has broken down. In a survey last year, nearly 65 percent of the respondents in South Korea said they were skeptical that their children’s economic future would be better than their own.

A majority of ​respondents in their 20s and 30s said they no longer saw education as the great equalizer, as admission into top universities depended largely on whether parents could bankroll expensive private tutors.

“How would you feel when you are struggling in a marathon and you see others cruising along in sports cars?” said Oh Byeong-ju, 23, a senior at Dongguk University in Seoul.

In South Korea, where nearly three-quarters of household wealth is concentrated in real estate, no index illustrates widening inequality quite ​like housing prices. Young couples whose wealthy parents helped them buy apartments — a tradition in South Korea — saw their property value in Seoul nearly double under Mr. Moon.

The average household, on the other hand, must save its entire income for 18.5 years in order to ​afford an apartment in the city, according to estimates by KB Kookmin Bank.

“It has become impossible to buy an apartment in Seoul, even if you work and save for your entire life,” said Park Eun-hye, 27, who works at Youth Mungan, a civic group that provides affordable meals for poor youths. “Whatever the candidates say sounds unconvincing. Young people instead invest what little money ​we save in stocks and cryptocurrencies.”

South Korea’s poverty rate and its income inequality are among the worst in wealthy countries, with youths facing some of the steepest challenges. Nearly one in every five South Koreans between the ages of 15 and 29 was effectively jobless as of January, according to government data. That is far higher than the national average, 13.1 percent.

Upon his inauguration, Mr. Moon promised “equal opportunities” for everyone. “The process will be fair,” he said. “And the result will be righteous.”

Many young people claim fairness and equal opportunity — or their versions of those values — have been eroded instead. They bristled when Mr. Moon’s government formed a joint ice hockey team with North Korea for the 2018 Winter Olympics, arguing that it was unfair to replace elite South Korean athletes with inferior North Korean players.

And last year, after a scandal revealed officials had used their position to seek personal gain in the housing market, young voters helped deliver Mr. Moon’s government a crushing defeat in the Seoul mayoral election.

Rival political parties have since rushed to appease South Korean youth. Lawmakers lowered the minimum voting age to 18 from 19 and the age limit for running for Parliament to 18 from 25. Mr. Lee and Mr. Yoon, the two leading presidential candidates, have both apologized and have applied different tactics to win votes.

Mr. Yoon’s popularity soared among men in their 20s after he promised to abolish the Ministry of Gender Equality and Women and sidelined a campaign adviser who identified as a feminist. Anti-feminist sentiments are widespread among the young men.

Mr. Lee is more popular among women in their 20s, and he has promised to introduce harsher punishment for date rape and other sex crimes. He also campaigned to make companies reveal gender-wage gaps to their employees and to the public.

But 20 percent to 30 percent of South Koreans in their 20s and 30s have said they may change their mind about their preferred candidate before they vote this week, according to surveys. “Our support shifts from one political party to another, issue by issue,” Mr. Jeong said.