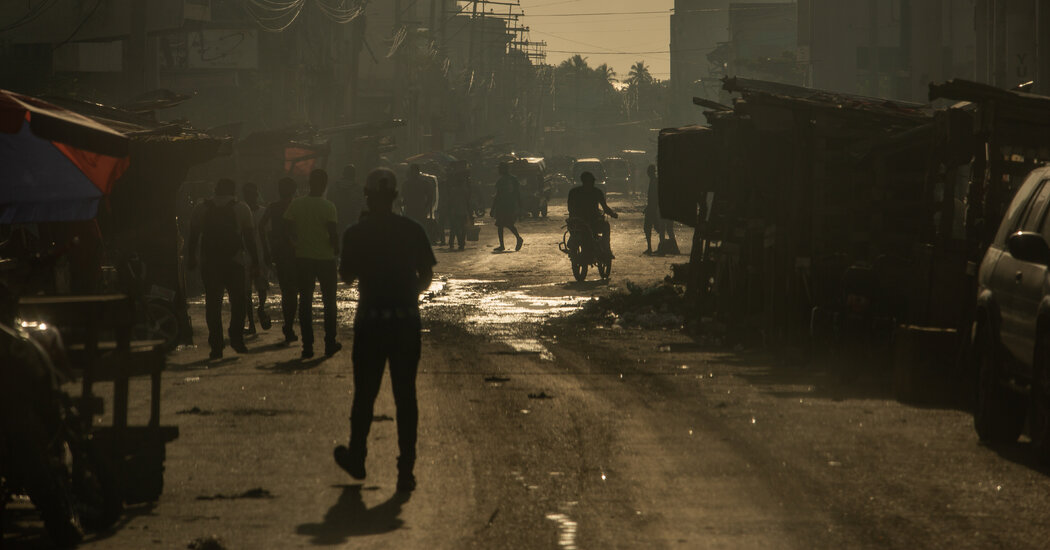 As many as 17 Christian missionaries from the United States and their family members, including children, were kidnapped on Saturday by a gang in Port-au-Prince as they were leaving an orphanage, according to Haitian security officials.

Details of the kidnapping remained unclear, but local officials said the missionaries were abducted from a bus headed to the airport to drop off some members of the group before continuing to another destination in Haiti.

Haiti has been in a state of political upheaval for years, and kidnappings of the rich and poor alike are alarmingly common. But even in a country accustomed to widespread lawlessness, the abduction of such a large group of Americans shocked officials for its brazenness.

Violence is surging across the capital, Port-au-Prince. By some estimates, gangs now control roughly half of the city. On Monday, gangs shot at a school bus in Port-au-Prince, injuring at least five people, including students, while another public bus was hijacked by a gang as well.

Security has broken down as the country’s politics have disintegrated. Demonstrators furious at widespread corruption demanded the ouster of President Jovenel Moïse two years ago, effectively paralyzing the country. The standoff prevented the sick from getting treatment in hospitals, children from attending school, workers from going to the rare jobs available and even stopped electricity from flowing in parts of the country.

Since then, gangs have become only more assertive. They operate at will, kidnapping children on their way to school and pastors in the middle of delivering their services.

The nation’s political turmoil intensified further after Mr. Moïse was assassinated in his home in July, a killing that remains unsolved. The few remaining officials in the country soon began fighting for control of the government, and the factionalism has continued for months, with officials accusing one another of taking part in the conspiracy to kill the president.

The kidnapping of the American missionaries happened only a day after the United Nations Security Council extended its mission in Haiti by nine months in a unanimous vote on Friday. Many Haitians have been calling for the United States to send troops to stabilize the situation, but the Biden administration has been reluctant to commit boots on the ground.

A State Department spokesman had no comment on the abductions in Haiti on Saturday night.

Parts of the Haitian capital, including where the kidnappings occurred, are so dangerous that many residents have fled, leaving once-bustling streets nearly abandoned. Many of the streets have been surrendered to the gangs, with few pedestrians venturing out even during the day.

Gangs have kidnapped even poor street vendors, and when they find little to nothing in their wallets, gang members sometimes demand that they sell off items in their homes, like radios and refrigerators. Earlier this year, a classroom of students got together to raise money to pay the ransom of a fellow student.

Haiti has been rocked by one crisis after another this year.

First came mass protests that paralyzed much of the capital early this year. Haitians, angry that President Jovenel Moïse was refusing to step down, took to the streets demanding change amid daily power cuts, food shortages and corruption.

In July, mercenaries stormed his home in the middle of the night, killing him and injuring his wife. The assassination left a political void that deepened the turmoil and violence that had gripped Haiti for months, threatening to tip one of the world’s most troubled nations further into lawlessness.

Long accustomed to unrest, the Haitian population has found its resilience pushed to the limit. Barely a month after the assassination, a huge earthquake struck the nation. The 7.2-magnitude quake brought back memories of the tremor that devastated the nation in 2010 and killed more than 100,000 people. Haiti has yet to recover from that, or a subsequent outbreak of cholera brought by United Nations peacekeepers.

The chaotic and violent year has led to a surge in kidnappings, adding even more fear to daily life.

Armed gangs have taken greater control of the streets, terrorizing poor neighborhoods and sending thousands fleeing, kidnapping even schoolchildren and church pastors in the middle of their services. Poverty and hunger are rising, with many citizens accusing members of the government of enriching themselves while depriving the population of even the most basic services.

The crises have fueled immigration to South America and even the United States, where Haitians seeking asylum have come to the southern border.

Christian churches play a central role in Haitian life. For many Haitians, their only source of aid throughout their lives, in the absence of strong government institutions, has been the church, a part of Haiti’s landscape since the era of European colonialism and slavery.

Severe poverty, systematic gang violence, the pandemic and a history of dysfunctional government have only worsened the struggles of Haiti’s 11 million people.

Those struggles have reinforced the importance of the church as a source of aid, education and stability for much of the country, which has no other social safety net. French slave owners made Catholicism Haiti’s official religion, and it endured even after the slave revolt and Haitian independence, a faith many Haitians are deeply bound to.

But Haiti, as the world’s first Black independent nation, took Catholic rituals and melded them with local customs, creating a faith unique to the nation that many find pride in.

Churches became a major feature of communities across the country, places to gather, seek refuge and get food and education. These needs only intensified as the country — once the wealthiest in the Caribbean — slipped into poverty over the past 100 years. Foreign interference from the United States, which invaded and supported political coups and dictatorships, deepened the despair.

Religious charities played a prominent role in mobilizing help for victims of a devastating earthquake this year. Catholic Relief Services, for example, dispatched teams to Les Cayes, Haiti, and the surrounding area to provide clean water, sanitation, shelter and emergency supplies. Catholic Charities of the Archdiocese of Miami, a major community of the Haitian diaspora, accepted donations for quake relief.

Kidnapping has long been a scourge in Haiti, with gangs abducting anyone from vegetable sellers to foreign businesspeople for ransoms that range from the hundreds to tens of thousands of dollars.

The threat of kidnapping has grown as political turmoil continues and armed gangs have taken greater control of the streets, terrorizing poor neighborhoods and sending thousands fleeing.

Haitians — already facing poverty and hunger — have described the threat of kidnapping as a constant menace that complicates much of daily life, with simple acts like buying gas or going to the grocery store carrying the risk of being grabbed.

“They can kidnap you at any time; they don’t need to know who you are to kidnap you,” said Anette Telemarque, 72, a Haitian who is now living in New York. “They kidnap everybody, rich or poor.”

She added: “I was suffering in Haiti because I didn’t have a minimum of freedom. Every time I had to go out, I thought about the kidnapping, the gangs in the streets.”

Most victims are middle and working class people. Their families often end up negotiating with kidnappers on their own rather than turn to the police, who have a long history of corruption and who sometimes engage in kidnapping themselves.

“For some time now, we have been witnessing the descent into hell of Haitian society,” Archbishop Max Leroy Mesidor of Port-au-Prince said in a statement at the time.

Haitians have been making the dangerous journey to the southern border of the United States in greater numbers this year after the country was buffeted by a string of crises, including an earthquake, a presidential assassination, floods and gang violence.

In September, thousands of Haitians gathered at a makeshift camp in a Texas border town, which led to scenes of Border Patrol agents on horses pushing some of them back across the Rio Grande. That prompted criticism from Democrats and questions about President Biden’s decision to deport Haitians who arrived at the border.

Haitian government officials have protested that they do not have the resources to help those who are being sent back on flights from the United States. Daniel Foote, the senior American envoy for Haiti policy, resigned over a deportation policy he called “inhumane” and “counterproductive.”

Over the past decade, many Haitians have sought refuge abroad, particularly after a devastating earthquake in 2010. Some who traveled to countries in South America, including Brazil and Chile, decided to continue on to the United States this year. Some said they believed that migration policies had eased after President Donald J. Trump left office, particularly after Mr. Biden extended protections for Haitians already in the country.

But for those who reached Del Rio, the Texas border town where thousands gathered, it became clear that their expectations of a warm welcome were mistaken.

Still, many continue to make a perilous journey, crossing the lawless Darién Gap, a roadless stretch of jungle that links South America to the North. Panamanian officials say an estimated 95,000 migrants, most of them from Haiti, tried to cross that dangerous stretch in the first nine months of this year.

“We take this risk because we have children,” Vladimy Damier, a Haitian migrant who was crossing the Darién Gap with his family, told The New York Times.

Over the past decade the international community has sent more than $13 billion in aid to Haiti.

In the absence of a strong government, religious groups and international aid organizations provide vital services in the country, which has been called the Republic of NGOs because of the many nongovernmental organizations that operate there.

The devastating 2010 earthquake was a catalyst for some charity groups, which have allowed Haiti to greatly improve its capacities to respond to health and natural disasters.

Over the past decade, emergency medical services have been established and training programs for emergency responses have been opened. Air ambulances are now available as are medical helicopters and trains.

“The things we had at our disposal in 2010 versus now are night and day,” Dr. Paul Farmer, a physician and co-founder of the relief agency Partners in Health, said in an interview in August. “We can move patients from south to north like today, whereas after the earthquake in 2010, we really had to wait eight days to transport people by air to an operating room,” he added.

But the charities have also fostered an unhealthy dependence, some expert say. And even the best intentions have sometimes taken a wrong turn.

After the earthquake in 2010 killed more than 200,000 in Haiti, the United States led a mass international adoption effort that saw many safeguards dropped to speed the evacuation of children. Some were sent to the United States without adequate paperwork or screening to make sure they weren’t improperly taken from relatives. An unknown number were left in the American foster care system because adoptive families had not been formally arranged or backed out.

The aid effort in response to the earthquake also brought other problems. A group of United Nations peacekeepers sent to Haiti in the aftermath brought cholera with them, and the outbreak that followed has killed as many as 10,000 people since then. The United Nations only acknowledged its role in the outbreak nearly six years later, and faced criticism for its unwillingness to hold itself accountable.