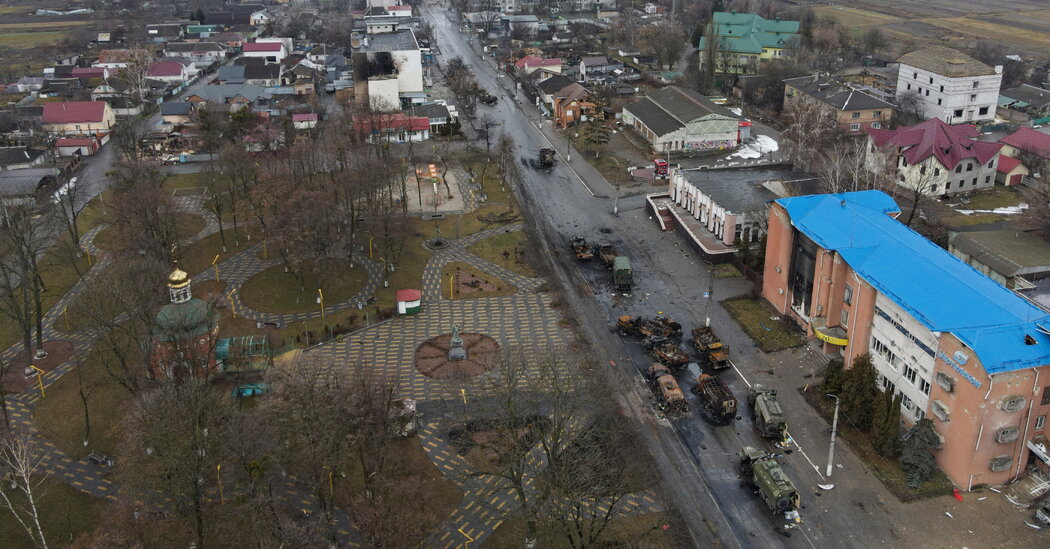 LVIV, Ukraine — One week into their invasion of Ukraine, Russian forces are ramping up assaults on civilian areas, making strategic advances in the coastal south and beginning to lay siege to major cities.

In the days since, parts of towns and cities along Ukraine’s eastern border with Russia have been reduced to rubble by Russian forces, according video evidence verified by The New York Times and interviews with residents who fled. Major cities, including the capital, Kyiv, have faced significant onslaughts, with Ukrainian officials saying Russian forces had taken control of the first major city in the war, the strategic southern port of Kherson.

As the war moves to an increasingly brutal phase, Russian artillery and rocket fire have cut off electricity, water and heat to many communities. Reports are also multiplying of Russian strikes against hospitals, schools, apartment complexes and critical civilian infrastructure. And a humanitarian crisis looms: More than a million people have already fled the country, according to the head of the United Nations refugee agency.

Even as Russian forces continue their onslaught, soldiers and civilian warriors from Ukraine, a country of 44 million, are fiercely resisting the attack of its much larger and more heavily armed neighbor.

Russia has been making huge gains across the country, especially in the south, but it has yet to gain air superiority over Ukraine, a strategic setback for Mr. Putin that analysts attribute to Ukraine’s fighter jets and surprisingly resilient air defenses. Officials from Ukraine and the United States also say that a number of Russian units — which reportedly include many young, poorly trained conscripts — have been hampered a bit by delays, poor morale and shortages of food and fuel.

President Volodymyr Zelensky of Ukraine vowed on Thursday to regain control of parts of the country where Russian forces had made gains.

“I am sure of this: if they entered somewhere, it is only temporarily,” he said in an address to the nation. “We’ll drive them out. With shame.”

Here’s how the war is evolving:

After facing stiffer than expected resistance, Mr. Putin has escalated the bombardment of Kyiv as his forces seek to topple the government. As many as 15,000 people, mostly women and children, have taken up residence in the subway system, The Times’s Andrew Kramer reported from Kyiv.

This week, a missile hit a television tower in Kyiv, and airstrikes hit a residential area of Zhytomyr, a city less than 100 miles west of Kyiv. A video verified by The New York Times also showed what appeared to be two Russian warplanes flying at low altitude moments before an airstrike hit a residential apartment complex in Irpin, a city on Kyiv’s northwestern limits.

Such attacks, along with a convoy roughly 40 miles long of Russian military vehicles that has been moving toward Kyiv in recent days, have stirred fears that troops may encircle and bombard what just a week ago was a peaceful, modern European capital of about 2.8 million people. But on Thursday, there were indications that the convoy may be struggling with soggy ground and other logistical issues slowing its advance.

Mr. Putin’s forces have already surrounded the northeastern city of Kharkiv, 20 miles from the Russian border, and have been pummeling it from the outside with missiles and artillery shells.

Taking Kharkiv, Ukraine’s second-largest city, would be a major strategic prize and could allow Russia to consolidate its forces in other areas. But holding a city requires significant troop presence, and Russia is already facing a rebellion of the general public. It is unclear what Russian forces plan to do should they gain control of government buildings — or how they would deal with what would probably be an insurgent effort to oust them.

What’s clear for now is that laying siege to Kharkiv will most likely inflict heavy collateral damage on civilians as the war grinds on. There are already reports of men, women and children in Kharkiv going days without food and water, huddled in freezing basement shelters as Russian forces continue to bombard a city that just a week ago had a population of 1.5 million.

Russia is also mounting increasingly brazen attacks on Kharkiv’s downtown infrastructure, a strategy intended to make the civilian population flee as part of a precursor to a ground invasion. Missiles have been hitting administrative buildings, and there have been clashes with Russian forces as they probe and test the city’s defenses.

Russia has made important strategic gains in recent days across southern Ukraine’s Black Sea coast. Securing the south would cut off the Ukrainian government’s access to vital ports and could allow Russia to bring troops and supplies in by sea.

From the southern coast, Russian troops could move northward toward Kyiv and link up with fellow Russians who have been fighting in eastern Ukraine. That would expand Mr. Putin’s control east of the Dnieper River, which cuts through the center of Ukraine and divides its western and eastern regions.

Odessa, Ukraine’s biggest port city, is not as militarily significant as the nearby Crimean Peninsula, which Russia annexed in 2014. But seizing it would be essential if Russia wants to control southern Ukraine, The Times’s Michael Schwirtz reported from Odessa on Wednesday.

Now that Russian forces have moved into the southern port of Kherson, they have a path to Odessa. They have also surrounded another key port city, Mariupol. If Mariupol falls, two flanks of Russian and Russian-backed fighters would be able to trap Ukraine’s forces in the southeast.

Russian naval ships have gathered just outside Ukraine’s territorial waters in the Black Sea. Ukraine has accused Russia of firing on civilian ships and using them as cover.

In western Ukraine, people have sought refuge from the invasion in Lviv, a city of ornate buildings about 45 miles from the Polish border that has so far been spared heavy combat.

But since the first air raid siren wailed a week ago, there has been a growing sense of urgency and anxiety in Lviv.

A vast network of volunteers has emerged to help both those fleeing conflict and others heading off to the front. The roads into the city have also been lined with checkpoints and hastily erected defenses.

Heavily armed soldiers patrol the streets, stopping strangers and apprehending people they contend are Russian agents and saboteurs. In one incident that a New York Times reporter witnessed in Lviv on Tuesday, several men were pulled out of a red sedan in the heart of the old town and bundled away by security.

In restaurants that remain open, bottled water is now served exclusively in plastic bottles. The glass ones are being used to make Molotov cocktails.