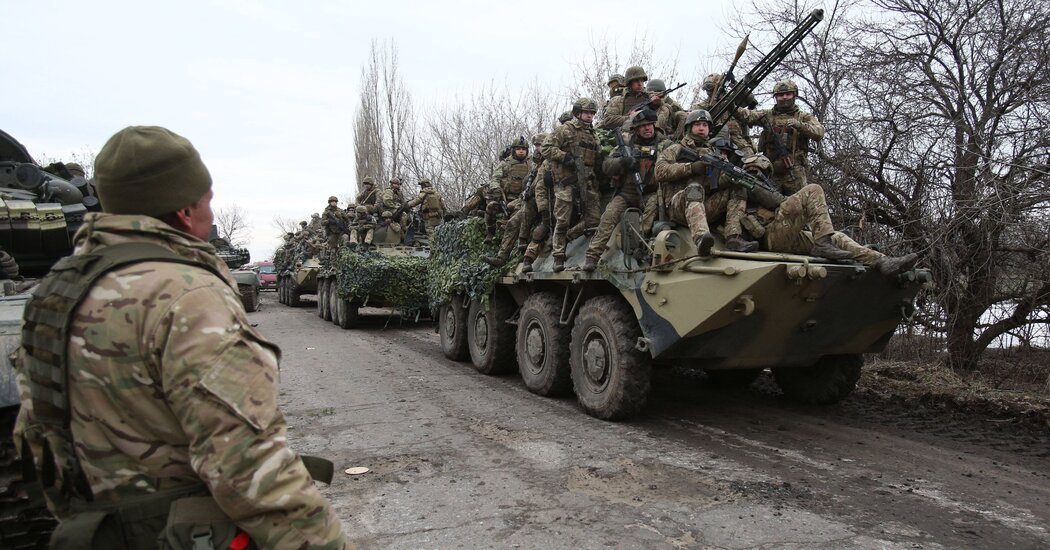 KYIV, Ukraine — Dozens of Ukrainian military personnel were killed in the early hours of Russia’s multipronged assault on the country, officials said on Thursday, as its overmatched army strained to mount an “all-out defense” against Russian forces advancing by land, sea and air.

More than 40 Ukrainian soldiers were killed and dozens were wounded in fighting on Thursday morning, said Oleksiy Arestovich, an adviser to President Volodymyr Zelensky of Ukraine.

At least 18 military officials were killed in an attack outside the Black Sea port city of Odessa, where amphibious commandos from the Russian Navy came ashore, according to Sergey Nazarov, an aide to Odessa’s mayor.

Explosions rang out around Odessa at about 10:30 a.m., sending firefighters scurrying to put out blazes and rescue people in the vicinity, according to the city’s emergency services agency. By noon, however, the fighting in Odessa appeared to have subsided, and there was no indication of any Russian forces in the city, said Mr. Nazarov.

The country’s foreign minister, Dmytro Kuleba, said that Ukraine was facing “a full-scale attack from multiple directions” but that it “continues to defend itself” from the Russian advance. Civilians lined up at recruitment offices to take up arms against President Vladimir V. Putin’s forces.

Starting before dawn, Russian forces crossed into Ukraine at multiple points, with helicopter-borne troops flying in under the cover of machine-gun fire, naval units coming ashore from the Black Sea and military vehicles crossing from Crimea, the peninsula that Russia seized in 2014.

Ukrainian forces said they had shot down several Russian fighter aircraft and a helicopter in an increasingly intense battle to maintain control over key cities. Ukrainian troops had also repelled Russian advances on two major cities: Chernihiv in the north, near the Belarus border, and Kharkiv in the northeast, close to Russia, a senior Ukrainian military official said.

Video footage verified by The Times showed at least half a dozen Russian helicopters flying west over the Dnieper river toward Hostomel, a town on the outskirts of the Ukrainian capital, Kyiv, with some helicopters apparently attacking Hostomel’s airport. One video released by Ukraine’s armed forces appeared to show at least one of those helicopters being shot down.

Other videos posted to social media showed Russian military vehicles parked on the outskirts of Kharkiv, the second largest city, where troops had set up checkpoints on a main road.

The Ukrainian army is badly outgunned and outmanned by Russian forces, but in one indication that it was mounting a resistance, two Russian armored personnel carriers were seen damaged, one crashed into a tree, in the eastern Ukrainian town of Shchastya early Thursday.

Maryna Danyliuk, a retiree, was awaken by intense explosions — she believed them to be caused by Russian artillery fire — around 5 a.m. She hastily packed to flee.

By the time she was driving, she said in a telephone interview, she could hear sounds of combat on the town’s street, and saw the two apparently damaged armored vehicles. They had no markings other than a white circle surrounding the letter Z, a symbol that has been seen on Russian military vehicles in recent days on the Russian side of the border.

It was unclear what had happened to the vehicle crews, she said: “We were driving very fast. There was shooting in the city.”

In Kramatorsk, in eastern Ukraine, about 100 men, ranging in age from their 20s to 50s, turned up at a military recruitment office even as the dull thuds of explosions could be heard from the direction of the town’s military airport.

They packed into a corridor and filled out forms to join the military, heeding a call from Ukraine’s defense minister, Oleksiy Reznikov, who asked all able citizens to immediately enlist with the country’s territorial defense units.

“The enemy is attacking, but our army is indestructible,” he said. “Ukraine is moving into all-out defense mode.”