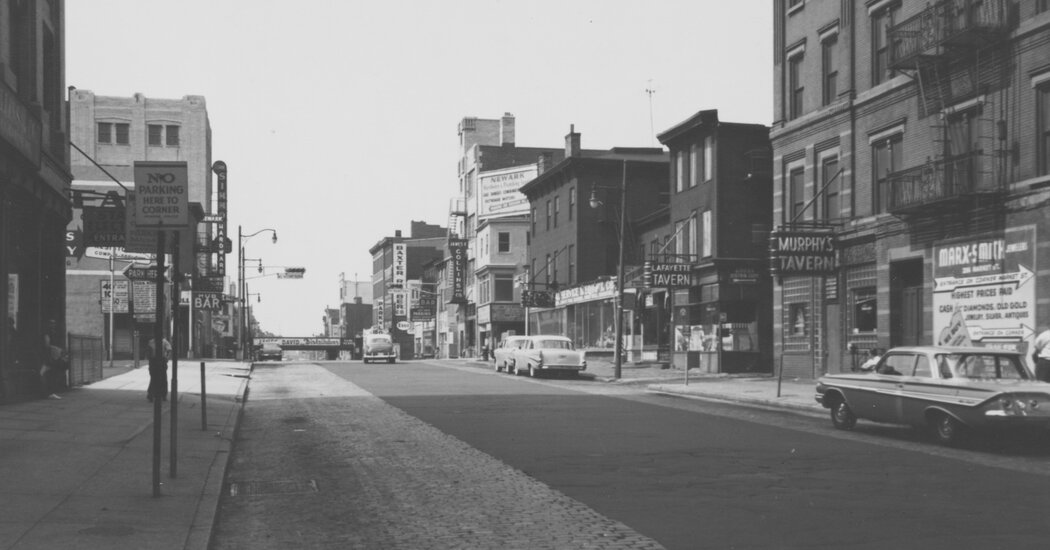 
One tavern in Newark was shut down for a month in 1939 after a man “made up with rouge, lipstick, mascara and fingernail polish” asked for a drink in a “very effeminate voice,” records show.

In Paterson, N.J., a saloon owner lost her liquor license in 1955 after investigators spotted 15 male couples dancing and sitting with “heads close together, caressing and giggling.”

And in 1956 in Asbury Park, which was then, as it is today, a hub of gay life on the Jersey Shore, a bar was cited for serving men who “rocked and swayed their posteriors in a maidenly fashion.”

From the end of Prohibition in 1933 through 1967, when a State Supreme Court ruling finally outlawed the practice, New Jersey, like many other states, wielded its liquor laws like bludgeons to shutter gay bars.

On Tuesday, New Jersey will acknowledge that painful history for the first time.

A trove of records unearthed by the Division of Alcoholic Beverage Control is being released publicly online, providing a wrenching historical look into policies that spanned four decades. And New Jersey’s attorney general, Gurbir S. Grewal, the state’s top law enforcement officer, is expected to offer a formal apology for the decades-old enforcement actions.

“For 35 — probably more — years, this had a chilling effect on bars letting in gay patrons,” Mr. Grewal said. “It was really just revolting.”

“The public,” he added, “needed to know that we hold ourselves accountable for our own failings.”

New Jersey’s decision to grapple with its past mistreatment of L.G.B.T.Q. residents follows other moments of reckoning over the abuse of a population that was routinely and unfairly singled out by the authorities.

Two years ago, the commissioner of the New York Police Department apologized for a violent 1969 raid on the Stonewall Inn, a clash that galvanized the gay rights movement. The apology was considered momentous, if overdue.

But Mr. Grewal’s acknowledgment of systemic discrimination that dates to an era well before the modern gay rights movement was seen as groundbreaking by historians and gay rights organizations.

“The targeting of gay bars was a particularly insidious thing because it was for gay people the only place they could be themselves,” he added. “It took away the one safe place people had.”

The practice of penalizing taverns for serving gay patrons, who at the time were mainly men, was widespread across the country during the early to mid-20th century, when gay sex was itself a crime, said George Chauncey, a history professor at Columbia University and the author of “Gay New York.”

By the late 1950s, courts in New York and California had issued rulings barring the practice. Yet it was still common for saloons and taverns to refuse service to gay patrons, who were seen as inherently disorderly, leading to a “sip in” protest in 1966 at Julius’ in the West Village of Manhattan, one of the country’s oldest operating gay bars.

In addition to apologizing and releasing the agency records, New Jersey will also symbolically vacate the penalties against the bars, none of which are believed to still be in business. Inspectors at the state’s alcoholic beverage control division will also now be required to participate in training to safeguard against implicit bias.

And a plaque is expected to be installed Tuesday, timed to coincide with Pride Month, near the site of what was once the Paddock Bar in Asbury Park, which advertised itself as “the gayest spot in town” and was closed after a series of raids.

“This part of our community’s history is important to tell,” said Christian Fuscarino, executive director of Garden State Equality, the state’s largest gay rights group. “It wasn’t centuries ago that L.G.B.T.Q. people were persecuted for loving openly. It was recent history that is important to know as we push equality forward.”

Two years ago, to mark the 50th anniversary of the Stonewall uprising, Thomas H. Prol, the first openly gay president of New Jersey’s bar association, began researching the practice for a scholarly article. Garden State Equality eventually brought the information to the attorney general’s office, which asked its alcoholic beverage division to determine how widespread the practice was.

What the agency found surprised even Mr. Grewal, who said he decided to offer a public apology to “make sure that our actions reflect our values.”

“We have to really shine a light on this ugly history,” he said.

Bill Singer, a New Jersey lawyer and gay rights activist who became known as the “angel of death” for writing deathbed wills for men dying of AIDS, said the attorney general’s action was laudable — but incomplete.

Mr. Singer said any true reckoning should also include expunging criminal records of same-sex couples arrested on charges of lewd behavior while cruising in parks and other public areas in the 1970s and 1980s.

Carol Torre began operating bars and a hotel popular with lesbians in Asbury Park about a decade after New Jersey’s courts abolished the liquor laws that targeted gay patrons. She said the hurdles she faced eventually had more to do with the sometimes corrupt back-room city politics than an overt bias against homosexuality.

“I went, in my book, from an extreme lesbian to just a pain-in-the-neck person,” Ms. Torre said about her fights with City Hall. “I thought that was an accomplishment.”

“It kind of became like a family,” Ms. Torre said.

That made the slurs and disdainful references to gay patrons, discovered over the last two months in state records, even more revolting, said James B. Graziano, the director of the state’s alcoholic beverage control division.

The enforcement records, known as bulletins and originally published in “musty old books,” were digitized two years ago, he said. Still, it took weeks to pore through the electronic records using keywords.

Ray Lamboy, an assistant attorney general at the A.B.C., and his team eventually unearthed 126 actions against 104 bars. The penalties included shutdowns ranging from five to 240 days; 10 bars lost liquor licenses altogether, and were closed.

And that may be just the tip of the iceberg.

An unknown number of bars were likely targeted but shielded from enforcement because of ties to organized-crime factions prevalent in the middle and late 1900s.

“The inhumanity and the vitriol in the language was striking, to say the least,” Mr. Graziano said. “It’s important to have this historical record, so we can do better.”