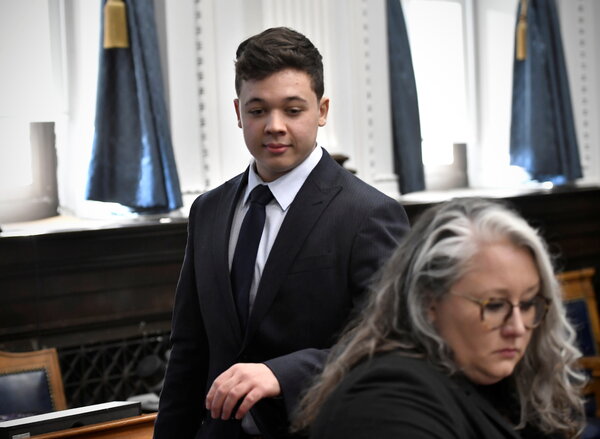 Kyle Rittenhouse is standing trial for the shootings of three men — two of whom died — in the immediate aftermath of demonstrations in Kenosha, Wis., on Aug. 25, 2020.

The demonstrations erupted after a Kenosha police officer had shot and wounded a Black man, Jacob Blake. The episode, captured on cellphone video, came at a time of protests across the country over the killing of George Floyd and police abuse of Black Americans.

Kenosha experienced widespread looting, arson and property destruction in the days after Mr. Blake was shot. The shootings by Mr. Rittenhouse, which he contends were committed in self-defense, occurred on the third night of protests in the city.

The homicide charges, equivalent to what other states call murder charges, carry a maximum sentence of life in prison.

Mr. Rittenhouse, now 18, was 17 when the shooting took place. He lived with his mother in Antioch, Ill., just over the border from Wisconsin. His father lived in Kenosha.

Mr. Rittenhouse had worked for a time as a lifeguard in Kenosha County, and kept a military-style semiautomatic rifle in Wisconsin, which the authorities said had been purchased for him by a friend.

Long before the shooting, Mr. Rittenhouse’s social media accounts were full of posts supporting the police and Blue Lives Matter. He had been a cadet in a program for young aspiring police officers.

Those who were shot

The trial judge has reiterated a longstanding rule that, because the question of self-defense is at issue in the trial, the people who were shot cannot be referred to as “victims” in his courtroom.

On the evening of Aug. 25, demonstrators filled Civic Center Park in downtown Kenosha, across from a barricaded courthouse defended by police officers and National Guard troops. Also present were people dressed in camouflage and carrying rifles with ammunition strapped to their chests — legal for adults in Wisconsin, an open-carry state.

Some protesters threw fireworks and water bottles at police officers, who responded with tear gas and rubber bullets. The crowd was eventually driven out of Civic Center Park and down Sheridan Road, a main thoroughfare. By late evening, most protesters had left the area, but some remained on Sheridan Road, occasionally scuffling and arguing with several dozen people who said they were there to defend the city.

Video taken that night showed that Mr. Rittenhouse, who had joined a group of armed people who said they were there to protect businesses, was milling around on Sheridan Road and offering medical assistance to protesters. Shortly before midnight, he was chased into the parking lot of a car dealership by Mr. Rosenbaum, who had joined the crowd downtown.

Mr. Rittenhouse then fled down Sheridan Road with at least a dozen members of the crowd in pursuit. One could be heard yelling, “That’s the shooter!”

Moments later, Mr. Rittenhouse tripped and fell, and then fired at two more people who were pursuing him, Mr. Huber and Mr. Grosskreutz.

As police vehicles arrived, Mr. Rittenhouse walked toward them with his arms raised, but they drove past him, trying to reach the people who had been shot.