Home  /  News   /  Kevin Durant Can Score From Anywhere. Defenses Don’t Know What to Do. 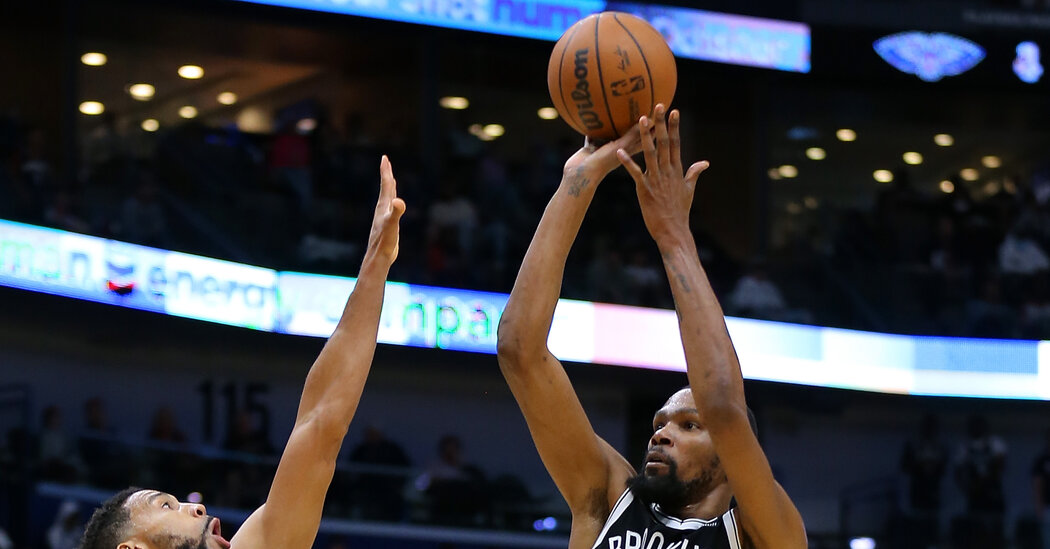 Kevin Durant Can Score From Anywhere. Defenses Don’t Know What to Do.


Watching Kevin Durant play offense is a little bit like spending summers in the South. You know what to expect and you prepare for it, but you still find yourself saying to others, “Man, can you believe this heat?”

Even the most casual N.B.A. fan knows that Durant is one of the best offensive players ever to take the floor. But this year, Durant is managing to outdo himself. Through 14 games, heading into Tuesday’s matchup with Golden State, Durant was on pace for one of the best seasons of his career. He had carried the Nets to a 10-4 record, despite not having Kyrie Irving as a playmaker next to him, and with James Harden off to a slower-than-expected start. Durant is making a serious run at a second Most Valuable Player Award.

He is averaging 29.6 points a game to lead the N.B.A. — and doing so at what would be a career-best 58.6 percent field-goal percentage. Durant’s true shooting percentage — a measure of offensive efficiency that includes free throws and 3-point shooting — is .682, putting him among the league leaders.

But beneath the hood, there is another eye-popping stat that makes this season different: Durant’s midrange game is humming at a ridiculous level unseen before from him.

While midrange shots have generally fallen out of vogue in the N.B.A. over the last decade, Durant has long made them a calling card. The midrange is generally defined as the area outside of the free-throw lane but inside the 3-point line, which is a little less than 24 feet away from the basket and closer in the corners.

Durant is shooting a whopping 70.3 percent between 16 feet away from the basket and the 3-point line. To put that in perspective, he has shot better than 50 percent from that range over a whole season just twice in his past 13 active seasons. About a fifth of his shots typically come from this distance, with another fifth coming from 10 to 16 feet away (some of these could have come from inside the free-throw lane).

Teams have mostly gone away from creating offense in that area because modern analytics calculate the most efficient shots to be those at the basket or outside the 3-point line. But when you shoot as well as Durant does, those guidelines don’t apply to you. Occupying that in-between space on the court is a crucial part of Durant’s game — so much so that his typical warm-up routine features meticulous repetition of midrange shots.

Durant’s most unstoppable weapon is the pull-up jumper, and given his height of 6-foot-10, it’s what allows him to be so dangerous from this range. Opposing defenders usually are not tall enough to properly challenge it, and the ones who are don’t have the foot speed to keep Durant from getting to his spot and rising up.

On the Nets’ first offensive possession against Oklahoma City on Sunday, Durant grabbed the ball on the baseline and, in the blink of an eye, pulled up for an 18-foot jumper over the 6-foot-8 Thunder forward Darius Bazley. Players slower than Durant might have stepped back a few feet and shot a 3-pointer, and shorter players might have tried to drive. But Durant is quick enough to drive right or left and tall enough to shoot over Bazley or back him down in the post. Bazley was at a disadvantage the moment Durant caught the ball.

A secondary move Durant often turns to in the midrange is some variation of a fadeaway jumper, sometimes off one leg. One example: In the second quarter on Sunday, once again with Bazley matched up on him, Durant backed down his opponent in the post. The Thunder, realizing that Bazley was overmatched, sent a second defender to try to disrupt Durant. No dice. Durant simply turned around and went away from both defenders in the air and hit a jumper. Neither was tall enough to disrupt his view of the basket. In the third quarter, he hit a virtually identical shot.

Defenders often try to gain advantages by anticipating the offense’s moves and being a split-second faster. But how can one prepare for Durant, who does all the usual things well, and is an eager threat from an area of the court defenders typically don’t have to worry about? And how does one properly contest a fadeaway when your opponent is already taller than you? Durant’s ability to dominate in an overlooked area opens up a world of options for the Nets, in that it forces defenses to game plan for guarding players all over the court, rather than just at the 3-point line or at the basket.

Or as Durant put it in a post on Twitter in 2019: “I usually play off of feel though, if I’m hot from the 3 then I’m taking a lot of 3s, if my middy workin then that’s where I’m goin for dinner. If the lane open then I’m staying in the paint.”

It’s unlikely that Durant will continue to shoot better than 70 percent from 16 feet out for the whole season. Chris Paul, the Suns guard who is one of the best midrange players in N.B.A. history, shot a career-best 55.7 percent from that range in 2017-18. The best for Tim Duncan, the San Antonio Spurs cornerstone known for his midrange abilities, was 49.4 percent in his second of 19 seasons.

With the Nets having an only average offense so far this season, they may need every bit of Durant’s otherworldly production to maintain their status as a championship contender.