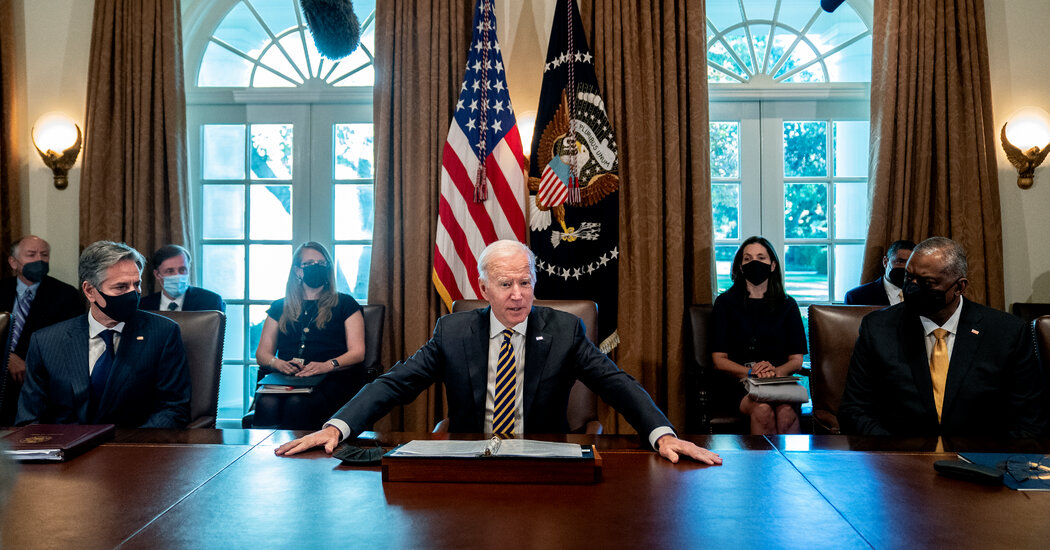 President Biden on Monday will celebrate a key victory in his legislative agenda — and the fulfillment of a central promise of his 2020 campaign — by signing into law a $1 trillion infrastructure spending bill at the White House, surrounded by lawmakers from both parties who backed the measure.

But the moment of good will and cooperation is likely to be fleeting for the president, who just hours later will spend several hours in a virtual summit with President Xi Jinping of China as the two leaders confront the growing tensions between their countries.

The rest of Mr. Biden’s agenda, including a separate $1.85 trillion social spending bill, remains locked in a procedural brawl among members of his own party in Congress. The effort to untangle those competing interests also resumes Monday, ahead of the Thanksgiving recess next week.

White House officials are bracing for an analysis from the Congressional Budget Office, expected this week, that will indicate whether the spending in the sprawling bill will be entirely offset by new tax revenue — something that moderate Democratic lawmakers in the House and Senate have demanded.

Some officials are nervous that the C.B.O. will determine that stepped up enforcement by the Internal Revenue Service will not generate the hundreds of billions of dollars in new revenue that Mr. Biden’s administration has predicted. That would make it harder to claim that the spending is paid for.

And across town, at a federal courthouse in Washington, Stephen K. Bannon, who served as the chief strategist for President Donald J. Trump, surrendered to the authorities after a federal grand jury indicted him for contempt of Congress for refusing to cooperate with the committee investigating the Jan. 6 attack on the Capitol.

Mr. Bannon’s legal troubles underscored the ongoing battle confronting the Biden administration about whether and how to hold Mr. Trump and his allies accountable for the lives that were lost on Jan. 6 and for the attempt to subvert the normal democratic process of counting votes in a presidential election.

White House officials are hoping that the bipartisan scene at the bill signing on the South Lawn of the White House on Monday provides a bit of a respite from the challenges that face the president. Officials said that Republicans from both chambers who voted for the infrastructure measure would be at the White House to watch it become law.

During his campaign for president, Mr. Biden promised that he would be able to win the support of Republicans and Democrats for his policies. That message resonated with voters after four years in which Mr. Trump clashed spectacularly with Democrats.

But much of Mr. Biden’s legislation so far has been passed with little support from the opposing party. His $1.9 trillion pandemic relief package was passed in the Senate and the House without any Republican support. And his social spending plan, known as Build Back Better, is likely to pass with only Democratic votes.

That reality made the bipartisan passage of the infrastructure measure in the House and Senate sweeter for Mr. Biden and his aides in the White House.

The ceremony on Monday will be followed by a burst of presidential travel aimed at showing the American people real examples of how the new law will pump money into the economy and provide good-paying jobs by upgrading roads, bridges, lead pipes, broadband and other infrastructure.

On Tuesday, Mr. Biden is expected to travel to New Hampshire, where he will give remarks at a bridge over the Pemigewasset River that is in critical need of rehabilitation. The following day, he will visit a General Motors electric vehicle assembly plant in Detroit.

Stephen K. Bannon, who served as a senior aide to former President Donald J. Trump, turned himself in to the authorities on Monday morning, three days after he was indicted by a federal grand jury on two counts of contempt of Congress for refusing to provide information to the House committee investigating the Jan. 6 attack on the Capitol.

Mr. Bannon arrived at the F.B.I.’s Washington field office at around 9:30 a.m., where he surrendered to the authorities.

He is expected to make his initial appearance in federal magistrate court on Monday afternoon before Judge Robin M. Meriweather.

While the court proceeding is expected to be swift, with Mr. Bannon entering his plea, it kicks off what could be a lengthy battle between a member of Mr. Trump’s inner circle and the federal government, as it seeks to enforce a congressional subpoena.

Mr. Bannon, 67, had declined last month to comply with subpoenas from the committee seeking testimony and documents from him. The House then voted to hold him in criminal contempt of Congress.

Mr. Trump has directed his former aides and advisers to invoke immunity and refrain from turning over documents that might be protected under executive privilege.

Senator Patrick J. Leahy, Democrat of Vermont and the chamber’s longest-serving member, announced on Monday that he would retire at the end of his term rather than seeking re-election in 2022, closing out nearly half a century of service in Congress.

Mr. Leahy, first elected in 1974 at age 34 after working as a prosecutor, announced his decision at a news conference in Montpelier, Vermont’s capital.

The only sitting senator who served during President Gerald Ford’s term, Mr. Leahy is the first and only registered Democrat to be elected to represent Vermont in the Senate. Mr. Leahy recently became the fourth longest-serving senator in American history, according to Senate records, and finishing his term at the end of 2022 will make him the third longest-serving.

Mr. Leahy serves as president pro tempore of the Senate — a role reserved for the majority party’s most senior member that puts him third in line to the presidency — and the chairman of the powerful Senate Appropriations Committee, which oversees government funding.

President Biden and President Xi Jinping of China will meet for more than three hours in a virtual summit on Monday evening as the United States seeks to engage in what the administration calls “intense competition” with China while preventing serious conflict.

Since becoming president, Mr. Biden has spoken twice with Mr. Xi, but they have not met in person this year. Administration officials said the virtual meeting was meant to reassure both sides that misunderstandings and miscommunications would not lead to unintended clashes.

A senior U.S. official told reporters on Sunday that the president would emphasize the need to keep “communication lines open” as the two countries confront disagreements over issues like the future of Taiwan, the militarization of the South China Sea and cybersecurity.

Mr. Biden has repeatedly suggested that it should be possible to avoid active military engagement with China, even as the United States engages in vigorous competition with Beijing and continues to confront the Chinese leadership on several significant issues.

But the call, which was initiated at Mr. Biden’s request, reflects his administration’s deep concern that the chances of keeping conflict at bay may be diminishing.

Members of Mr. Biden’s team have been guarded about what topics he intends to raise with Mr. Xi on Monday. The senior administration official, who spoke on the condition of anonymity to preview the meeting, broadly outlined a few of the issues that were likely to come up.

The official said Mr. Biden planned to address several points of disagreement, including China’s human rights abuses, America’s commitment to defending Taiwan, China’s support of its state-based industries and its policies regarding cybertechnologies.

Also on the agenda are areas in which Chinese and American interests appear to be aligned, including efforts to combat global warming. But the administration official said that Mr. Biden would make clear to Mr. Xi that working to prevent climate change was not a “favor” to the United States, but rather a decision by China to act in its own best interests.

It was unclear whether Mr. Xi intended to raise other issues, such as U.S. tariffs on Chinese goods or the recent U.S. deal to provide nuclear submarines to Australia. The senior official said that Mr. Biden was not planning to raise those topics unless Mr. Xi mentioned them.

The official declined to say whether the two leaders would discuss the possibility of U.S. representation at the 2022 Winter Olympics, which will be held in Beijing in February.

Biden administration officials have said they believe the U.S.-China relationship is in a new phase that is more dynamic and complex than it has been in years past. But it remains unclear how Mr. Biden will try to accomplish his goals when previous administrations tried and failed to make good on similar agendas.

President Barack Obama tried a similar balancing act with the Chinese, securing a commitment from Mr. Xi to avoid militarizing the South China Sea — a threat to international travel through the area — and to reduce cyberconflicts between the two countries.

Since then, China has built up its military presence in the South China Sea, and cyberclashes have intensified.

President Biden is set to sign the $1 trillion infrastructure bill into law on Monday afternoon, a bipartisan victory that validates his throwback theory of how to get things done in Washington but that does not deliver on the full scale of his ambitions for overhauling the nation’s transportation and energy systems.

Mr. Biden plans to sign the measure at a 3 p.m. ceremony on the South Lawn of the White House, where he will be surrounded by lawmakers from both parties. The New York Times will have live video of the event when it takes place.

The infrastructure bill does not address the entirety of the nation’s backlog of needed infrastructure investments, and it falls short of Mr. Biden’s initial $2.3 trillion proposal. Compromises were needed to win over a large group of Senate Republicans, and the president’s ambitions for investing in so-called “human infrastructure” like home health care and fortifying the nation’s physical infrastructure to fight and adapt to climate change were ultimately whittled down or eliminated.

But economists largely agree that the measure is the most important step in a generation toward upgrading the nation’s roads, ports, rails, pipes, power lines, broadband cables and more — and that it could soon begin to pay dividends for a wide range of businesses and people, from electric vehicle manufacturers to rural web surfers.

Rocketing inflation has become a headache for U.S. consumers, and President Biden has a go-to prescription: a $1.85 trillion collection of spending programs and tax cuts that is languishing in the Senate.

A wide range of economists agree with the president — but only in part, Jeanna Smialek and Jim Tankersely report for The New York Times.

The extent to which Mr. Biden’s $1.85 trillion bill exacerbates inflation largely depends on how much it stimulates the economy and whether Americans increase their spending as a result of the legislation — and when all of that occurs.

Many economists say it could create a short-term stimulus because the plan is structured to raise money gradually by taxing wealthier Americans, who are less likely to spend each additional dollar they have, and redistribute it quickly to people who earn less and are more likely to spend newfound cash.

“According to the economic experts, this bill is going to ease inflationary pressures,” the president said on Wednesday.

Still, the 17 Nobel Prize-winning economists that the White House regularly cites have specified that capacity improvements will ease inflation over time rather than imminently.

“Because this agenda invests in long-term economic capacity and will enhance the ability of more Americans to participate productively in the economy,” they wrote, “it will ease longer-term inflationary pressures.”

President Biden’s economic measures are drawing more complicated reviews when it comes to its immediate effect on inflation. READ THE ARTICLE →