Home  /  News   /  How Ukraine’s Leaders Are Responding to Russian Threat 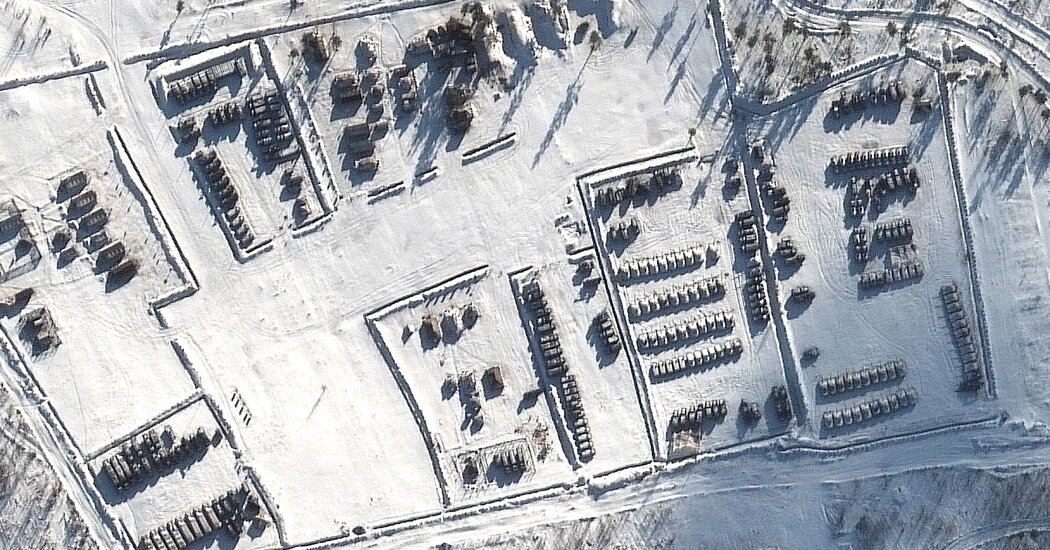 How Ukraine’s Leaders Are Responding to Russian Threat

And yet despite the buildup — and even with the United States warning that an attack could come imminently, and NATO forces on alert — Ukraine’s leadership is playing down the Russian threat.

That posture has left analysts guessing about the leadership’s motivation, with some saying it is to keep the Ukrainian markets stable, prevent panic and avoid provoking Moscow, while others attribute it to the country’s uneasy acceptance that conflict with Russia is part of Ukraine’s daily existence.

On Tuesday, Russia announced a flurry of military drills, from the Pacific Ocean to its western flank around Ukraine, a demonstration of the vast reach of its forces. And, wary of the threat that Russia could turn off fuel sales to Europe in the depths of winter, the Biden administration is making plans for gas and crude oil suppliers from the Middle East, North Africa and Asia to bolster supplies to Europe in coming weeks.

But as the Kremlin and the West square off, Ukrainian officials are projecting an air of calm. Already this week, Ukraine’s defense minister has asserted that there had been no change in the Russian forces compared with a buildup in the spring; the head of the national security council accused some Western countries and news media outlets of overstating the danger for geopolitical purposes; and a Foreign Ministry spokesman took a swipe at the United States and Britain for pulling the families of diplomats from their embassies in Kyiv, saying they had acted prematurely.

This week’s proclamations came after an address to the nation last week by Ukraine’s president, Volodymyr Zelensky, in which he asked, “What’s new? Isn’t this the reality for eight years?” On Tuesday evening, Mr. Zelensky weighed in on the embassy withdrawals, insisting in a Facebook post that this “did not mean escalation is inevitable.”

How to interpret the threat from Russian troops and equipment massed at Ukraine’s border is a subject of intense debate. Ukraine’s own military intelligence service now says there are at least 127,000 troops on the border, significantly more than were deployed by Russia in the spring buildup.

That number does not yet include the troops and equipment arriving now in neighboring Belarus, a Russian ally, ahead of military exercises next month. The United States says those drills could be used as a pretext to place forces within striking distance of Ukraine’s capital, Kyiv.

Even so, in an interview on Monday with the Ukrainian television station ICTV, Ukraine’s defense minister, Oleksii Reznikov, seemed to wonder what all the fuss was about.

“Today, at this very moment, not a single strike group of the Russian armed forces has been established, which attests to the fact that tomorrow they are not going to invade,” Mr. Reznikov said. “That is why I ask you to not spread panic.”

There are different reasons for the disconnect in messaging between Ukrainian officials and their American counterparts, analysts say. Mr. Zelensky must be deft in crafting a message that keeps Western aid flowing, does not provoke Russia and reassures the Ukrainian people.

And after eight years of war with Russia, experts say, Ukrainians simply calculate the threat differently than their Western allies. In 2014, Russian commando units seized the Crimean Peninsula and Russian-backed separatists tried to claw away two eastern Ukrainian provinces. Troops are dug into trenches on both sides of a so-called line of contact that frequently crackles and pops with small-arms and mortar fire. More than 13,000 people have been killed in the conflict.

“We understand the plans and intentions of Russia; for us crying out from fear is not necessary,” Oleksii Danilov, the head of Ukraine’s national security and defense council, said in an interview with the BBC published Monday.

Mr. Danilov and others in the Ukrainian government argue that sowing panic and disarray within Ukrainian society is as much a part of the Russian strategy as any eventual military action. So showing fear, even if there is a basis for it, is only handing their enemies a victory before a single shot is fired.

“The No. 1 task of Russia is the shattering of the internal situation in our country,” Mr. Danilov said. “And today, unfortunately, they are doing this successfully. Our task is to do our jobs in a calm and balanced environment.”

The United States has its own reasons for the way it has called out the Kremlin of late. Washington has to send a strong message both to Moscow and to allies in Europe, like Germany, who might be more hesitant to take a robust stance against Russia, said Maria Zolkina, a political analyst with the Democratic Initiatives Foundation, a Kyiv-based think tank.

But there is a risk that Washington’s messaging, which includes putting 8,500 troops on “high alert” for possible deployment to NATO’s eastern frontier, could provoke the Kremlin further, or at least be used to justify a more aggressive posture. On Tuesday, Dmitri S. Peskov, the Kremlin’s spokesman, said Moscow was watching NATO troop movements “with profound concern.”

Since taking office three years ago, Mr. Zelensky has adopted a light touch in dealing with Moscow. That seemed to pay some dividends earlier in his tenure, Ms. Zolkina said, but faced with this new crisis such an approach can appear weak.

Understand the Escalating Tensions Over Ukraine

Ominous warnings. Russia called the strike a destabilizing act that violated the cease-fire agreement, raising fears of a new intervention in Ukraine that could draw the United States and Europe into a new phase of the conflict.

The Kremlin’s position. President Vladimir V. Putin of Russia, who has increasingly portrayed NATO’s eastward expansion as an existential threat to his country, said that Moscow’s military buildup was a response to Ukraine’s deepening partnership with the alliance.

“Now when there is a real scenario in which Russia might invade Ukraine or carry out some kind of hybrid attack on Ukraine, this kind of handling is a losing strategy for Ukraine,” she said. “The West is carrying out negotiations that don’t involve us.”

Not everyone in the country agrees with the current government’s approach. Last weekend, the leaders of Ukraine’s varied and often raucous political opposition pressed Mr. Zelensky to set aside calls for calm and prepare the country for war. A collection of Parliament members from different parties, as well as the former president, prime minister and foreign minister, signed a communiqué calling on Mr. Zelensky to mobilize Ukraine’s forces to confront “the deadly threat from Russia that is looming over Ukraine.”

“He believes that if he scares the Ukrainian people, his approval rating will go down,” Arseniy P. Yatsenyuk, who was Ukraine’s prime minister when the war broke out in 2014, said of Mr. Zelensky. “If Russia starts its invasion, we have to forget about politics and the approval rating in this country because I’m not sure we will have a chance to have our next parliamentary or presidential elections.”

Ukrainians are preparing themselves, even if signs of all-out mobilization are not entirely visible. Across the country, thousands of people have signed up to learn combat skills in classes put on by the Ukrainian government and private paramilitary groups. The goal is to create a force of civilian defenders who can carry on an insurgency should the main force of the Ukrainian military be decimated in a Russian attack.

In the city of Chernihiv — about a two-hour drive due north of Kyiv and directly within the path of any Russian advance on the capital — some residents expressed hope that the government would do more to prepare the country for a possible attack.

“The president and his administration see absolutely no threat,” said Lyudmila Sliusarenko, a 73-year-old retired teacher. “So anything that can be done to stop Putin will have to come from the West.

“But,” she added, “if there is an attack, the whole people will stand as one.”