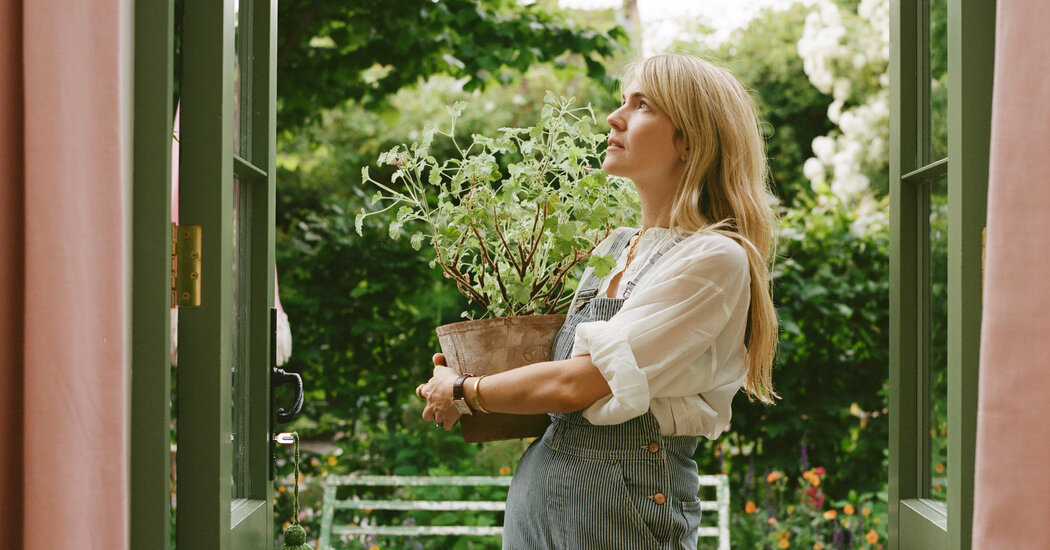 How to Create a Secret Garden in Your Own Backyard


On the north side of Matilda Goad’s home in London, tucked in a nook between the kitchen and the living room, is a small courtyard paved with granite cobblestones. The narrow yard, flanked on one side by a clematis-strewn fence, has a distinctly rural feel, partly thanks to a salvaged Butler porcelain sink propped against the left-hand wall that, on a bright day in June, is filled with soaking dahlia tubers and foxgloves ready to be planted. A few steps away, above an old zinc bath that contains hydrangea shrubs, their stems hidden by soleirolia, is a porthole window that affords a view through the living room and to the garden at the back of the house. Many a space-strapped Londoner would have opted to build out into this strip of land, known in Britain as a side return, snatching up additional square footage and ramming up against their neighbor’s boundary in the process. Not Goad. “I’m always thinking about creating a slightly unexpected moment,” she says.

Indeed, unexpected moments have become the 31-year-old homeware designer and creative consultant’s calling card. Her new range of pleated lampshades, for instance, adheres to a cozy cottage aesthetic, but for the fact that the shades are rendered in solid brass. And her house, a red-brick Victorian-era structure on an oak-lined street in the city’s Kensal Rise neighborhood that she purchased with her husband, Tom Corbett-Winder, in 2018, and renovated the following year, has plenty of quirk. Goad chose to place the kitchen at the front of the home, rather than at the back, as is typical of turn-of-the-20th-century terraced houses, and added a pantry, an old-fashioned feature that’s come in handy during the pandemic. She also decided that the best way to maximize space upstairs was to reconfigure things so that one enters the main bedroom through its en suite bathroom. In another shirking of English tradition, the roughly 600-square-feet garden has no hint of a lawn.

“I wanted to shake up what could have been a formulaic layout, creating a sense of discovery even in a small space, which is what I like to do with interiors,” says Goad. To accomplish this, she sought advice from the American-born, London-based garden designer Butter Wakefield. “Though I grew up in the countryside, where my mum has a beautiful garden, I’d never had one myself,” Goad says. “I’d seen that Butter had done a tiny London patio which was really inventive.” Wakefield, in turn, was an admirer of Goad’s, having purchased one of her stripy ceramic jugs several years prior. She was also undaunted by the “jungle” she encountered upon her first visit to Goad’s in September 2019. The previous owners worked in theater — he as a producer and she as a set designer — and the garden was filled to the brim with plants, statues, mirrors and stage props. “You almost needed a machete to beat your way to the back wall,” Wakefield recalls with a laugh. “But it had a well-loved, characterful feeling going for it. And there were pockets of mystery.”

To maintain and enhance those pockets, Wakefield devised an economical plan — Goad was nearing the end of her house renovations and budgets were tight — that hinged on dividing the garden into sections. “A lot of people want a lawn in the middle and borders round the sides, but I thought it would be nice to walk through two hedges, and beyond the second hedge, the garden would open up into an outdoor dining area that catches the sun all day,” says Wakefield. This also gives a visitor the impression that they’ve stumbled into a secret idyll that, while objectively modest in size, is still larger than one would guess based on the view from the three sets of khaki-green-painted double doors at the back of the house, which includes little more than hedges and a bed of jolly orange geums, purple catmint and alliums and acid-green Alchemilla. “Butter was also really clever at preserving elements of what we’d inherited,” says Goad. “Some of the pink roses, for instance, are a bit brash for me, but she insisted we keep them.” One thing Goad insisted on was that they not use yew hedges, which she felt would look too manicured — “I wanted something loose and free,” she says — and so they opted for hornbeam ones instead.

No planting could take place, however, until 20 dumpsters’ worth of detritus, which included yards of rotting trellis, were removed by the builders. Next, reclaimed railroad ties were stacked to box in the existing flower beds and create the L-shaped seating area, the heavy planks of oak doubling as benches. The ground was leveled and covered with gravel that, when funds allowed, was later replaced with more granite cobblestones (extensive FaceTiming between Goad and Wakefield ensured they didn’t end up too gridlike). New trellises were erected along both boundaries. And a small compost mound was repurposed as a raised bed, which bloomed this past spring with tulips. It now boasts neat lines of rocket, purple sage, basil, carrots and pea shoots, and, later this year, will hopefully be chock-full with dahlias grown from the tubers in the sink, which were taken from Goad’s mother’s garden in West Sussex. Goad is also fond of geraniums, which fill a vintage wrought-iron plant stand near the left-hand brick wall. “Someone told me Instagram had killed geraniums, that they’re not cool anymore,” says Goad. “But I like the smell. They remind me of my granny.”

Most summer evenings following a long day at her desk, and once her 1-year-old daughter, Domino, has settled into sleep, Goad meanders around deadheading and watering. “Just half an hour can be so therapeutic,” she says. She and Corbett-Winder are also enjoying hosting languorous weekend lunches in the rustic dining area — canopied by a high tangled hedge of wild buttercream roses — for friends, who feel especially precious after a year of lockdown. They plan to install a concrete-topped table down the line but, for now, make do with an old wooden style that they dress up with Hungarian linen tablecloths. “It’s so much easier entertaining outside, with kids especially,” says Goad, her gaze drifting to a newly planted cutting, this one of wild strawberry and taken from Corbett-Winder’s mother’s garden in Wales. “I love the idea of inheriting plants, that they travel all around. Not that he looks very happy right now,” she says as she tips a glass of water into the soil. In doing so, she brushes against a blur of knotted cranesbill to reveal an otherwise mostly obscured stone nymph that was another detail from the earlier iteration of the garden that Wakefield pushed to keep. As Goad says of the statue, “She’s part of the mystery.”

Here, Goad and Wakefield share their tips for creating a lush city garden.

“The biggest mistake when dealing with a small garden is to treat it like a small garden. Think as big as you possibly can!” says Wakefield. “I once filled a tiny city plot with huge tree ferns. They were the largest the garden could accommodate and it was hell getting them through the house, but they looked great in situ.” Mirrors can seemingly help to expand the square footage, but they shouldn’t be exposed. “They need to be behind a trellis, so that you can’t keep looking at yourself, as that’s very annoying,” she adds.

Wakefield suggests adding garden furniture, whatever the size of the plot. “Even if it’s purely visual, if you can get a chair outside, it creates a different dimension,” she says. Railroad ties, which are a cost-effective way of boxing in beds, can also provide extra seating for guests — in Goad’s garden, they serve as benches for her large table, while the raised bed in the center of the garden allows people to perch when they peel off to mingle away from the table.

Bring the Inside Out

“Outdoor furniture and furnishings can be incredibly expensive and are easy to overlook when you draw up an initial budget,” says Goad. Instead, pull out the cushions and blankets that might otherwise accent your living room. “Having tons of cushions just to use outdoors that you can only utilize for 10 days of the year and have nowhere to store for the rest of the year is not very viable. Be inventive,” says Goad, who adds that she likes to use Hungarian linen for tablecloths because “it often comes in long stretches and is a heavier weight that absorbs stains easier.”

Goad and Wakefield sourced antique ribbed zinc planters known as dolly tubs, now filled with nasturtiums and jasmine, and a wrought-iron plant stand on eBay and at London’s Sunbury Antiques Market. “Planters add another level of interest and allow you to go vertical,” says Wakefield. “They give you a focal point and, set against a wall, they provide a base for climbers so that when you look at brickwork you see something green and growing.”

Two plants that are often overlooked, but feature regularly in Wakefield’s gardens? “Alchemilla mollis is a velvet-leaf perennial with frothy, flowery leaves that looks so pretty in pots and in borders. It can do shade or sun and it’s the most perfect edging plant,” she says. “There’s also another little evergreen creeper called mind-your-own-business — or Soleirolia soleirolii — which can grow in the darkest, dankest, deepest shade, and I love how it migrates from pots and across paved areas. If you’re precious about your lawn, do not entertain it — even the tiniest leaf will take hold. But I personally don’t mind that. If it’s green and it’s growing, then hooray.”

Don’t Be Afraid to Get Your Hands Dirty

“Lots of people with busy lives kind of panic when it comes to gardening,” says Wakefield. “But the best gardens are tended by their owners. What’s the worst that can happen? Something dies. It pays to experiment.”