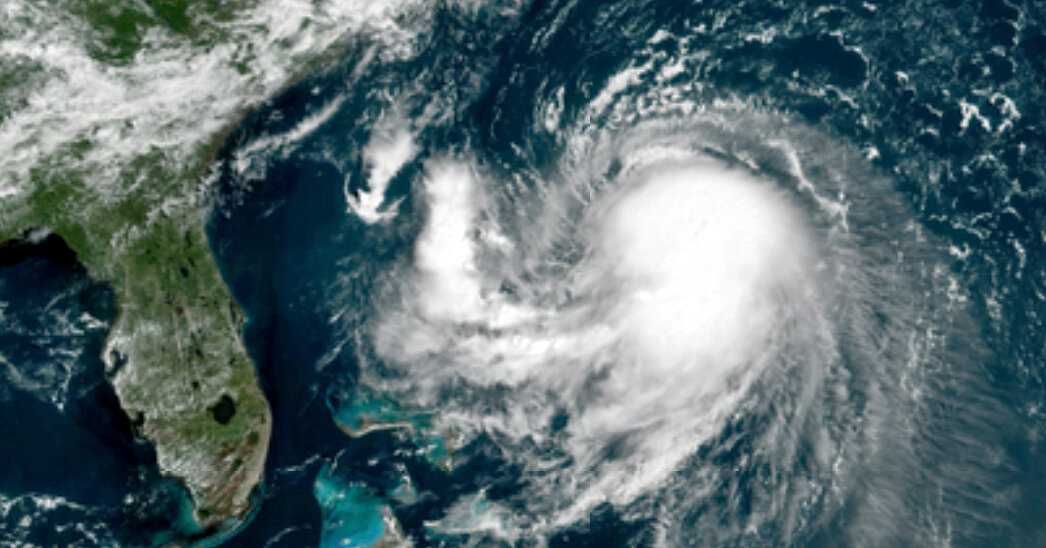 Tropical Storm Henri is expected to become a hurricane by Saturday and could make landfall in southern New England by Sunday, according to meteorologists.

A tropical storm warning was in effect for areas from Manasquan, N.J., to west of East Rockaway, N.Y., including New York City, the Hurricane Center said.

On Friday evening, Gov. Ned Lamont of Connecticut declared a state of emergency to provide the state with federal assistance needed for storm response.

Hurricane-strength winds in Northeastern states like Connecticut, Rhode Island and Massachusetts would be unusual, should they arrive. The last time a hurricane made landfall in New England was 30 years ago.

By Friday night, Henri was “almost a hurricane,” according to the Hurricane Center, with maximum sustained winds of 70 miles per hour. The storm is expected to be at or near hurricane strength when it makes landfall on Sunday.

Henri was moving north at 9 m.p.h. late Friday night and was expected to accelerate in that direction through early Sunday, the Hurricane Center said.

As of late Friday night, Henri was 230 miles south-southeast of Cape Hatteras, N.C.

Of three storms that recently formed in the Atlantic Ocean, Henri, which developed on Monday off the East Coast of the United States, formed most recently.

Most of the attention early this week was on Tropical Depression Fred, which made landfall in the Florida Panhandle on Monday afternoon as a tropical storm, and Hurricane Grace, which came ashore in Haiti as a tropical depression before making landfall as a hurricane on the Yucatán Peninsula in Mexico on Thursday. It is now approaching the east coast of Mexico’s mainland.

Henri is expected to bring up to six inches of rain over New England on Sunday and Monday, with isolated totals near 10 inches. Heavy rainfall across the area could bring some flooding. Some coastal areas could experience storm surges as high as five feet.

The Hurricane Center said on Friday night that “heavy rainfall may lead to considerable flash, urban and small stream flooding” over portions of Long Island and New England on Sunday and Monday.

The National Weather Service in New York said that in Long Island and Connecticut, destructive winds, life-threatening storm surges and heavy rainfall were all likely.

In New York City and parts of New Jersey, there is a chance of winds of 30 to 40 miles per hour on Sunday, according to the Weather Service.

When Hurricane Bob hit New England in 1991, it killed at least a dozen people, brought down power lines and wrecked houses as neighborhoods flooded.

Gov. Charlie Baker of Massachusetts said on Friday that residents and vacationers in Cape Cod should leave the area before the storm reached full force on Sunday. He said he was prepared to deploy up to 1,000 National Guard troops to help with evacuations if necessary.

What is “landfall”? And what are you truly facing when you’re in the eye of the storm?

During hurricane season, news coverage and forecasts can include a host of confusing terms. Let’s take a look at what they mean →

You may read about hurricanes, typhoons or cyclones. So what’s the difference? Location.

“Hurricane” is largely used in the North Atlantic and Northeast Pacific; “typhoon,” in the Northwest Pacific; and “cyclone” in the South Pacific and Indian Ocean.

The Atlantic season, when hurricanes and tropical storms are most likely to hit the U.S., runs from June 1 to Nov. 30.

Here’s what all these storms have in common: They’re low-pressure circular systems that form over warm waters. A system becomes a tropical storm when its winds exceed 39 miles an hour. At 74 miles an hour, it’s a hurricane.

Forecasters regularly talk about parts of the storm like the eye, the eyewall and the wall cloud:

Instead, landfall is when the eye crosses the shoreline.

While it is not uncommon for several weather systems to be active at once during hurricane season, forecasters with the National Hurricane Center said, it is somewhat unusual for there to be three at the same time that have prompted tropical storm watches or warnings for land areas.

The links between hurricanes and climate change are becoming more apparent. A warming planet can expect stronger hurricanes over time, and more of the most powerful storms — though the overall number of storms could drop, because factors like stronger wind shear could keep weaker storms from forming.

Hurricanes are also becoming wetter because there is more water vapor in the warmer atmosphere; scientists have suggested that storms like Hurricane Harvey in 2017 produced far more rain than they would have without the human effects on climate. Rising sea levels are also contributing to higher storm surges, the most destructive element of tropical cyclones.

A major United Nations climate report released this month warned that nations have delayed curbing their fossil-fuel emissions for so long that they can no longer stop global warming from intensifying over the next 30 years, leading to more frequent life-threatening heat waves and severe droughts. Tropical cyclones have probably become more intense over the past 40 years, the report said, a shift that cannot be explained by natural variability alone.

In May, scientists with the National Oceanic and Atmospheric Administration forecast that there would be 13 to 20 named storms this year, six to 10 of which would be hurricanes, and three to five major hurricanes of Category 3 or higher in the Atlantic. In early August, in a midseason update to the forecast, they continued to warn that this year’s hurricane season would be an above-average one, suggesting a busy end to the season.

Matthew Rosencrans, of the National Oceanic and Atmospheric Administration, said that an updated forecast suggested that there would be 15 to 21 named storms, including seven to 10 hurricanes, by the end of the season on Nov. 30. Henri is the eighth named storm of 2021.

Last year, there were 30 named storms, including six major hurricanes, causing meteorologists to exhaust the alphabet for a second time and move to using Greek letters.