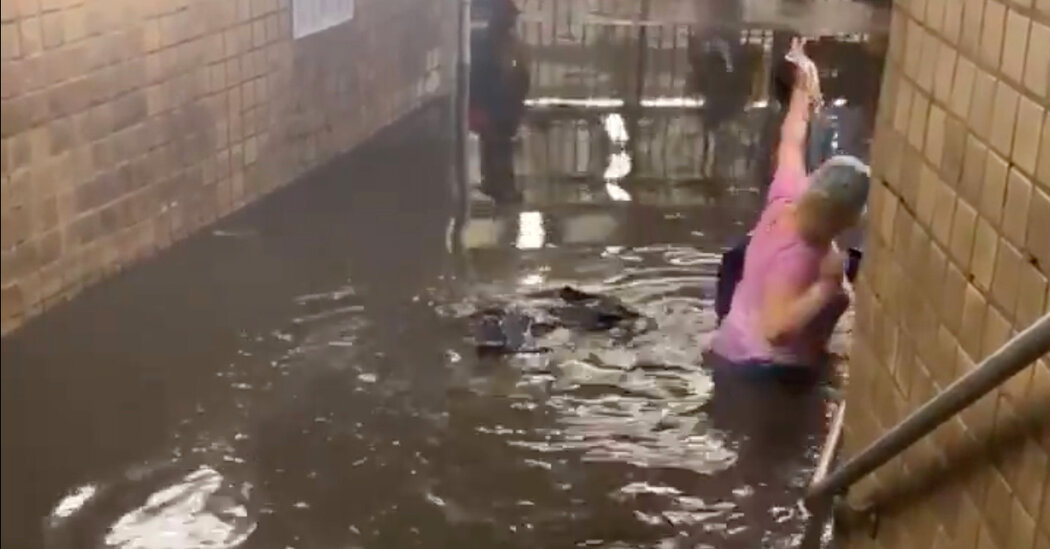 
Fierce thunderstorms hit New York City and its suburbs on Thursday, prompting the police to rescue more than a dozen people from one flooded stretch of highway and forcing would-be subway riders to navigate waist-deep waters on their way into one Upper Manhattan station.

The heavy showers, accompanied by repeated bursts of booming thunder and crackling lightning, led to flash flooding across the region less than 12 hours before the arrival of Tropical Storm Elsa.

Flash flood watches were in effect for parts of New York, New Jersey and Connecticut until noon on Friday, as Elsa was expected to deliver heavy rain across the area.

Videos posted on Twitter showed several subway stations taking on water — some from above, some from below. The No. 1 station at Broadway and 157th Street in Manhattan appeared to suffer the most dire effects of the storm, with some passengers opting to wade through filthy water on their way to the platform.

Transit officials, already girding for Elsa’s arrival, said they had crews out across the city addressing the flooding problems as quickly as possible and warned against entering stations that might still be inundated.

“Drains are working remarkably well,” Sarah Feinberg, the interim president of New York City Transit, which operates the subway, said in a message on Twitter.

The agency’s crews, she added, were “as always, working hard and fast and doing great work. Give them room to work and be safe.”

Subway service itself was largely uninterrupted, with only the northernmost end of the A line shut down as a result of the rains, officials said.

In an interview, Ms. Feinberg said the flooding of stations on Thursday was a result of a confluence of factors: underground drains being overwhelmed by the ferocity of the rain; vents and stairways serving as conduits for the same reason; and street-level flooding spilling over curbs and down into the subway.

She also said that the rain’s impact on Upper Manhattan was unusual.

“What was different about this storm was that we got pounded by rain in places that don’t typically flood,” she said, adding that while A train service from 181st Street to 207th Street was still suspended as of 8:30 p.m., the flooding problems at 157th Street had largely been cleared several hours earlier.

Ms. Feinberg also urged users of the subway to put their safety first, to be patient and not to try to enter stations that appeared impassable.

Responding to a video of the scene at that station earlier in the day, Eric Adams, the newly declared winner of the city’s Democratic mayoral primary, took aim at the Metropolitan Transportation Authority, the parent of Ms. Feinberg’s agency, in a message on Twitter.

Mr. Adams also called for the adoption of a languishing plan that would enact congestion pricing, charging motorists who enter Midtown Manhattan as a way of giving the transportation authority a financial infusion.

“This is what happens,” Mr. Adams wrote, when the authority “makes bad spending decisions for decades. We need congestion pricing $ ASAP to protect stations from street flooding, elevate entrances and add green infrastructure to absorb flash storm runoff. This cannot be New York.”

Even on a dry day, water is a threat to a system that runs on electrical power. And floods caused by broken water mains and natural disasters like Hurricane Sandy periodically swamp the subway, which is bored through layers of stone, traverses stopped-up natural springs and is surrounded by groundwater.

Local highways faced their own problems, with the most serious on a section of the Major Deegan Expressway near East 179th Street in the Bronx. Police officers used a barrier truck to rescue more than a dozen people after their cars got caught in the fast-rising waters, officials said.

As of 5:45 p.m., the National Weather Service’s New York office was reporting that 2.4 inches of rain had fallen on Hering Avenue in the Bronx, near Pelham Parkway, since about 1 p.m. By 8 p.m., about 2.3 inches had been reported in Central Park, the Weather Service said.

Joe Pollina, a Weather Service meteorologist, described the day’s storms as “severe” and potentially dangerous because of the potential for flash floods.

“You could be in trouble if you get caught in the wrong place at the wrong time,” Mr. Pollina said.

As for Elsa, the storm’s remnants were expected to drop more rain, with some storm showers mixed in, on the city and the surrounding area starting around midnight, Mr. Pollina said.

The Weather Service was forecasting winds in the 25-to-35 mile-per-hour range starting around 5 a.m. Friday, with some parts of Long Island subject to a tropical storm warning, he added.

Both the transportation authority and New York City Transit had put various measures in place for the storm’s arrival.

Those steps included banning empty tractor-trailers and other trucks on some bridges starting at midnight and deploying crews at key points in the subway system and the authority’s commuter rail lines, the Long Island Rail Road and Metro-North, to ensure that trains kept running throughout the day, officials said.