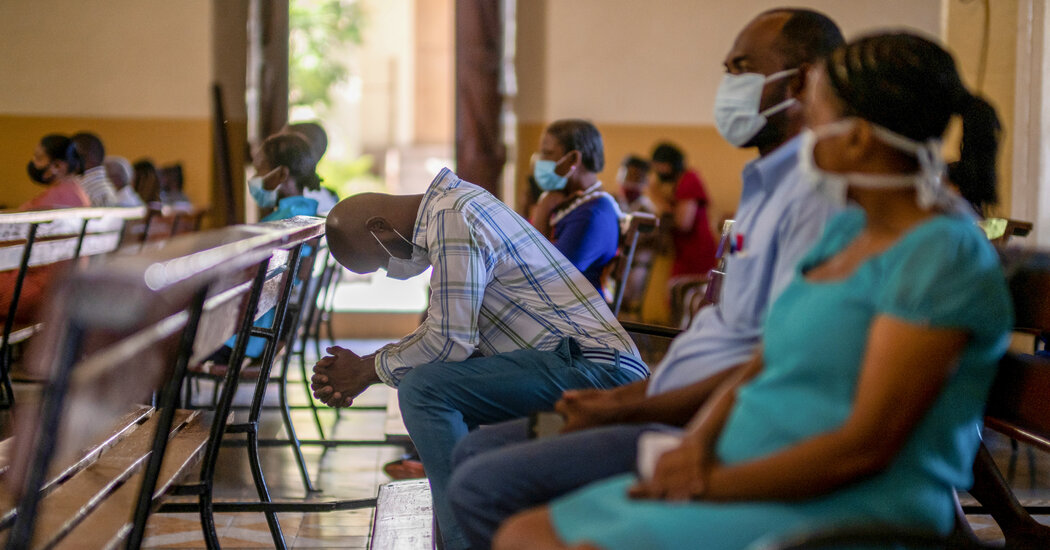 A Haitian-born doctor based in Florida has been arrested as a “central” suspect in the assassination of President Jovenel Moïse, and the national police chief suggested at a Sunday news conference that he believes the suspect was plotting to become president.

The doctor, Christian Emmanuel Sanon, 63, is the third Haitian-born suspect with U.S. ties to be arrested.

“He arrived by private plane in June with political objectives and contacted a private security firm to recruit the people who committed this act,” the police chief said. The firm, he said, was a Venezuelan security company based in the United States called CTU.

“The initial mission that was given to these assailants was to protect the individual named Emmanuel Sanon, but afterwards the mission changed,” Mr. Charles said, implying that Mr. Sanon had meant to install himself as president.

As evidence, Mr. Charles said that Mr. Sanon was the person one of the Colombian suspects contacted after being arrested. During a raid on his home, the authorities said, the police found a U.S. Drug Enforcement Agency cap, a box of cartridges, two vehicles, six pistol holsters, about 20 boxes of bullets, 24 unused shooting targets and four license plates from the Dominican Republic.

A YouTube video recorded in 2011 titled “Dr. Christian Sanon — Leadership for Haiti” appears to present Mr. Sanon as a potential leader of the country. In it, the speaker denounces the leaders of Haiti as corrupt plunderers of its resources.

The night of Mr. Moïse’s death, people who appeared to be arriving to assassinate him shouted that they were part of a D.E.A. operation, according to videos filmed from nearby buildings and synchronized by The New York Times.

Two Americans arrested last week have said that they were not in the room when the president was killed and that they had worked only as translators for the hit squad, according to a Haitian judge who interviewed them. They met with other participants at an upscale hotel in the Pétion-Ville suburb of Port-au-Prince, the Haitian capital, to plan the attack.

The goal was not to kill the president, the two Americans told the judge, but to bring him to the national palace. On Sunday, Mr. Charles said one of the assailants had been given a warrant to arrest the president.

Other suspects include 18 Colombian men, most of them former soldiers, and three Haitians.

The photos are horrifying. They seem to portray the body of President Jovenel Moïse of Haiti laid out in the morgue, his left eye crushed in, the flesh of one of his arms torn by bullets, his mouth gaping.

A country already reeling from the assassination of its leader on Wednesday and the chaos that followed reacted to the images with horror and despair, afraid that the photos circulating on social media channels would rip the last shreds of dignity from both the person and the office he held.

Even his critics were outraged.

“Even if @moisejovenel was decried and declared a de facto president, let’s not go down to the level of dehumanization established by the @PHTKhaiti,” tweeted the journalist Nancy Roc, referring to Mr. Moïse’s political party. “Haitians are better than that.”

She was among many who beseeched others not to forward the photos that were circulating through the country’s buzzing WhatsApp channels.

The authenticity of the pictures could not be independently confirmed, but forensic experts consulted by The Times who reviewed the photographs said that rumors that Mr. Moïse had been tortured — which swirled around social media along with the photos — were unlikely to be true.

“I don’t see anything that looks like it would be typical of torture,” said Dr. Michael Freeman, an associate professor of forensic medicine at Maastricht University in the Netherlands. Dr. Freeman noted that an autopsy would be needed to determine conclusively whether Mr. Moïse was tortured, but the wounds visible in the photographs appeared consistent with gunshots.

Photos of dead bodies left on the streets are sadly regular fare in Haiti. But that the country’s leader would face the same wretched indignity seemed to underscore just how cheap life had become in the country.

The Rev. Rick Frechette, an American Catholic priest with the Congregation of the Passion order and a doctor who regularly treats Haiti’s poor in clinics in Port-au-Prince’s slums and in the hospitals he built in a suburb of the capital, said that for some of his staff members, the president’s brutal assassination had brought back memories of past violence.

“People are traumatized and afraid,” he said.

And then there were those who believed the distribution of the photos was politically motivated, part of the struggle over who will govern the country in the president’s absence.

“Last night’s photos show how much they want to create a climate of violence and instability in the country after their heinous crime,” tweeted Danta Bien-Aimé, a nurse and former Fulbright scholar.

A team of American government investigators has arrived in Haiti to assist the investigation into the assassination of the country’s president, U.S. officials said on Sunday.

While the White House and Pentagon are reviewing the Haitian government’s request for troops to help secure the country, there has been little enthusiasm for sending American soldiers or Marines.

But a team of F.B.I. agents and Department of Homeland Security officials will assist the investigation into last Wednesday’s killing of President Jovenel Moïse of Haiti, John Kirby, the Pentagon press secretary, told Fox News.

“I think that’s really where our energies are best applied right now, helping them get their arms around investigating this incident and figuring out who’s culpable, who’s responsible, and how best to hold them accountable going forward,” Mr. Kirby said.

In the wake of the assassination, there has been a sense of chaos in some parts of Haiti, with some people gathering at the U.S. Embassy there hoping to leave, and competing political factions vying for control of the government.

Chris Wallace of Fox News pressed Mr. Kirby on whether conditions in Haiti were a matter of national security. While the United States is watching the situation closely, Mr. Kirby said, the American investigative team would be “the best way forward.”

“I don’t know that we’re at a point now where we can say definitively that our national security is being put at risk by what’s happening there,” Mr. Kirby said. “But clearly we value our Haitian partners. We value stability and security in that country.”

The Pentagon was caught off guard by the Haitian request for troops, which came on Friday, but Mr. Kirby’s comments on Sunday showed that a few days later the thinking had not shifted, and if anything had hardened against any new deployment.

The Biden administration has been reviewing troop deployments around the world, and has been intent on continuing the drawdown of American forces from Afghanistan and the Middle East.

Just days after the assassination of President Jovenel Moïse of Haiti, a high-stakes battle for control of the country is heating up, and the president of the Senate, Joseph Lambert, is among those jockeying for power.

Although the Haitian Parliament is in a state of dysfunction — with only 10 sitting senators out of 30 because the terms of the other 20 have expired — a majority of the remaining lawmakers on Friday signed a resolution calling for a new government to replace the current interim prime minister, Claude Joseph. They declared that Mr. Lambert, who also has the support of several political parties, should become provisional president.

“He seems to be quite intelligent politically,” Laënnec Hurbon, a Haitian sociologist and researcher at the French National Center for Scientific Research, said of Mr. Lambert.

Mr. Lambert, 60, is from the city of Jacmel in southern Haiti. An agronomist by training, he is a seasoned politician who was elected to the lower house of Parliament in 1995, before winning a seat in the Senate in 2006. He is in his third term as president of the Senate.

In 2019, Mr. Lambert, who had been passed over for the position of prime minister, announced that he was joining the opposition to Mr. Moïse, according to the newspaper Nouvelliste. As Mr. Lambert rose to the Senate’s presidency in January, he criticized Mr. Moïse’s policies but also said that he wanted to cooperate closely with the president to devise solutions to the country’s problems.

On Friday, a dozen parties from all political stripes signed a “protocol of national accord” backing the Senate’s decision and calling for the installation of Mr. Lambert as interim president within the next 48 hours.

“He always knows in perilous, difficult situations like this one, to make the right speech and therefore to seduce the people,” Mr. Hurbon said of Mr. Lambert, adding that he had been surprised to see such a large coalition of opposition parties backing Mr. Lambert’s bid for power.

The Senate’s resolution on Friday said that Mr. Lambert should become provisional president until January, when a new parliament is elected. It also said that Ariel Henry, a neurosurgeon, should replace Mr. Joseph, the current interim prime minister.

Lilas Desquiron, culture minister in Haiti from 2001 to 2004, said that Mr. Lambert was “a skilled politician” who was very popular among civil servants.

“He is someone who plays for himself but plays with a lot of intelligence,” she said.

Colombia has one of the best-trained militaries in Latin America, and because of this, Colombian veterans are highly sought after by global security companies. They deploy them to faraway places like Yemen and Iraq, often paying far more than they could expect to earn in Colombia.

Some 20 Colombian veterans also made it in recent weeks to somewhere far closer to home: Haiti. Now, at least two are dead and at least 18 are in custody, accused of involvement in the assassination of President Jovenel Moïse.

Haitian officials have cast the Colombians as centerpieces of a well-organized plot carried out by “foreign mercenaries” to kill Mr. Moïse, but critical questions remain about what they were really in Haiti to do.

The country’s lead prosecutor has begun looking into what role Haitian security forces may have had in an operation that killed the president and wounded his wife but harmed no one else in the household or in the president’s security retinue.

On the streets in Haiti there is widespread skepticism of the official government line, with many wondering how the assailants got through a fortified compound, defended by Haitian security forces, with no other deaths.

And in Colombia, some family members of the detained Colombians say the men went to Haiti to protect the president, not to kill him. That has only added to the many murky and often contradictory claims surrounding the assassination.

Then on Sunday, the Haitian authorities said they had arrested a Florida-based, Haitian-born doctor whom they described as a central figure in the assassination plot, and said he had hired a private security company that recruited at least some of the Colombians.

Things remain as murky as ever, but to Giovanna Romero, the widow of one of the Colombians killed in Haiti, one thing is clear: Her husband, Mauricio Javier Romero, was no assassin.

“Mauricio never would have signed up for such an operation, no matter how much money he was offered,” she said.