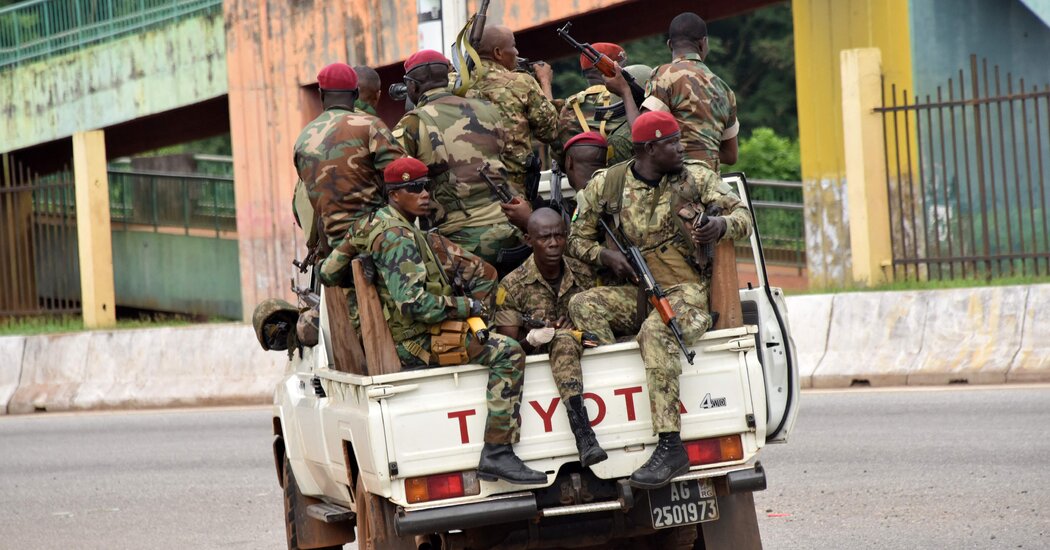 
CONAKRY, Guinea — Heavy gunfire echoed around the capital of Guinea early on Sunday morning. Then pictures surfaced on social media of the West African country’s president being held in custody by men in military fatigues. Finally, the head of Guinea’s special forces announced on state television that the constitution, government and all institutions were dissolved. He had staged a coup.

And if the takeover proves successful, Guinea will become the third West African country to experience a violent transfer of power in the past five months.

In April, the president who had ruled Chad for three decades was killed on the battlefield and replaced by his son in what academics called a “covert coup.” In May, Mali’s vice president arrested the president, prime minister and defense minister in the country’s second coup within nine months.

Sunday’s coup in Guinea comes barely a year after the president, Alpha Condé, won a contentious third term after changing the Constitution, allowing him to stay in power beyond the two-term limit.

“We are no longer going to entrust politics to one man, we are going to entrust it to the people. We come only for that,” declared Col. Mamady Doumbouya, the special forces head, appearing on state television with Guinea’s national flag draped around his shoulders and members of the military surrounding him. He said it was “the duty of a soldier to save the country.”

Guinea is no stranger to coups.

Before Mr. Condé became the country’s first democratically elected leader in 2010, there were two military takeovers, in 1984 and 2008.

After he assumed office, his government turned Guinea into a major exporter of bauxite, which is used to produce aluminum — but it came at a cost to some Guineans. Human rights groups say that mining companies have upended the lives and livelihoods of rural communities.

Colonel Doumbouya said he and his men had “seized” the president, and on Sunday, the United Nations secretary-general, António Guterres, calling for Mr. Condé’s release, said he was following the situation closely.

“I strongly condemn any takeover of the government by force of the gun,” he said on Twitter.

The president of the Economic Community of West African States also released a statement condemning the coup attempt, and threatening sanctions if the constitutional order was not restored.

Colonel Doumbouya said he was acting in response to the people’s will, and to confront poverty and endemic corruption.

“Guinea is beautiful,” he said near the end of his televised announcement, offering a brutal analogy: “We no longer need to rape her. We need to make love to her, that’s all.”

Borders — both land and air — were closed. The government and all its institutions were dissolved, Colonel Doumbouya said, and the Constitution would be rewritten in consultation with all Guineans.

People described a chaotic situation. A security guard at a pharmacy not far from the Samory Touré military camp was getting ready to go home after his overnight shift early Sunday morning when suddenly he heard gunshots ring out.

“We kept hearing shooting, all the time, with soldiers circulating around the city,” said the guard, Fode Camara. “I can still hear gunfire in the street. Everyone’s staying at home, because the soldiers prevent people from going out.”

On social media, videos circulated of Mr. Condé apparently under heavy guard, slouched on a sofa, his clothes in slight disarray.

Other videos showed Guineans taking to the streets in celebration and military vehicles moving through Conakry, accompanied by dozens of motorcycles, their riders raising fists in the air.

“It’s over! Guinea is free!” shouted one woman from her balcony overlooking one of Conakry’s biggest streets.

“It’s a shame, but it’s the consequence of bad governance,” said Hamidou Diallo, a banking and insurance student at a university in Conakry.

Alsény Kéita, a shopkeeper in Matoto, an area of Conakry, agreed.

“Alpha Condé was no longer managing this country,” he said. “His entourage has grown rich on the backs of the people. The military taking power is salvation for us who live day by day. The high cost of living is suffocating people.”

But some remembered the country’s past experience with coup plotters and feared what was to come.

“Military coups are not good for Guinea,” said Aissatou Diassy, a teacher. Drug trafficking and the embezzlement of public funds flourished under the rule of the former coup plotters Lansana Conté and Moussa Dadis Camara, she said, adding: “The military must organize a short transition.”

The election in Guinea last year was tense. Dozens of people died in clashes between supporters of the government and those of the opposition. Shortly before the election, Mr. Condé accused the opposition leader, Cellou Dalein Diallo, of trying to recruit mercenaries to attack Guinea. He closed the border, preventing many people living abroad from returning to cast their vote.

Colonel Doumbouya is a former member of the French Foreign Legion. According to videos posted online by Guinean news media, he received training at Flintlock, the U.S. military’s biggest annual exercise in Africa.

The name he gave to his junta was the National Committee of “Rassemblement” and Development — rassemblement being a word that can be translated in a number of ways, including “gathering,” “rallying,” and ‘reconciliation’.

“What was it that Jerry Rawlings said?” he asked in his lengthy statement on television, referring to the former president of Ghana, who took power in a coup and ruled first as a military leader, then as a democratically elected president. “If the people are crushed by their elites, it is up to the army to give the people their freedom.”