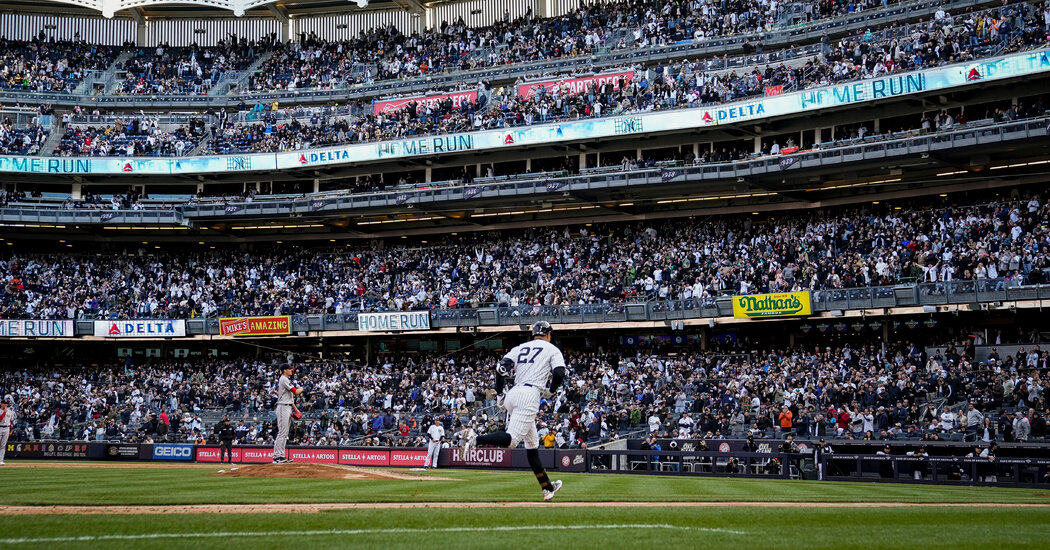 
Giancarlo Stanton became the first player to homer against Boston in six straight games, hitting a tiebreaking, two-run drive in the sixth inning that gave the Yankees a 4-2 win over the Red Sox on Saturday.

Anthony Rizzo homered for the second straight day to start the Yankees’ comeback from an early deficit, a tying two-run drive in the fourth.

Luis Severino made his first start for the Yankees since the 2019 American League Championship Series as the Yankees improved to 2-0 for the first time since 2018.

Stanton broke a 2-2 tie when he drove an 0-1 slider from Nick Pivetta (0-1) into the first row of the left field bleachers, a 437-foot drive over Boston’s bullpen. Stanton and Rizzo became the first players in Yankees history to homer together in both of a season’s first two games.

After opening as a designated hitter Friday, Stanton played right field. Stanton hit nine of 35 homers last year in 16 games as an outfielder.

Alex Verdugo hit a two-run homer in a 31-pitch second inning off Severino, who returned late last season from Tommy John surgery. The 28-year-old All-Star right-hander, a 19-game winner in 2018. allowed five hits in three-plus innings, struck out five and walked none. He threw 65 pitches, including 35 four-seam fastballs that averaged 97.8 miles per hour.

Six relievers followed Severino with an inning each of hitless relief. Lucas Luetge (1-0) pitched the sixth, and Aroldis Chapman worked around a throwing error by new shortstop Isiah Kiner-Falefa for his first save.

Boston dropped to 0-2 for the second straight season.

In a defensive highlight that got overshaded as a result of Boston’s defeat, Enrique Hernández made a leaping catch at the center field fence to rob Aaron Judge of an extra-base hit. Judge’s drive would have been a home run in 21 ballparks.

WASHINGTON — Pete Alonso twirled his bat when his first career grand slam broke a scoreless tie in the fifth inning, then put his index fingers to his mouth as if hushing the crowd after celebrating with teammates near the plate, propelling the Mets to a 5-0 victory over the Washington Nationals on Saturday night.

Chris Bassitt cruised through six innings in his Mets debut, and New York won its third straight to open Buck Showalter’s tenure as manager. The Mets have outscored Washington by 17-4 and will go for a series sweep Sunday.

About 48 hours removed from getting his lower lip bloodied by a pitch — part of a string of Mets who have been plunked during the season’s first three games, leading to a benches-clearing interruption Friday — Alonso sent a 91-mile-per-hour fastball from Joan Adon (0-1) over the fence in left on a 2-1 count.

The Mets loaded the bases with a single and a pair of walks against Adon, whose first big league appearance came on the last day of the 2021 regular season. That brought up Alonso, who hit 53 homers in 2019 as the N.L. Rookie of the Year, and a group of Mets fans near the visiting dugout sang a chorus of his full name.

He took a ball off the face in the ninth inning on opening day, after teammate James McCann had been hit twice earlier. Then Mets shortstop Francisco Lindor got beaned in Game 2, precipitating an on-field confrontation between both clubs and two ejections. A fifth hit-by-pitch came in the third inning Saturday, when Starling Marte was struck by Adon’s looping curveball — but this time, Showalter remained in his dugout, glaring with arms crossed.

A day after former Nationals starter Max Scherzer won his first start for New York, Bassitt — also an All-Star right-hander — did the same.

Bassitt (1-0), who arrived from the Oakland Athletics in a trade last month, gave up only three singles — just one of which left the infield — in six innings. He struck out eight and walked one.

The rebuilding Nationals drew a crowd of 21,369.