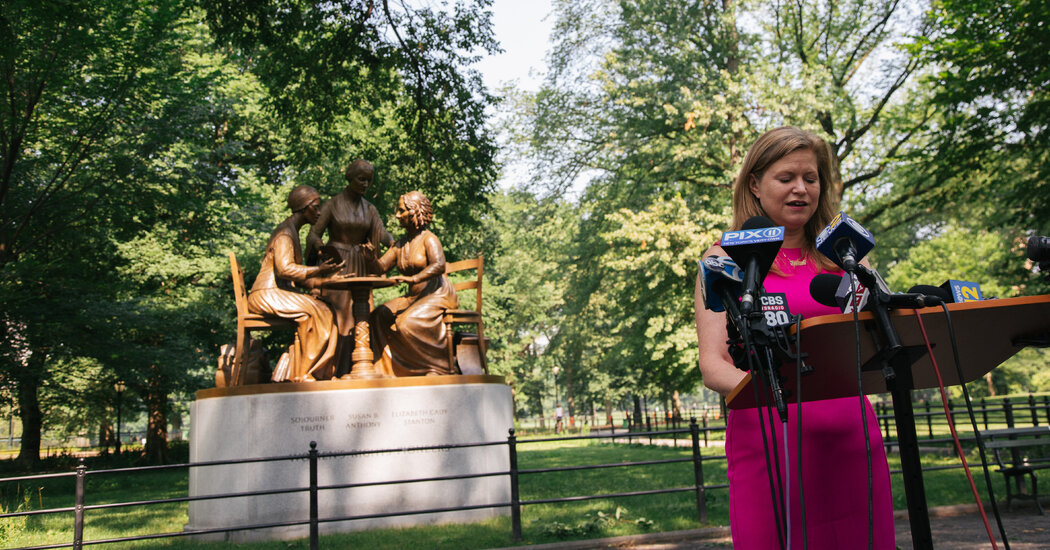 
Kathryn Garcia and Maya D. Wiley, who ran muscular campaigns to become the first female mayor of New York City, acknowledged on Wednesday that their bids had fallen short, conceding to Eric Adams in the Democratic primary.

“For 400 years, no woman has held the top seat at City Hall,” said Ms. Garcia, a former sanitation commissioner who trailed by one percentage point in Tuesday’s tally. “This campaign has come closer than any other moment in history to breaking that glass ceiling in selecting New York City’s first female mayor. We cracked the hell out of it, and it’s ready to be broken, but we have not cracked that glass ceiling.”

She spoke in front of the Women’s Rights Pioneers Monument in Central Park, a backdrop that Ms. Wiley had also used earlier in the campaign.

Ms. Garcia ran on her reputation for managerial competence, offering herself as a counterweight to Mayor Bill de Blasio, who developed a reputation as a sometimes hapless administrator. Her candidacy gained momentum after she was endorsed by The New York Times and The Daily News; a late alliance with a rival candidate, Andrew Yang, likely helped her draw second-place votes from his supporters.

A short while after Ms. Garcia’s concession speech, Ms. Wiley, who finished third, spoke outside the Lucerne Hotel on the Upper West Side of Manhattan.

“I stand here today, one, to congratulate Eric Adams on his victory,” said Ms. Wiley, who had allied herself with the homeless men fighting to stay at the Lucerne as it became a flash point over inequality during the pandemic.

Ms. Wiley, who often spoke emotionally about what it meant to connect with and inspire young Black girls on the campaign trail, acknowledged that Mr. Adams’s victory carried historical significance: If Mr. Adams, the Brooklyn borough president, wins the November general election, he will be New York City’s second Black mayor.

“That has tremendous meaning for so many New Yorkers, particularly Black and brown ones,” Ms. Wiley said.

She added that while both she and Ms. Garcia had failed to win the nomination, their campaigns still marked a significant stride forward for women across the city.

The concession speeches contrasted sharply with the sheer ebullience accompanying Mr. Adams’s Wednesday tour of the morning shows. He sought to cast himself as the new voice of working-class Democrats in America, a swath of voters he suggested had been neglected by the party elite for far too long.

“It’s extremely exciting right now that just an everyday blue-collar worker, I like to say, is going to potentially become the mayor of the City of New York,” Mr. Adams said on CNN.

Democrats outnumber Republicans by nearly seven to one in New York City, and as the Democratic nominee, Mr. Adams will be an overwhelming favorite against the Republican nominee, Curtis Sliwa, in the November general election.

Mr. Adams spent almost no time on Wednesday morning addressing the November election. When asked about Mr. Sliwa, the founder of the Guardian Angels, Mr. Adams swiftly dismissed him as a single-issue candidate focused on subway crime in a city facing a multitude of complicated issues. He also dismissed any notion that he would hire Ms. Garcia to serve in his administration, as Mr. Yang suggested he would when he was a front-runner.

Instead, Mr. Adams directed his attention to what his win over 12 other Democratic candidates for mayor might portend for his party.

He repeated his argument that low-income New Yorkers are too often ignored by Democrats who focus too much on the ideological debates that drive the conversation on Twitter.

“There’s a permanent group of people that are living in systemic poverty,” he said on CBS. “You and I, we go to the restaurant, we eat well, we take our Uber, but that’s not the reality for America and New York. And so when we turn this city around, we’re going to end those inequalities.”