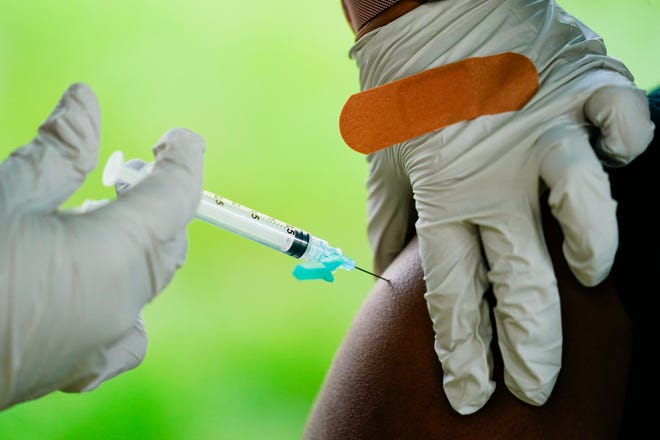 
Dr. Anthony Fauci on Sunday defended the Biden administration’s booster rollout plans, downplaying confusion over the initial target date and who should actually get the additional jabs.

“That was a plan that was always contingent, and every one of us said that, contingent upon the FDA’s normal regulatory process,” Fauci, who made the rounds of the Sunday morning news shows, said on NBC News’ “Meet the Press.”

President Joe Biden previously said boosters would be available to all this week. Fauci said Sunday that it was always up to the FDA with their advisers to determine “exactly what that rollout would look like.”

A key federal advisory committee on Friday recommended a third dose of the Pfizer-BioNTech COVID-19 vaccine six months after full vaccination for people 65 and older and those at high risk of severe COVID-19. There isn’t yet sufficient evidence to show boosters for people under 65 are necessary, said members of the Food and Drug Administration’s Vaccines and Related Biological Products Advisory Committee.

Dr. Francis Collins, director of the National Institutes of Health director, in an interview on “Fox News Sunday,” called the decision a preliminary step and predicts broader approval for most Americans “in the next few weeks.” Fauci agreed.

“I believe, as a scientist who’s been following it, that ultimately the real proper regimen will turn out to be the original two shots plus a boost,” Fauci said. “But you want to do that according to what the data tells you.”

‘Wasn’t so sure I was going to make it’:Alabama sheriff recovers from COVID-19, credits vaccine for recovery

Also in the news:

► Some South Carolina lawmakers from both parties are pushing for a special session to repeal a provision that effectively stopped most school mask mandates and replace it with a rule allowing local governments to make decisions based on their situations.

► The U.N. General Assembly is relying on a vaccine honor system for world leaders before they speak at next week’s meeting. Presidents, premiers, monarchs and other dignitaries won’t have to show vaccination cards or other proof of inoculation.

►Florida accounted for one out of every 25 COVID deaths in the world last week. The state recorded 2,468 COVID deaths in the week ending Friday, while 62,291 were reported globally. On  the upside, Florida reported 11,275 new daily cases on Friday –the state averaged more than 21,000 cases a day in August.

►Hundreds of health care and emergency services workers, teachers and state employees – who must to be vaccinated by Oct. 18 – protested at Oregon’s Capitol on Saturday against the requiremnet and mandatory mask rules.

►After showing signs of coughing, sneezing and a lack of appetite, nine lions and tigers at the Smithsonian Institution’s National Zoo in D.C. tested positive for COVID-19.

📈Today’s numbers: The U.S. has recorded more than 42 million confirmed COVID-19 cases and more than 673,400 deaths, according to Johns Hopkins University data. Global totals: More than 228.2 million cases and 4.6 million deaths. More than 181 million Americans – 54.5% of the population – have been fully vaccinated, according to the Centers for Disease Control and Prevention.

📘What we’re reading: The federal government ended its enhanced unemployment and Supplemental Nutrition Assistance Program payments last week – the largest cutoff of federal benefits in U.S. history. It helped millions ride out the pandemic, who are now struggling amid a lagging economic recovery. Read the full story.

Keep refreshing this page for the latest news. Want more? Sign up for USA TODAY’s Coronavirus Watch newsletter to receive updates directly to your inbox and join our Facebook group.

Mississippi Gov. Tate Reeves on Sunday defended his state’s dubious pandemic record while blasting President Biden’s vaccine mandates as an attack on “hard-working Americans.” Biden is requiring all private employers with 100 or more employees to mandate vaccines or weekly testing while also dramatically expanding vaccination requirements for health workers. Reeves, speaking on  CNN’s “State of the Union,” adamantly opposed the edicts despite Mississippi leading the nation in COVID-19 deaths per capita.

“The question here is not about what we do in Mississippi, it’s about what this president is trying to impose on the American worker,” Reeves said.

For the first time in its documented history, the state of Alabama recorded more deaths than births in a year, and state health officials are attributing the 2020 population shrinkage to COVID-19. The state had 64,714 total deaths and 57,641 total births last year, he said. There were 7,182 deaths from COVID-19 in 2020, according to state health data.

The Biden administration has turned to funds from the American Rescue Plan, approved by Congress in March, as one of its top strategies not only to combat rising crime in cities but to push back at attacks from Republicans seeking to tie Biden to the calls of progressive activists to “defund the police.” As gun violence has soared amid the pandemic, Republicans have blamed Democratic leadership in cities.

Biden and Democrats have touted the American Rescue Plan’s funding for cities and states, noting that no Republican members of Congress voted for the $1.9 trillion package. But Philadelphia Mayor Jim Kenney, a Democrat, warns that hiring police with that money “is not sustainable.”

Tennessee may soon face a shortage of critical drugs used to combat the coronavirus after the federal government capped shipments because a few Southern states gobbled up most of the national supply.

Monoclonal antibody drugs are given to COVID-19 patients, most of whom are unvaccinated, so their illnesses do not become severe enough for hospitalization. Infusion treatment is offered at more than 200 Tennessee locations and have been widely promoted by Gov. Bill Lee and some other Southern governors.

The federal government informed Tennessee and other Southern states this week that it will begin limiting the amount of monoclonal antibody drugs available to individual states because of surging demand.

To avoid ‘twindemic,’ experts say now is the time to get flu shot

With flu season around the corner and the danger of a “twindemic” – a deadly combination of COVID-19 and the flu spreading at the same time – experts are recommending Americans get a flu shot.

“In these pandemic times, we want to save health care resources and not burden the healthcare workers with something that is easily preventable. We want to minimize hospitalization. We want to minimize deaths,” said Linda Molaka, a CVS pharmacy manager based in Pembroke Pines, Florida.

Everything to know about flu shots:Read more from pharmacists on COVID boosters and flu shots