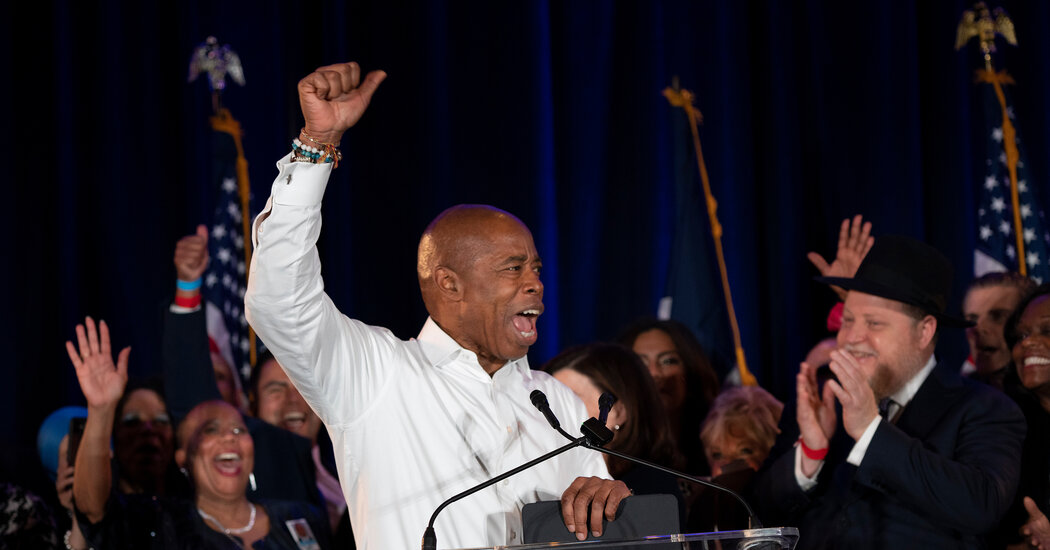 Eric Adams Vows to ‘Get Stuff Done.’ But First, a Night on the Town.

But first, Mr. Adams will fly to Puerto Rico this week for a prominent gathering of New York elected officials and lobbyists staged by a nonprofit known as Somos. Then he will visit the Dominican Republic.

Takeaways From the 2021 Elections

Democratic panic is rising. Less than a year after taking power in Washington, the party faces a grim immediate future as it struggles to energize voters and continues to lose messaging wars to Republicans.

Mr. Adams, who promoted himself as a blue-collar New Yorker, was criticized by his Republican opponent, Curtis Sliwa, for spending time in Monaco and for fund-raising in the Hamptons and Martha’s Vineyard. He has also faced questions during the campaign over transparency, where he lives, and his financial dealings.

During his victory speech, Mr. Adams hinted at his flaws, but said that he would work hard to move the city in a new direction.

“You’re going to find some blemishes,” he said. “Because I’m perfectly imperfect.”

Mr. Adams will also clearly offer a different style than Mr. de Blasio, who was not known to delight in the city’s cultural events. After his victory party on Tuesday night, Mr. Adams left for an exclusive soiree at Zero Bond, a private club in downtown Manhattan, with celebrities like the comedian Chris Rock, the actor Forest Whitaker and the rapper Ja Rule and business leaders like Eric Schmidt, the former chief executive of Google, and James Dolan, the owner of the Knicks and Madison Square Garden.

He defended his partying on Wednesday, saying that he was trying to promote the city’s nightlife and calling himself a “nocturnal creature.”

Inside the club on Tuesday night, Mr. Adams, who wore a snazzy blue blazer, was accompanied by his son, Jordan, and the Brooklyn power broker Frank Carone. He gave a seven-minute speech and then moved around the room, taking photos with the guests. Burgers and cheese balls were served, but Mr. Adams stuck to his vegan diet when he finally sat down to eat.

“They brought him broccoli, and they served it at the table for him,” said Corey Johnson, the City Council speaker, who walked out of the event just before 1 a.m. “Everyone was being a carnivore except Eric Adams.”