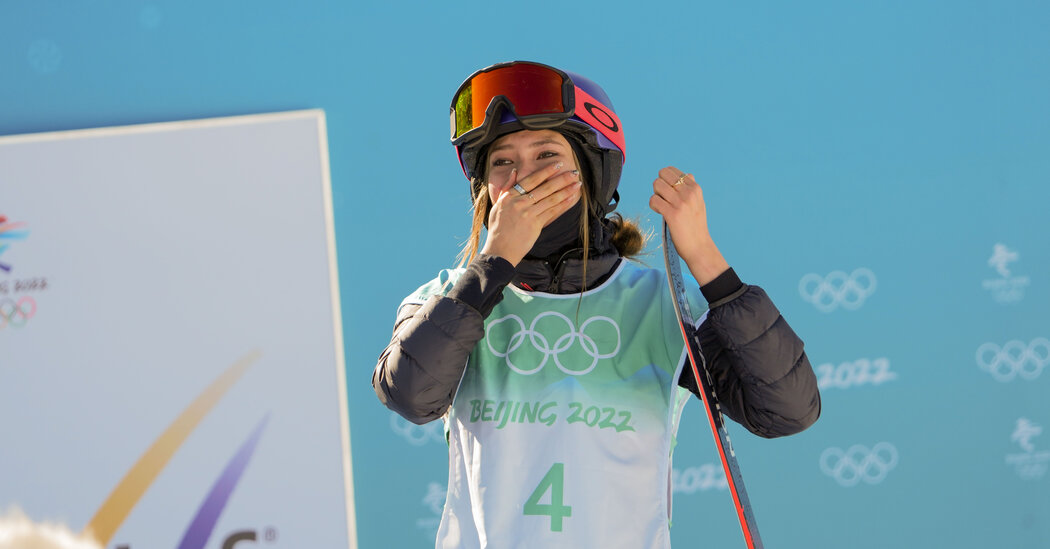 
BEIJING — Eileen Gu needed the best jump of her life to win a gold medal. The 18-year-old from California had come to her mother’s home country, hoping to win three events at the Winter Olympics while representing China.

Under the glare of a bright sun and the eyes of international media, Gu stood on top of the massive, modern big air jump, set in an industrial park amid concrete cooling towers. She was in third place with one jump to go.

Her mother called. Yan Gu, who grew up in Beijing, was at the bottom of the jump, trying to give her daughter advice.

Do the 1440 again, she told her, referring to a four-rotation trick that Gu had landed nearly perfectly already. Maybe it lifts you to a silver medal. Gu had other ideas.

“Mom, executive call here,” she recalled saying. “Vetoed. I am going to make the 16, and you are going to deal with it.”

Gu landed the trick, officially a Left Double 1620 with a safety grab, and earned enough points to vault her into first. When France’s Tess Ledeux could not match the score, Gu had gold and Ledeux got silver. Switzerland’s Mathilde Gremaud won bronze.

As Gu waited for her results, Thomas Bach, president of the International Olympic Committee, congratulated her at the finish. When the numbers came in, fans in the grandstands cheered for Gu and waved small Chinese flags.

Born and raised in California but competing for China, Gu has attracted international attention — and some debate — for her decision in 2019 to represent her mother’s homeland.

The decision was barely noted when she was 15 and the Olympics were nearly three years away. Now Gu dominates her sport and finds herself straddling a growing geopolitical rift between her two countries.

Yan Gu, Eileen’s mother, was born in Shanghai and raised in Beijing, the daughter of a government engineer. She emigrated to the United States about 30 years ago for postgraduate studies and settled in San Francisco.

Eileen Gu, raised by her mother in an upscale San Francisco neighborhood, has become a model, representing luxury brands like Louis Vuitton and Tiffany & Company. She has so many sponsorships in China that she is a ubiquitous presence in advertisements and receives glowing news coverage from state media.

Gu has said that she wants to be a bridge between the United States and China while inspiring young women and helping China’s nascent winter-sports industry to grow. She and her mother have declined to discuss any of the thorny geopolitical issues that involve the rival countries.

After winning the gold medal on Tuesday, Gu was asked at least six times about whether she still holds U.S. citizenship. China does not allow dual citizenship. She deftly talked about the support she has received from both countries, about how she feels Chinese when in China and American when in the United States, and never answered the question.

She spent two hours doing interviews after her victory, and spun past anyone who might criticize her.

“No matter what I say, if people don’t have a good heart, they won’t believe me because they can’t empathize with people who do have a good heart,” she said. “So in that sense, I feel as though it’s a lot easier to block out the hate now. And also, they’re never going to know what it feels like to win an Olympic gold medal.”

There were 12 freestyle skiers in the women’s final of big air at Shougang Park, but the focus was mostly almost entirely on Gu. Athletes each had three jumps, judged on a 100-point scale. The best two scores were added together to determine the winner.

Gu opened with a “right double 1440 safety,” scoring 93.75 and putting her into first place. Her lead didn’t last long.

Ledeux landed a 1620 — an extra half rotation from what Gu performed — to earn a score of 94.5. Gu and Ledeux traded big tricks in the second round, and Gu headed to her last jump needing at least 93 points to leap from third to first.

That is when Gu decided in the call with her mother that she would try to spin her bronze, already secured, into gold.

Her celebration plan was to eat some Ghirardelli chocolate (made in San Francisco), play some piano, write in her journal and relax.

Practice for the slopestyle competition was scheduled for the next day. There were more medals and hearts to win, and maybe more questions to handle.