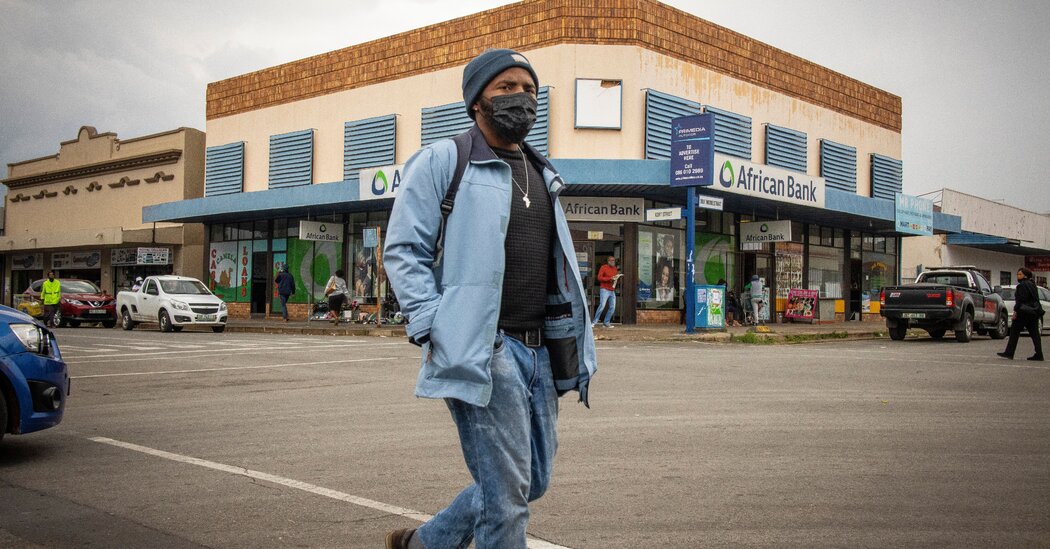 
An increasing number of countries — including Britain, France, Israel, Italy and Singapore — were moving on Friday to restrict travel from South Africa and other countries in the region, a day after South African authorities identified a concerning new coronavirus variant with mutations that one scientist said marked a “big jump in evolution.”

In the past, governments have taken days, weeks or months to issue travel restrictions in response to new variants. This time, restrictions came within hours of South Africa’s announcement — and hours before health officials from the country were scheduled to discuss the variant with the World Health Organization.

“While no cases have been detected so far on French territory, the principle of maximum precaution must apply,” Jean Castex, France’s prime minister, said in a statement, adding that anyone in France who had recently traveled to those countries should get tested and identify themselves to the authorities.

The governments of Croatia, Italy, Malta, the Netherlands, Japan and Singapore announced on Friday that they would impose similar restrictions. Markets were down in Japan in response to the variant’s discovery, and officials in Australia and in New Zealand said that they were monitoring it closely.

“Our scientists are at work to study the new B.1.1.529 variant,” Italy’s health minister, Roberto Speranza, said in a statement, using the variant’s scientific name. “Meanwhile we err on the side of caution.”

Ursula von der Leyen, the president of the European Union’s executive arm, also said in a Twitter post on Friday morning that it would propose restricting air travel to European countries from southern Africa because of concerns about the variant.

The @EU_Commission will propose, in close coordination with Member States, to activate the emergency brake to stop air travel from the southern African region due to the variant of concern B.1.1.529.

In the past two days, scientists detected the variant after observing an increase in infections in South Africa’s economic hub surrounding Johannesburg. So far only a few dozen cases have been identified in South Africa, Hong Kong, Israel and Botswana.

A number of variants have emerged since the onset of the pandemic. One underlying concern about them is whether they will stymie the fight against the virus or limit the effectiveness of vaccines. South African scientists will meet with the World Health Organization technical team on Friday to discuss the new variant, and the authorities will assign it a letter of the Greek alphabet.

In a statement posted on Friday on a government website, South Africa said it would urge Britain to reconsider its travel restrictions, saying: “The U.K.’s decision to temporarily ban South Africans from entering the U.K. seems to have been rushed, as even the World Health Organization is yet to advise on the next steps.”

In December last year, South Africa was the first nation to report the appearance of the Beta variant, which has now spread to nearly 70 countries. Scientists have been concerned that some clinical trials have shown that vaccines offer less protection against the Beta variant. Since then, the more virulent and aggressive Delta variant has spread all over the world and is believed to be fueling the latest surge in cases.

With over 1,200 new infections, South Africa’s daily infection rate is much lower than that in Germany, where new cases are driving a wave. However, the density of mutations on this new variant raises fears that it could be highly contagious, leading scientists to sound the alarm early.

“This variant did surprise us — it has a big jump in evolution, many more mutations than we expected, especially after a very severe third wave of Delta,” said Tulio de Oliveira, director of the KwaZulu-Natal Research and Innovation Sequencing Platform.

Scientists are still unclear on how effective vaccines will be against the new variant flagged by a team in South Africa, which displays mutations that might resist neutralization. Only several dozen cases have been fully identified so far in South Africa, Botswana, Hong Kong and Israel.

The new variant, B.1.1.529, has a “very unusual constellation of mutations,” with more than 30 in the spike protein alone, according to Tulio de Oliveira, director of the KwaZulu-Natal Research and Innovation Sequencing Platform.

On the ACE2 receptor — the protein that helps to create an entry point for the coronavirus to infect human cells — the new variant has 10 mutations. In comparison, the Beta variant has three and the Delta variant two, Mr. de Oliveira said.

The variant shares similarities with the Lambda and Beta variants, which are associated with an innate evasion of immunity, said Richard Lessells, an infectious diseases specialist at the KwaZulu-Natal Research and Innovation Sequencing Platform.

“All these things are what give us some concern that this variant might have not just enhanced transmissibility, so spread more efficiently, but might also be able to get around parts of the immune system and the protection we have in our immune system,” Dr. Lessells said.

The new variant has largely been detected among young people, the cohort that also has the lowest vaccination rate in South Africa. Just over a quarter of those ages between 18 and 34 in South Africa are vaccinated, said Dr. Joe Phaahla, the country’s minister of health.

While cases of the variant are mainly concentrated in the country’s economic hub, particularly in the country’s administrative capital, Pretoria, it is “only a matter of time” before the virus spreads across the country as schools close and families prepare to travel for the holiday season, Dr. Phaahla said.

The Hong Kong government said on Thursday that it had detected two cases of a new variant identified in South Africa, which scientists have warned shows a “big jump in evolution” and could limit the effectiveness of vaccines.

The infections were detected in a man who had returned to Hong Kong from South Africa this month, and later in another man staying across the hall in the same quarantine hotel. (Hong Kong requires almost all overseas arrivals to quarantine in hotels for two to three weeks.) The virus’s genetic sequence was identical in both men, suggesting airborne transmission, according to the city’s Center for Health Protection. Both men were vaccinated.

Further sequencing by the University of Hong Kong confirmed that the viruses belonged to the new variant from South Africa, officials said, though they acknowledged that information about the variant’s public health impact was “lacking at the moment.”

Some Hong Kong experts have questioned the length and efficacy of Hong Kong’s quarantines, noting that officials have recorded several cases of residents in quarantine hotels apparently infecting people who were staying in other rooms.

In the case of the latest variant infections, the government has blamed the first man for not wearing a surgical mask when opening his hotel room door, as well as “unsatisfactory air flow” in the hotel. As of Friday afternoon there had been no reports of infections in nearby rooms.

The presence of the new variant may complicate efforts to reopen the border between Hong Kong and mainland China. For months, Hong Kong officials have said that resuming quarantine-free travel between the Chinese territory and the mainland — virtually the only places in the world still pursuing a containment strategy that seeks full eradication of the virus — is their top priority, even though the strategy has damaged the city’s reputation as a global finance hub.

Mainland officials have said that Hong Kong is not doing enough to control the virus, even though the city has recorded just two locally transmitted cases in the last six months. The mainland has recently faced new domestic outbreaks; on Thursday, the National Health Commission there reported four new local cases.

On Thursday evening, Hong Kong’s No. 2 official, John Lee, said mainland officials had told him earlier in the day that Hong Kong had “basically fulfilled” the conditions to reopen the border. He said details would still need to be worked out, including the introduction of a mainland-style “health code” app that has raised privacy concerns.

Asked by a reporter whether the new variant would delay reopening with the mainland, Mr. Lee said only that the Hong Kong authorities would “ensure that adequate research and tracking are done in this regard.”

“Of course, we must manage and control any new risks,” he said.

Nearly 20 months after pandemic lockdowns first began, governments across Europe are beginning to tighten restrictions again amid the latest wave of new coronavirus cases, threatening the gains that the region has made against the pandemic.

France is racing to offer booster shots to all adults and will not renew health passes for those who refuse. Deaths are rising in Germany, with its 68 percent vaccination rate, a worrying trend for a highly inoculated country. Austria has been in a nationwide lockdown since Monday, and made vaccinations mandatory.

In Eastern Europe, where far-right and populist groups have fueled vaccine skepticism, vaccination rates are lower than the rest of the continent. Bulgaria, where a quarter of the population is fully vaccinated, is turning back to shutdowns or other restrictive measures.

“Time and again, we’ve seen how the infection dynamics in Europe are mirrored here several weeks later,” Carissa F. Etienne, director of the Pan American Health Organization, told reporters on Wednesday. “The future is unfolding before us, and it must be a wake-up call for our region because we are even more vulnerable.”

The White House insists that while new infections are on the rise, the United States can avoid European-style lockdowns.

“We are not headed in that direction,” Jeff Zients, the White House coronavirus response coordinator, said this week. “We have the tools to accelerate the path out of this pandemic: widely available vaccinations, booster shots, kids’ shots, therapeutics.”

But the chief of the World Health Organization, Tedros Adhanom Ghebreyesus, said that some countries had lapsed into a “false sense of security.”

He issued a warning during a news briefing on Wednesday: “While Europe is again the epicenter of the pandemic, no country or region is out of the woods.”