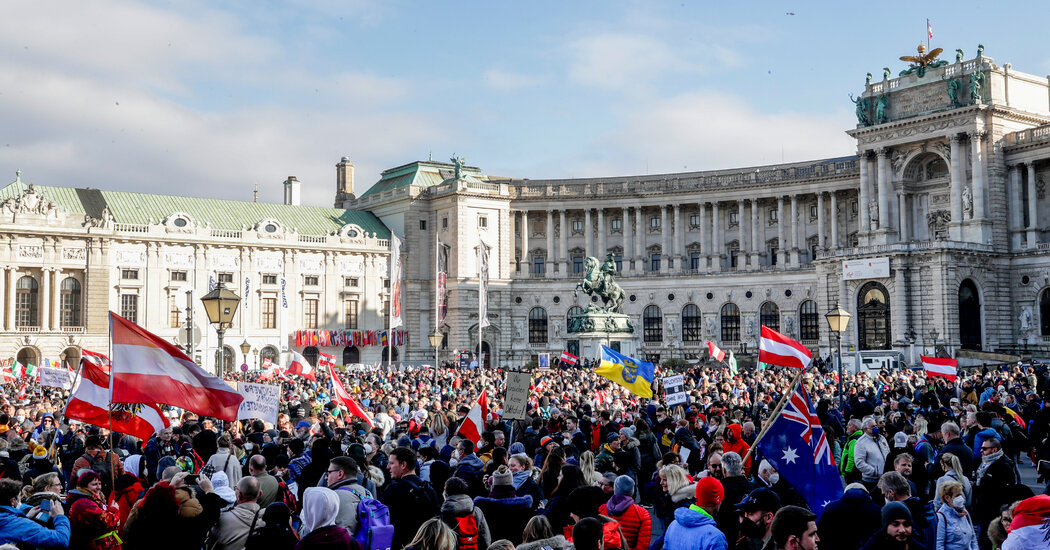 VIENNA — Austria entered a nationwide lockdown on Monday, as Europe experiences a menacing fourth wave of the coronavirus, with soaring rates of infection.

The lockdown, in which people are allowed to leave their homes only to go to work or to procure groceries or medicines, will last at least 10 days and as many as 20 and comes after months of struggling attempts to halt the contagion through widespread testing and partial restrictions.

While Austria may be the first European country to respond with a lockdown, it may not be the last. That prospect, along with increasingly stringent vaccine mandates, has set off a backlash in Austria and elsewhere, with mass demonstrations in Vienna, Brussels and the Dutch city of Rotterdam over the weekend, sometimes punctuated with violent outbreaks.

The new Covid wave is being driven by widespread resistance to vaccines and the growing prevalence of vaccine and mask mandates. Austrian officials have said they will enforce a nationwide vaccine mandate in February, the first European nation to do so.

Austria, where 66 percent of the population is vaccinated, reported more than 14,000 new cases of the virus within 24 hours on Sunday. Over the past week the Netherlands has been averaging more than 20,000, while Germany has seen roughly double that number.

The opposition to the lockdown and vaccine mandates in Austria is being fueled in part by the far-right Freedom Party, which has used its platform in the Austrian Parliament to spread doubt about the effectiveness of the vaccines and to promote ivermectin, a drug typically used to treat parasitic worms that has repeatedly failed against the coronavirus in clinical trials.

But the fury is not limited to far-right activists, as the throngs that filled Vienna’s streets on Saturday attested. The police estimated the crowd at 40,000, with many families and others far outnumbering the right-wing extremists.

Who should get Covid-19 vaccine boosters? That depends on the public health goal, said Dr. Scott Gottlieb, the former commissioner of the Food and Drug Administration.

On Friday, the F.D.A. endorsed Moderna and Pfizer-BioNTech vaccine boosters for all adults, but did not require that people have boosters to be considered fully vaccinated.

The Centers for Disease Control and Prevention agreed with the F.D.A. later on Friday and currently advises that those 50 years and older, or adult residents in long-term care, “should” get a Moderna or Pfizer booster, while other adults “may” get one. The agency also advises that all adults who received the Johnson & Johnson shot should get boosted.

Speaking Sunday on the CBS show “Face the Nation” about the current recommendations, Dr. Gottlieb, a Pfizer board member, said that there are two views about the goal of boosters: If vaccines are meant to protect people from severe Covid infections, they should be recommended for people over 50. Immunity from vaccines wanes in older people after six months, placing them at increased risk for a serious infection and, Dr. Gottlieb said, “a bad outcome.”

But, he added, if the goal of boosters is to slow or stop transmission of the coronavirus, they should be recommended for younger people. Boosters may not help those individuals avoid severe disease because their immunity is already good, Dr. Gottlieb said, but they can prevent younger people from infecting others.

“You’re recommending the booster as a tool to try to make them less likely to pass on the virus,” he explained.

That sort of strategy is not new to the infectious disease world. Boys are immunized against rubella, or German measles. But the goal is not to protect them — the disease is mild in children. Instead, it is to prevent boys from spreading the virus to pregnant women — rubella can cause severe birth defects.

Girls, too, are immunized against rubella to prevent them from spreading the virus, but also to protect their fetuses when they are older, if they become pregnant.

For now, the booster situation is unsettled, and recommendations can vary state to state. Only the governors of Connecticut and New Mexico have said that, to be fully vaccinated, everyone needs three doses of a Covid vaccine. Dr. Gottlieb said he did not think the C.D.C. would recommend that everyone get three doses any time soon because of the debate among public health experts over the goal of vaccination.

He added, “the C.D.C.’s sort of stuttering approach to how they’ve embraced boosters is sort of reflective of that debate.”

A month ago, new coronavirus cases in the United States were ticking steadily downward and the worst of a miserable summer surge fueled by the Delta variant appeared to be over. But as Americans travel this week to meet far-flung relatives for Thanksgiving dinner, new virus cases are rising once more, especially in the Upper Midwest and Northeast.

Federal medical teams have been dispatched to Minnesota to help at overwhelmed hospitals. Michigan is enduring its worst case surge yet, with daily caseloads doubling since the start of November. Even New England, where vaccination rates are high, is struggling, with Vermont, Maine and New Hampshire trying to contain major outbreaks.

Nationally, case levels remain well below those seen in early September, when summer infections peaked, and are below those seen last Thanksgiving. But conditions are worsening rapidly, and this will not be the post-pandemic Thanksgiving that Americans had hoped for. More than 90,000 cases are being reported each day, comparable to early August, and more than 30 states are seeing sustained upticks in infections. In the hardest-hit places, hospitalizations are already climbing.

“This thing is no longer just throwing curveballs at us — it’s throwing 210-mile-an-hour curveballs at us,” said Michael Osterholm, an epidemiologist at the University of Minnesota. He said that the virus had repeatedly defied predictions and continues to do so.

The new rise in cases comes at a complicated moment. Last Thanksgiving, before vaccines were available, federal and local officials had firmly urged Americans to forgo holiday gatherings. But in sharp contrast, public health officials, including Dr. Anthony S. Fauci, the nation’s leading infectious-disease expert, have mostly suggested this year that vaccinated people could gather in relative safety.

Australia, 20 months after shutting its borders, will allow skilled workers and international students to enter the country next month, the government announced on Monday.

The move comes as the Australian government, faced with a severe labor shortage, turns its focus to economic recovery, with 72 percent of the country fully vaccinated.

The new rules go into effect on Dec. 1, when some categories of visa holders, including skilled workers, international students, and those on working holiday and prospective marriage visas, will be allowed to enter Australia for the first time since the start of the pandemic. Over 200,000 people will fall into those categories.

“The return of skilled workers and students to Australia is a major milestone in our pathway back,” Prime Minister Scott Morrison said on Monday at a news conference. “The steps that we are taking today are about securing our economic recovery.”

At the start of the pandemic, Australia shut its borders to noncitizens, leaving hundreds of thousands of visa holders stranded outside the country and contributing to a significant worker shortage. Australia has relied on temporary workers for many industries, such as hospitality and agriculture. The travel restrictions also created a severe funding shortfall for universities.

Most tourists are still barred from traveling to Australia, except those from Singapore, South Korea and Japan, all countries that have established travel bubbles with Australia.

Visitors entering Australia will need to be fully vaccinated and return a negative PRC test within three days of boarding their flight. Upon arrival, they will need to follow some quarantine restrictions, depending on the state in which they arrive.

On Sunday, the first planes from Singapore arrived in Sydney and Melbourne under the new travel bubble arrangement, bringing the first tourists into the country since the start of the pandemic.

Disney has put on pause a coronavirus vaccine mandate for employees of its Florida theme park after the State Legislature and the governor made it illegal for employers to require all workers get the shots, a company spokesperson confirmed Saturday.

Walt Disney World could have been facing fines under the policy now on hold, illustrating how even one of the most iconic tourism brands in the state has to deal with the headwinds of political debate over the pandemic response.

Source: State and local health agencies. Daily cases are the number of new cases reported each day. The seven-day average is the average of a day and the previous six days of data.

The Republican-controlled Florida Legislature delivered the bill blocking Covid-19 vaccine mandates on Wednesday and Gov. Ron DeSantis signed it into law on Thursday, casting the measures as an effort to protect workers who could lose their jobs for lack of compliance.

Governor DeSantis, also a Republican, has been at the forefront of the political fight to curtail mask and vaccine mandates, saying the push against those restrictions counters overreach from the federal government. “Nobody should lose their job due to heavy-handed Covid mandates, and we had a responsibility to protect the livelihoods of the people of Florida,” the governor said in a statement.

The Biden administration has ordered vaccinations for workers in large companies and members of the federal work force, but the effort has met resistance across the country. Florida is among states that have challenged federal mandates in court.

The new Florida law prohibits employers from enforcing strict vaccine mandates, allowing employees to choose exemptions that include health or religious concerns, pregnancy or anticipated pregnancy, and having had the virus and recovered from it. Unvaccinated workers could instead undergo periodic testing or wear protective equipment, at the employers’ cost. Fines for violation could cost $10,000 a day per employee violation for businesses with fewer than 99 employees or up to $50,000 per employee violation for larger businesses.

Government entities and school districts are also restricted by the Covid mandate ban.

Disney World previously struck a deal with employees to require theme park workers be fully vaccinated against Covid to keep their jobs, and the company defended that rule in a statement Saturday. “We believe that our approach to mandatory vaccines has been the right one as we’ve continued to focus on the safety and well-being of our cast members and guests,” the statement said in part.

More than 90 percent of active cast members in Florida had verified they were vaccinated, the company said, before it sent a memo to employees halting the mandate.

Walt Disney’s website tells visitors it has been “very intentional and gradual” in operating safely, recommending guests exercise caution: wearing face coverings, checking for symptoms and getting the shots. “We encourage people to get vaccinated,” it says.

Todd Gregory contributed to this report.