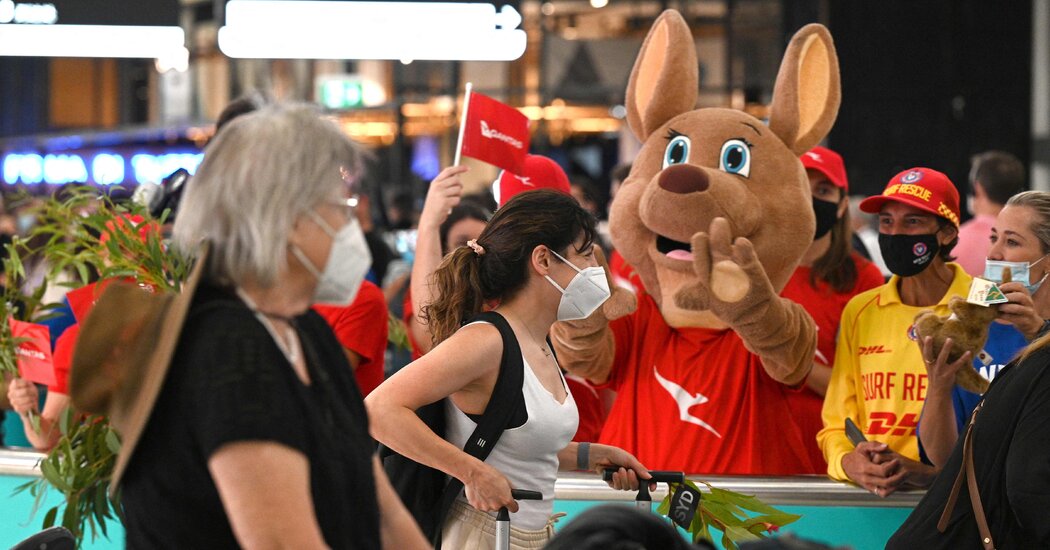 
Travelers arriving at the international airport in Sydney on Monday were greeted by lifeguards, drag queens, and a D.J. blasting local hits, as Australia reopened its borders to international visitors after nearly two years of shutting itself off from the rest of the world to try to keep the coronavirus at bay.

The country closed its international borders in March 2020 as part of its pandemic response, stranding citizens overseas and separating loved ones. Although the government gradually eased the harsh restrictions late last year — first loosening quarantine requirements for citizens, then allowing international students and some visa holders to return — tourists had remained banned and some residents continued to be cut off from friends and family.

Over 50 international flights were scheduled to land in Australia on Monday from countries including the United States, Britain, Singapore, and the United Arab Emirates. In Sydney, the first visitors arrived from Los Angeles just after 6 a.m., with travelers gifted koala stuffed toys and jars of Vegemite, a classic condiment spread, upon landing.

“It’s been a party out here at Sydney airport; everyone is celebrating,” Dan Tehan, the minister for tourism, said at a news conference at the airport on Monday morning. “It’s been quite extraordinary to see the way that people have been reunited — the hugs, the tears.”

Australia’s reopening comes as other countries in Asia also loosen restrictions even as the Omicron wave continues to roil the region. Last week, Japan announced that it would ease its border restrictions to allow more international students and visa holders to enter the country starting in March. And South Korea, which has recently been reporting more than 100,000 new cases a day, has started to ask people who test positive for the coronavirus to look after themselves at home, so the country can redirect resources to the most vulnerable.

Potential travelers and tourism operators alike are cautiously optimistic about the reopening of “Fortress Australia,” but many wonder if the isolated nation’s Covid restrictions — such as vaccine and testing requirements, as well as mask mandates — will make the return of international travel more of a trickle than a splash.

Travelers must show proof of vaccination to enter Australia without having to quarantine in a hotel, and they must provide a negative coronavirus test that was taken within 24 hours of departure. Unvaccinated travelers must obtain an exemption from the country’s authorities to be allowed entry and must quarantine upon arrival.

Mr. Tehan brushed off concerns that Australia’s reputation for adhering to strict safety measures during the pandemic — at odds with the inviting, easygoing nature portrayed by the country’s tourism boards — may also keep travelers away. “People view Australia like they’ve always viewed Australia,” he said, “warm, welcoming, with the best, best attractions and the best locations you can go anywhere in the world.”

It’s unclear how long it will take the tourism industry to rebound. Questions remain over whether travelers from China, Australia’s biggest tourism market, will return. And the U.S. and New Zealand have recommended against traveling to Australia because of its Omicron outbreak. In January, Australia recorded its highest ever average of cases, while February has been the month with its highest average deaths.

Margy Osmond, the chief executive of the industry group Tourism and Transport Forum Australia, said that tourism operators were starting to see an increase “in bookings for the second half of this year.”

But the flights on Monday were the first steps on the road back. Clearly, she said, it “is going to take us a little time to get to the numbers pre-pandemic, but this is the beginning. This is the start.”