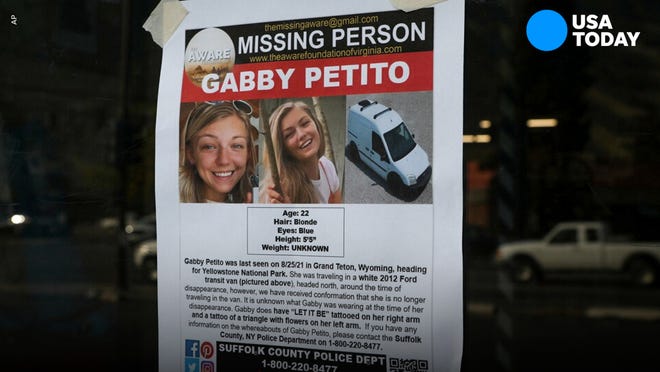 
The Wyoming medical examiner who performed the autopsy on 22-year-old Gabby Petito has scheduled a news conference later Tuesday to discuss his findings.

Teton County Coroner Dr. Brent Blue ruled Petito’s death a homicide but has provided little other information. Her disappearance and subsequent discovery of her body last month fueled intense interest across the nation and spurred a search for her missing fiance, Brian Laundrie.

Petito had been on a cross-country road trip with Laundrie, occasionally posting happy social media photos and stories along the way. But police video soon emerged of problems between them, and officers at one point separated them for a night after a domestic dispute had turned physical.

Laundrie was last seen a few days before Petito’s body was found. He had told his parents he was going hiking in the Carlton Reserve, a sprawling wilderness and wetland area near the Florida home that Laundrie and Petito shared with his parents in North Port. His disappearance prompted a massive, weeks-long search.

Memorial to Petito taken down

A makeshift memorial honoring Petito in North Port was taken down Tuesday. The memorial outside City Hall “has been a shining example” of support for the family, but the mementos have become damaged in the weather, the city said in a statement. The items will be given to the Petito family, and officials area working on plans for a donated, permanent memorial.

“Those looking to pay their respects may also want to consider supporting the Gabby Petito Foundation to help parents locate missing children,” the statement said. “Thank you for your understanding in this sensitive and important issue.”

Who were Petito and Laundrie?

The two were high school sweethearts from New York’s Long Island. Laundrie’s parents later moved to North Port, Florida, 35 miles southeast of Sarasota, and the young couple later moved in with his parents.

They left from Long Island in July on a months-long tour of national parks and other sites, bound for Oregon. Laundrie returned to Florida alone Sept. 1, and 10 days later, Petito’s parents filed a missing persons report after not hearing from her since late August. Petito’s body was Sept. 19 near a Wyoming campground.

‘Get us out of this horrible mess’:Brian Laundrie’s sister asks him to turn himself in

Friction between Laundrie and Petito

In Utah, the Grand County sheriff’s office released a 911 call from Aug. 12 in which the caller says he drove by the couple’s van and witnessed that “the gentleman was slapping the girl.”

Body camera video showed Petito in tears during a police stop on the side of a highway near Arches National Park in Utah. The footage shows a police officer speaking with Laundrie, who said friction had been building between the two for several days, though authorities at the scene took no action other than telling the couple to separate for the night.

The search for Brian Laundrie

Authorities used drones, scent-sniffing dogs and all-terrain vehicles, and investigators took some of his clothing from his parents’ home to provide a scent for the search dogs. TV personality Duane Lee Chapman, known as “Dog the Bounty Hunter,” was among the searchers and has promised to nab Laundrie before his 24th birthday on Nov. 18.

North Port police have described the Carlton Reserve as “vast and unforgiving” leaving “dangerous work for the search crews as they are wading through gator- and snake-infested swamps and flooded hiking and biking trails.”

Local survival expert Mark Burrow said black bears, coyotes, bobcats, panthers and clouds of gnawing insects also populate the reserve. Everything is wet, almost nothing is edible, and safe drinking water is nowhere to be found, he said.

“If he’s down there in the Carlton Reserve, he’s living in hell,” Burrow previously said.

Laundrie’s sister pleads for brother to turn himself in

Authorities have said that neither Laundrie nor his family members cooperated with the effort to find Petito in the days after she was reported missing. Now Laundrie’s family is seeking help in his disappearance. In an interview last week, Laundrie’s sister, Cassie Laundrie, said she does not know where he is.

“I’d turn him in,” she told ABC News in an interview that aired last week. “I worry about him. I hope he’s OK, and then I am angry and don’t know what to think. I would tell my brother to just come forward and get us out of this horrible mess.’

Cassie Laundrie said she has tried contacting Brian Laundrie since his disappearance, but phone calls went to voicemail. She said she last saw him Sept. 6 during a family camping trip.

Laundrie faces charges, but not in Petito’s death

Laundrie refused to talk to law enforcement during the search for Petito, and he disappeared before her body was found. He has not been charged in her death, but he does face charges of unauthorized use of a debit card and several accounts involving more than $1,000. The documents do not state who the cards or accounts belong to.

The indictment also charges Laundrie with unauthorized access of a device and says he used the bank accounts without permission from about Aug. 30 through Sept. 1.

Do you know where they are? 43 missing persons cases the FBI needs help solving