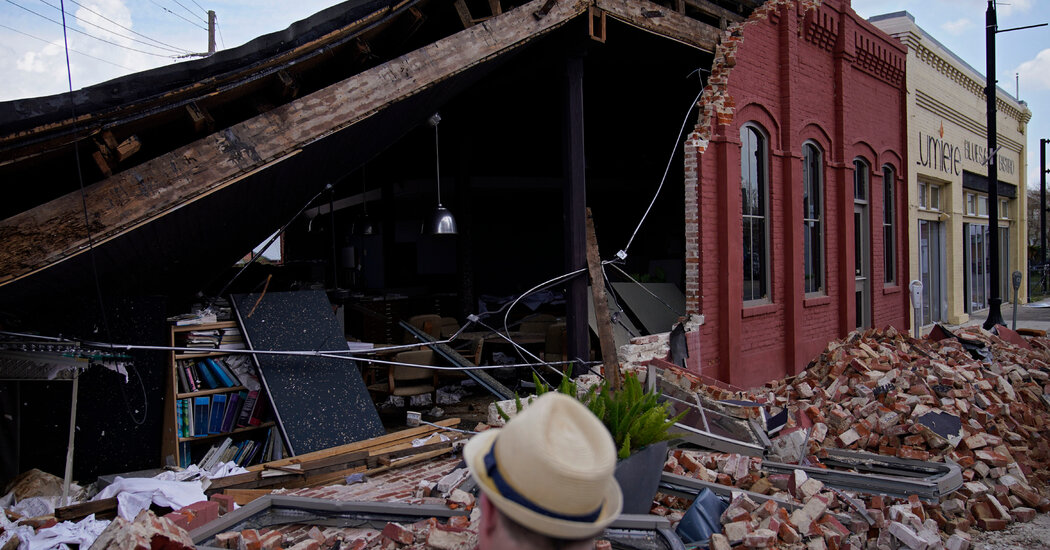 WASHINGTON — The coming weeks on Capitol Hill will be crucial to President Biden’s climate agenda, including whether the president can credibly make the case to the rest of the world that the United States will meet his promise to drastically reduce emissions that are warming the planet.

In Congress, details are emerging of the climate and clean energy policies in a sweeping $3.5 trillion budget package that Democrats are drafting and hope to send to Mr. Biden’s desk by year’s end.

As progressive Democrats and Mr. Biden envision it, the budget bill, which would include a historic expansion of social welfare programs, would also be the single largest piece of climate legislation to pass Congress.

The most powerful climate mechanism in that bill is a $150 billion incentive and penalty program designed to replace most of the nation’s coal- and gas-fired power plants over the next decade with wind, solar and nuclear plants. The program would pay electricity suppliers for increasing the amount of power they produce from clean zero-emissions sources, and fine those that don’t.

Power plants that burn fossil fuels are the second-largest source of greenhouse emissions after cars and trucks, and shutting them down would significantly lower the nation’s heat-trapping pollution. If enacted, the program could stand as the centerpiece of Mr. Biden’s climate agenda.

On Monday, the House energy committee will begin consideration of that provision, known as the Clean Electricity Payment Program.

Many Democrats returning from recess to Washington next week say they are emboldened to push for the clean electricity plan and other aggressive climate action after a summer in which nearly every corner of the country experienced deadly droughts, floods, wildfires and heat waves that scientists say have been worsened by climate change.

Democrats are now making the case that the proposed record spending regarding climate change is an economic imperative.

“Last year alone, our country experienced 22 major natural disasters costing Americans a record-shattering $95 billion in damages — figures that represent more than double the historical average, but which still don’t reflect the cost of lost jobs or the trauma of families losing their homes,” said Representative Frank Pallone, Democrat of New Jersey, chairman of the House Energy and Commerce Committee, which will draft the central climate provisions of the budget bill. “The climate crisis is here, and the cost of inaction is already staggering.”

The House energy committee will debate other climate provisions in the budget bill, including $13.5 billion to construct charging stations for electric vehicles and promote the electrification of heavy-duty vehicles. Another program would spend $9 billion on updating the electric grid, to make it more conducive to transmitting wind and solar power, and to make it more resilient to the extreme temperatures, flooding and fires that scientists say are now unavoidable. Another provision would spend $17.5 billion to reduce the carbon dioxide emissions from federal buildings and vehicles. The budget bill would also assess a fee from oil and gas companies for leaks of methane, a potent greenhouse gas. The government would use the revenue from those fees to pay for climate mitigation programs.

At the same time, Democrats on other committees are drafting tax incentives intended to lure American drivers away from fossil-fueled cars — the nation’s top source of greenhouse pollution — and toward electric vehicles, and to boost companies that design clean energy technology. They are readying money for a “Civilian Climate Corps” — a program designed to put young people to work in environmental conservation and climate resilience. And they are preparing to channel billions to help low-income and minority communities, which are disproportionately affected by the impacts of climate change, as well as communities that would lose fossil fuel jobs as a result of climate change policies.

But the passage of such policies is still far from certain. Republicans have already indicated they will oppose the $3.5 trillion budget plan. That means Democrats will need every vote from their party. Two Democratic senators, Joe Manchin III of West Virginia and Kyrsten Sinema of Arizona, have said they are opposed to the price tag and are looking for programs to cut. Mr. Manchin in particular may be focused on dropping provisions that would harm the coal industry.

In May, the world’s leading energy agency said nations around the world must immediately stop approving new coal-fired power plants and new oil and gas fields and quickly phase out gasoline-powered vehicles if they want to avert the most catastrophic effects of climate change.

Despite a precipitous decline in the United States, the coal industry still looms large in West Virginia. Mr. Manchin has financial connections to the industry; he owns stock valued at between $1 million and $5 million in Enersystems Inc., a coal brokerage. Last year, Mr. Manchin made $491,949 in dividends from his Enersystems stock, according to his Senate financial disclosure report. As chairman of the Senate energy committee, Mr. Manchin has broad authority in shaping the outcome of the budget bill.

A spokeswoman for Mr. Manchin, Sam Runyon, did not respond to an email seeking comment from him.

However, several congressional Democratic staff members who have been working on the power plant language say they have been in close, frequent contact with Mr. Manchin’s staff as they draft the bill. More than one described the senator’s current stance on the language as “not a no.”

Mr. Biden will need something more definitive than that, however, and soon, if he is to convince other countries that the United States — the world’s largest economy and second-largest greenhouse gas polluter — can change its ways on climate, after four years in which former President Donald J. Trump openly mocked the science of climate change.

In November, Mr. Biden is scheduled to travel to a major United Nations climate change conference in Glasgow, Scotland, at which world leaders are expected to make new pledges committing to stronger reductions of planet-warming emissions — and to demonstrate the domestic policies that will allow them to meet those commitments.

Mr. Biden has already done the former: Earlier this year, he made the bold pledge that the United States would cut its carbon dioxide emissions 50 percent from 2005 levels by 2030. And he has also pledged to eliminate fossil fuel emissions entirely from the power sector by 2035.

It will be extremely difficult, if not impossible, to meet those goals without passage of the Clean Electricity Payment Program, experts say.

“This budget bill needs to pass in order for the United States to have credibility in Glasgow,” said Alice Hill, a senior fellow at the Council on Foreign Relations, who also served as a climate adviser to the National Security Council during the Obama administration.

Speaking specifically of the clean electricity program, she said: “That piece is critical. That is essentially going to be one of the most effective ways to have meaningful reductions immediately.”

If the final bill passes without the power plant plan, “that will unfortunately be interpreted as a signal that the United States is not committed,” Ms. Hill said. “It will make it a lot harder for the Biden team to convince the rest of the world that we’re back.”