Home  /  News   /  Biden Tries to Reassert American Leadership, and His Own 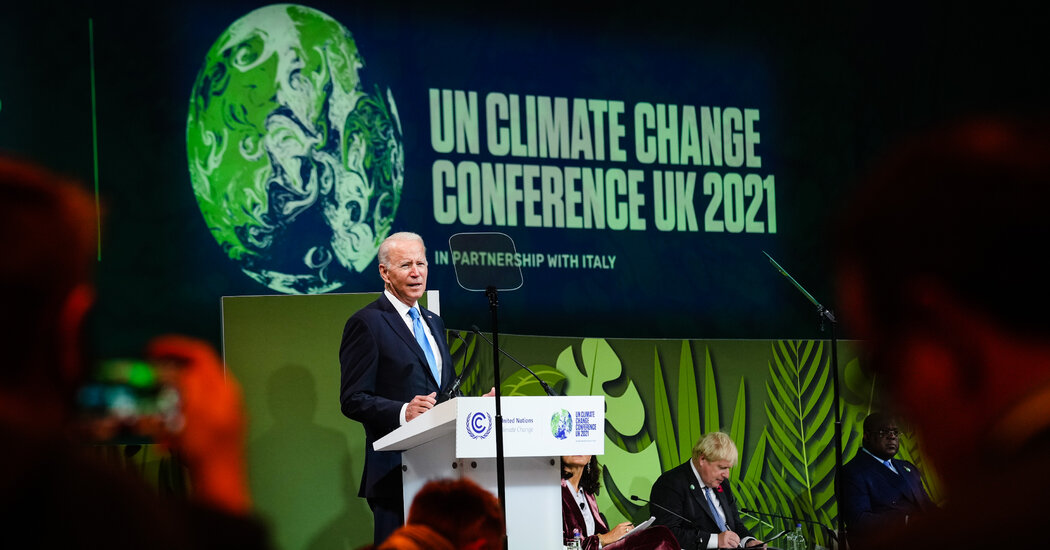 Biden Tries to Reassert American Leadership, and His Own


GLASGOW — President Biden’s major goal for his second foreign trip since taking office was to reassert America’s ability to lead the world on climate change before it is too late. But he also wanted to reassert Joe Biden.

From the moment he landed in Rome on Friday for the Group of 20 meeting, and then traveled to the climate summit in Glasgow, Mr. Biden took on the role of a traveling salesman, exulting in the backslapping, personalized politics that he believes makes him a strong negotiator and can translate into substantive deal making.

“It never ceases to amaze me when you’re looking at someone straight in the eye when you’re trying to get something done,” Mr. Biden said in a news conference in Rome. “They know me. I know them. We can get things done together.”

Mr. Biden did take some wins back to Washington with him on Tuesday night, including a new global minimum tax for companies, as well as climate agreements to reduce methane emissions — a deal he said was “the foundational commitment” of his administration — and deforestation. But if those deals were significant, they were largely finalized before his trip.

Confronted with a lack of consensus among world leaders on how to move forward globally, and with his climate agenda hanging in the balance in Congress at home, Mr. Biden’s time in Glasgow laid bare the reality that the personal style he prefers has not yet helped him close the gulf between his ambition and what he has been able to achieve.

“He enjoys the personal side of personal diplomacy,” said Richard Haass, a former senior State Department and national security official who is now president of the Council on Foreign Relations. “My own view is he exaggerates its impact. All the charm in the world is not going to bring Brazil around on the rain forests, or Australia around on coal, or China or Russia around on much of anything.

“Diplomacy will only get him so far.”

In Glasgow, China and Russia, two of the world’s largest producers of greenhouse gas emissions, sent negotiating teams to the conference, known as COP, but not their leaders. Chinese President Xi Jinping sent only a written statement, promising that his country “will continue to prioritize ecological conservation and pursue a green and low-carbon path to development.”

Dozens of other heads of state delivered introductory statements about keeping shared climate goals alive yet offered competing ideas for how to do it.

“There’s simply no consensus,” Mr. Haass added, “and the United States cannot pound the table and insist on one.”

At a farewell news conference, Mr. Biden, again seeking to assert American leadership, said that he thought it was a “big mistake” for China not to show up at the conference. “They’ve lost their ability to influence people around the world, and people here at COP,” Mr. Biden said.

He suggested he was open to playing a long game when it comes to persuading China to come to the table: He said that he and Mr. Xi had at least a nascent relationship from his time as vice president, and said they’ve spoken “at least five or six hours” by telephone since January.

But he was also fundamentally optimistic about the ability of democracies to work together. Mr. Biden spent much of his time in Glasgow telegraphing that he is doing all he can with the power he has, either through executive action or restoring the sort of environmental regulations that were eviscerated during the Trump era.

“We’re all on the same team with essentially the same issues,” he said to allies, including Boris Johnson, Britain’s prime minister, and Ursula von der Leyen, president of the European Commission, during a meeting on a U.S.-sponsored global infrastructure initiative. “Democracy is still the best way for delivering results.”

But the limits of those results could sometimes be starkly evident: In a meeting about the new global pact to limit methane emissions, organizers displayed a map showing the 90 countries that had signed the accord colored in blue. Yet several of the world’s major emitters, including China, Russia and India, appeared as vast white spaces, since they had not signed on.

Mr. Biden’s strategy was to treat the absence of Mr. Xi and another rival, President Vladimir V. Putin of Russia, as an opportunity to prove that the world’s democracies can deliver. Earlier in the trip, his national security adviser, Jake Sullivan, sought to ratchet up the pressure on China, telling reporters on Air Force One en route to Glasgow that China had “an obligation to step up to greater ambition as we go forward.”

Wang Wenbin, a spokesman for the Chinese ministry, soon fired back, demanding that the United States shoulder more responsibility for reducing greenhouse gas pollution and provide more support to poorer countries hit hardest by the consequences of global warming.

“In particular, the climate policies of the United States, a major historical emitter, have constantly flipped and flopped and gone backward, and its own emissions have reached a peak and begun to decline only in recent years,” Mr. Wang said.

Yet beneath the bluster, the relationship with China remains the most critical going forward. Mr. Biden and Mr. Xi have not met in person since Mr. Biden has been in office, but are expected to hold a virtual meeting later this year that officials have said could help the two men establish ties.

The summit here will continue until Nov. 12 and Mr. Biden is leaving behind a delegation led by John Kerry, who helped secure the Paris climate agreement in 2015 as secretary of state and now serves as the administration’s climate envoy. On Tuesday, Mr. Kerry said he expected new financial commitments to fulfill a long-delayed promise to provide $100 billion a year in aid for developing countries to fight and adapt to global warming, though it was unclear if every country would make good on its pledges.

Throughout the trip, Mr. Biden, who faces dreary approval numbers at home, appeared confident that the same measured approach he took abroad would ultimately result in the passage of two key bills that await him back in Washington: a $1.85 trillion social safety net measure that includes provisions for clean energy, and a $1 trillion infrastructure bill.

Representative Ro Khanna, a California Democrat who has been working with the president to refashion his climate agenda, said in an interview that Mr. Biden told him ahead of his trip to Europe that “American prestige” was on the line.

The president, Mr. Khanna said, told him that “when he meets with foreign leaders, they tout the benefits of autocracy and authoritarianism. He wants to be able to show that democracies can govern and do big things, and do big things with the appropriate speed.”

Mr. Biden is eager to establish himself as a global leader of collective action on climate policy. That’s a drastically different tack than the approach taken by the Trump administration, which rolled back more than 100 environmental protection rules and, some experts argue, accelerated the effects of climate change.

“The first thing to do is to stop the bleeding,” said Leah Stokes, an associate professor at the University of California, Santa Barbara, who works on climate and the environment and has been advising Senate Democrats on how to craft the legislation. “The next thing to do is make progress, get back to the starting line and start going in the right direction.”

The progress Mr. Biden had hoped for has been stalled by Democratic infighting in Congress. The climate-focused measure has been whittled down from its most expansive form, in large part because Senator Joe Manchin III, Democrat of West Virginia and one of the party’s two holdouts on the spending package, said that he would not vote on the package until he knew more about the plan.

But if Mr. Biden can secure passage, the bill — which includes $555 billion to fight climate change, largely through tax incentives for low-emission sources of energy — would be the most ambitious plan adopted by the United States yet.

Mr. Manchin’s reluctance has not seemed to temper Mr. Biden’s optimism about having the votes to pass his agenda in both chambers of Congress, with no Republicans expected to support it.

“I believe that Joe will be there,” Mr. Biden said, referring to Mr. Manchin. “I think we’ll get this done.”