Home  /  News   /  As Afghan Forces Crumble, an Air of Unreality Grips the Capital 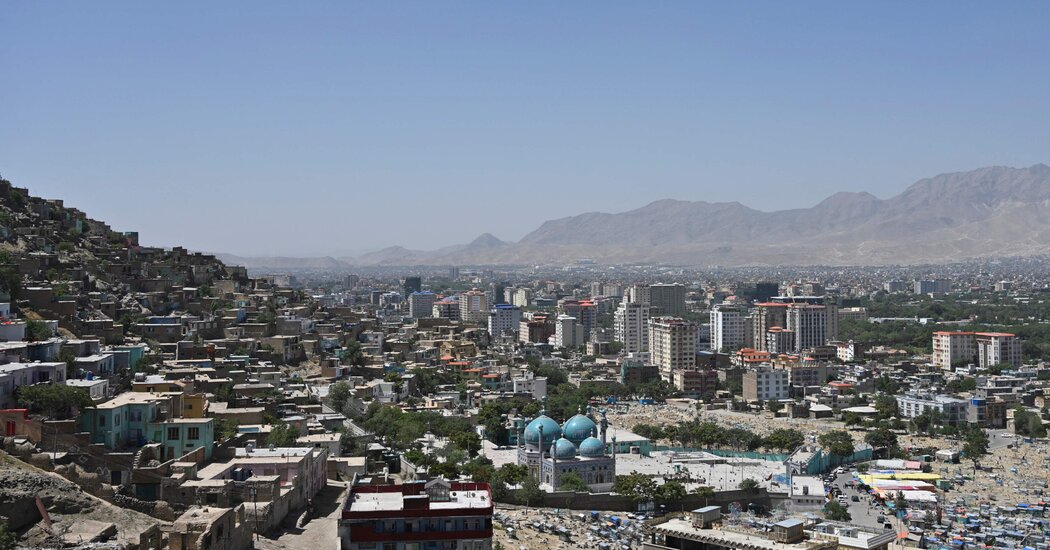 As Afghan Forces Crumble, an Air of Unreality Grips the Capital


KABUL, Afghanistan — With his military crumbling, President Ashraf Ghani of Afghanistan fired a crucial part of his command structure and brought in a new one. He created a nebulous “supreme state council,” announced months ago, that has hardly met. And as districts fall to the Taliban across the country, he has installed a giant picture of himself outside the airport’s domestic terminal.

On Friday, U.S. officials announced the definitive closure of Bagram Air Base, the nerve center of 20 years of American military operations in Afghanistan, in the functional end of the American war here. As the last troops and equipment trickle out of Afghanistan, an atmosphere of unreality has settled over the government and Kabul, the capital.

Americans have not been a visible presence in the city for years, so the U.S. departure has not affected surface normality: Markets bustle and streets are jammed with homeward-bound civil servants by midafternoon. At night, the corner bakeries continue to be illuminated by a single bulb as vendors sell late into the evening.

But beneath the surface there is unease as the Taliban creep steadily toward Kabul.

“There’s no hope for the future,” said Zubair Ahmad, 23, who runs a grocery store on one of the Khair Khana neighborhood’s main boulevards. “Afghans are leaving the country. I don’t know whether I am going to be safe 10 minutes from now.”

The government passport office has been jam-packed in recent days, filled with a jostling mob, even though visa options for Afghans are severely limited. Some of the humanitarian organizations on which the beleaguered citizenry depend said they would begin limiting the number of expatriate employees kept in the country, anticipating a worsening of the security climate.

The security blanket that the United States provided for two decades haunts the Afghan government’s actions, in-actions and policies, fostering an atrophying of any proactive planning, in the view of some analysts. If there is a plan to counter the Taliban advance, it is not evident as the government’s hold on the countryside shrinks.

Intelligence estimates for the government’s collapse and a Taliban takeover have ranged from six months to two years. Whenever it comes, the outlook is likely to be grim for Mr. Ghani and his circle, as recent Afghan history demonstrates. Several of his predecessors in the country’s top job have met violent ends.

“The environment is extremely tense,” said Omar Zakhilwal, a former finance minister, noting what he called an atmosphere of “semi-panic” in the government.

“It’s beyond a crisis,” he said, adding: “The mismanagement has led us to where we are today.”

The roots of the current breakdown within Mr. Ghani’s administration are threefold, officials and security experts say: the delusion of security provided by the Americans, whose determination to leave was never fully believed by civilian or military leadership; the tactical disconnect between conventional Afghan forces and the more nimble guerrilla Taliban; and the reduction of the government to the person of Mr. Ghani himself and a handful of aides, foreign-educated, some with families safely abroad.

The first fatal weakness has been festering for years. With American might always ready to push the Taliban back, the inclination toward an aggressive self-defense posture withered.

“They didn’t have a strategic plan for when the Americans leave,” said Gen. Hilaluddin Hilal, a former deputy defense minister.

Dr. Abdullah Abdullah, the chairman of Afghanistan’s High Council for National Reconciliation, acknowledged as much at a recent meeting: “We were not ready for the decision to withdraw U.S. troops from Afghanistan,” he said.

More than a quarter of the country’s 421 districts have been seized by the insurgents since early May, in a sweeping campaign that has largely targeted Afghanistan’s north and even seen some provincial capitals besieged by Taliban fighters.

In some places, government forces are surrendering without a fight, often because they have run out of ammunition and the government doesn’t send more supplies or reinforcements.

The tactical mismanagement of the Afghan military and police forces is a rerun on a smaller scale of losing battles fought against insurgent groups for 40 years.

“You have a highly centralized military fighting a war against a highly decentralized insurgency, fighting an irregular war,” said Tamim Asey, a former deputy minister of defense who now leads a think tank in Kabul. “That is a recipe for disaster.”

It is a lesson painfully inflicted, but barely learned, in over two centuries of warfare in Afghanistan. “We see history repeating itself in this country: A proxy insurgency is coming from rural areas to take power,” Mr. Asey said.

“It’s not about one person. It’s about the leadership,” said Hadi Khalid, a retired lieutenant general. “Our security leadership didn’t think it was its job to prepare a self-defense.”

Mr. Ghani’s newly appointed acting defense minister, Gen. Bismillah Khan Mohammadi, a grizzled veteran of previous wars, declined an interview request, saying through a spokesman that he did not want to speak to the news media until he had a record of accomplishment. Junior army officers expressed guarded confidence while noting that they had no choice but to fight.

Recent days have seen government forces regain control of key districts in the northern city of Kunduz. But since the new cabinet appointments, more than a dozen additional districts have fallen.

Humvees, weapons and piles of ammunition have fallen into Taliban hands, much of it paraded triumphantly on videos released on social media by the group’s propagandists. The insurgents have even made easy inroads in northern provinces far from their homelands in southern Afghanistan, areas they struggled to capture in their mid-1990s takeover.

Yet the government seems detached from the onslaught on its soldiers and citizens. In the wealthier neighborhoods of Kabul, a frequent high-stakes poker game, with as much as $120,000 on the table, includes government officials, several people who have observed the game told The New York Times. At least one observer said he had seen people in positions of responsibility at the game, which he deplored as misguided at a time of national crisis.

Not a single official showed up last month to a memorial for the nearly 70 schoolgirls who were killed a suicide bombing attack in Kabul in May. Grieving mothers wept quietly into their black robes; the government sent a bare handful of police officers to protect the mourners, vulnerable members of the Hazara ethnic minority, like the victims.

Accordingly, citizen militias are on the rise again in Afghanistan, with various ethnic and regional factions stirring up a volunteer effort to defend themselves against the Taliban’s advance.

On one level, the militia movement could inspire some hope that a large-scale collapse will not be immediate. But for many Afghans, the mustering is so evocative of the country’s devastating civil-war era that many fear it is a harbinger of greater chaos to come, with the war of insurgency fracturing into a multi-sided conflict with no central command against the Taliban.

Officials inside the government, along with those who have left it, describe an atmosphere of improvisation, a bureaucracy caught off guard despite weeks of warning signs — even before the latest advance, the Taliban were slowly picking off districts — and the absence of a coherent plan.

Midlevel officials in the presidential palace expressed concern that they hadn’t been made aware of any plan to counter the Taliban amid their assault. Some officials insisted that there was a plan in place, though they couldn’t articulate what it was. A Western diplomat who was not authorized to speak publicly said he had detected signs that a sort of strategy was finally being implemented: abandoning nonstrategic rural districts to better consolidate remaining troops in places of value to the government.

Public pronouncements are largely limited to ringing denunciations of the Taliban and vows to defeat them, with no hint as to how the government intends to do so. As a result, Afghanistan’s citizens are in the dark, worried, and rapidly losing whatever confidence they may once have had in Mr. Ghani.

“There is no response. They don’t have a counteroffensive strategy,” said Mr. Asey, the former deputy defense minister. “Nobody knows what it is.”

If there is a military strategy, it is not apparent to the soldiers on the ground.

After the capture in mid-June of an army base at Andar, in Ghazni Province south of Kabul, a provincial council member noted that the besieged fighters had begged for help. “No one heard their voice,” said the council member, Amanullah Kamrani. The soldiers were all but abandoned to the Taliban. Five were killed and the rest surrendered.

Inside the presidential palace, Mr. Ghani has continued to isolate himself.

Current and former aides to the president say he rises at 5:30 a.m. to read a stream of reports, consulting with a handful of close aides and working until late into the evening. He has long had a problem with insomnia, they say, chopping up his days and nights into bursts of work interrupted by naps. But mostly, in a public sense, he has been absent except for the occasional pronouncement about the economy or corruption.

Several former aides criticized the president’s reliance on a tiny circle of Western-educated advisers. They noted that cabinet members were afraid to contradict him because of his tendency to yell at them.

“He is the republic,” said Mr. Zakhilwal, the former finance minister. “The government is two, three, four faces.”

“A soldier sitting there, watching, asks, ‘Should I sacrifice my life?’” he added. “That’s why we are seeing soldiers surrendering across Afghanistan.”