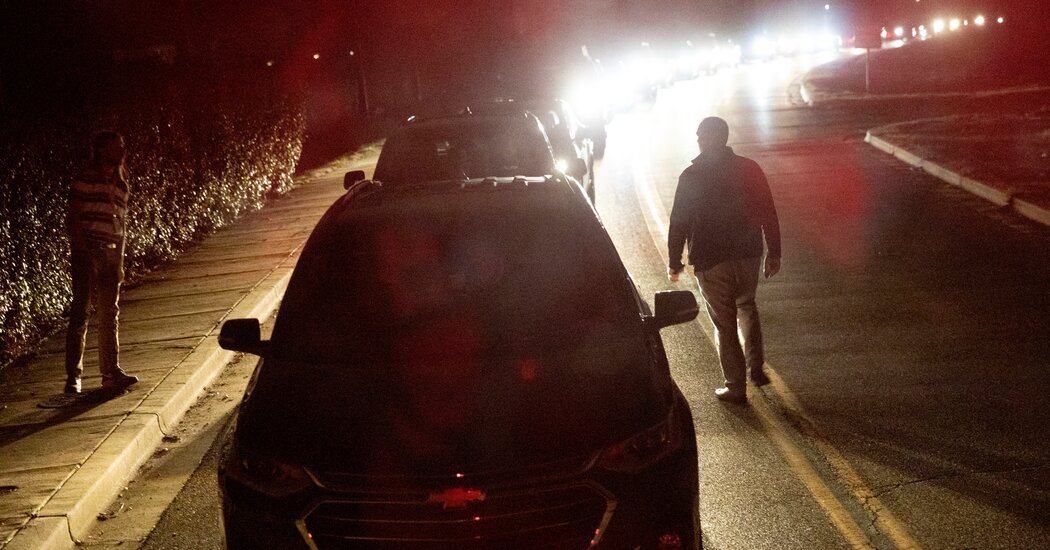 
The military base in Maryland that the president and the vice president use to travel to and from Washington was put on lockdown on Sunday night when two people, at least one of whom was armed, bypassed a security checkpoint at about the time that Vice President Kamala Harris and four Cabinet members landed there, military officials said.

The two people drove through the checkpoint at the main gate and “failed to adhere to commands of security personnel,” Joint Base Andrews in Prince George’s County, Md., said in a statement on Sunday night.

The authorities at the base, in the Maryland suburbs of Washington, stopped the intruders’ vehicle with “barriers,” but they fled, the statement said. One of them was apprehended, but the other was still being sought late Sunday night.

Ms. Harris and her husband, Doug Emhoff, were safely flown off the base on Marine Two, the vice-presidential helicopter, although it was unclear if they left before or after they heard about the lockdown, according to reporters who had just traveled to Selma, Ala., with Ms. Harris.

Police officers searched the grounds and the vehicles at the scene, including a shuttle containing the reporters.

Traffic leaving the base was halted while police enforced the lockdown, creating a long line stretching back from a main gate. Police vehicles and helicopters circled the base.

Ms. Harris, Mr. Emhoff and the four Cabinet members — Education Secretary Miguel Cardona; Transportation Secretary Pete Buttigieg; Housing Secretary Marcia Fudge; and Michael S. Regan, the administrator of the Environmental Protection Agency — had just flown into the base on Air Force Two, according to the reporters who had traveled with them.

The vice president had traveled in the morning to commemorate the 57th anniversary of the civil rights march on the Edmund Pettus Bridge in Selma.

In February 2021, an intruder at the base boarded a plane typically used by senior government officials and military leaders. The breach prompted the authorities to order a review of security at Air Force bases worldwide.

A similar lockdown at the base happened in 2016 after there were reports of an active gunman, grounding then-Vice President Joseph R. Biden Jr.’s flight to Ohio. It came the same day the base had planned to hold an active shooter response drill. The reports of a gunman turned out to be false.