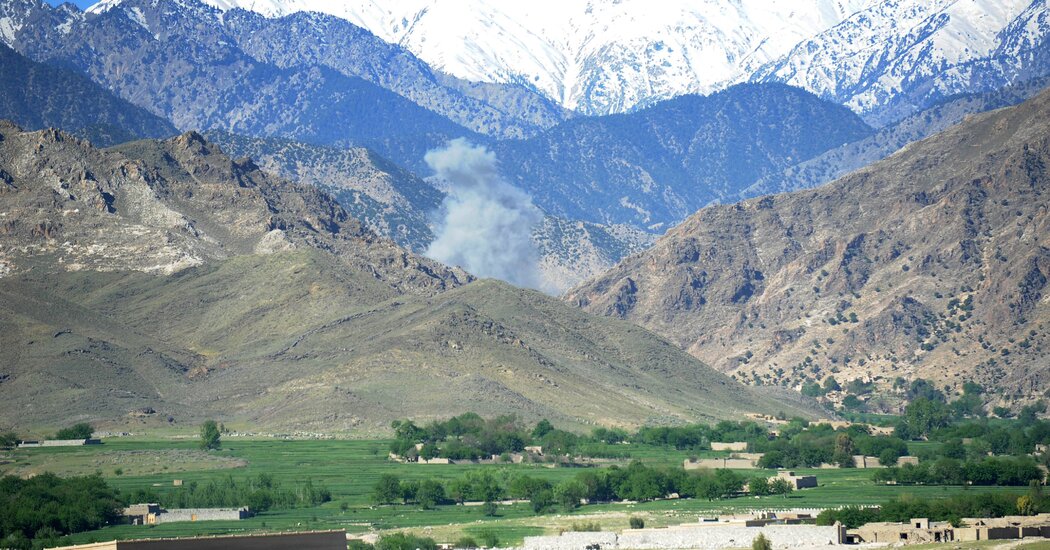 
The U.S. military has announced its first reprisal strike in Afghanistan since an attack on the Kabul airport killed 13 U.S. service members and as many as 170 other people, as U.S. officials again warned Americans to leave the airport because of security threats.

“U.S. military forces conducted an over-the-horizon counterterrorism operation today against an ISIS-K planner,” Capt. Bill Urban, spokesman for the U.S. Central Command, said in a statement on Friday. He was referring to the Islamic State affiliate in Afghanistan, also known as Islamic State Khorasan, which has claimed responsibility for the Thursday attack.

“The unmanned airstrike occurred in the Nangarhar Province of Afghanistan,” Captain Urban said. “Initial indications are that we killed the target. We know of no civilian casualties.”

The attack at the airport was one of the deadliest in the nearly two decades since the U.S.-led invasion. American officials believe that “another terror attack in Kabul is likely,” the White House press secretary, Jen Psaki, said on Friday. “The threat is ongoing, and it is active. Our troops are still in danger.”

The U.S. airstrike followed President Biden’s searing remarks from the White House on Thursday, when he pledged to “hunt down” the terrorists who claimed credit for the bombing.

“To those who carried out this attack, as well as anyone who wishes America harm, know this: We will not forgive,” Mr. Biden said, using language that had grim echoes of warnings President George W. Bush made after the terrorist attacks of Sept. 11, 2001.

A warning from the American Embassy in Kabul said that U.S. citizens at the airport “who are at the Abbey gate, East gate, North gate or the New Ministry of Interior gate now should leave immediately.”

Two key U.S. allies, Britain and France, said on Friday that they were winding down or had ended their evacuations at the airport, which crowds continue to try to reach as they seek to flee the Taliban. French officials blamed the “rapid disengagement of the American forces” for the lack of security.

Civilian evacuations on chartered planes had halted since the attack. Private security companies and aid groups have told Afghans to remain in safe houses and avoid the airport as they plan to shift to evacuations by chartered buses through land crossings over the border with Pakistan, according to several people involved in the efforts.

At the airport and in the streets, the U.S. military and the Taliban tried to exert what authority they could. Fighters with Kalashnikov rifles kept crowds farther away from the airport’s entrance gates, guarding checkpoints with trucks and at least one Humvee parked in the roads.

The U.S. military resumed evacuation flights, and White House officials said early Friday that 12,500 people had been evacuated from Afghanistan in the previous 24 hours, despite the attacks.

The waiting crowds, many standing by buses with bags at their sides, numbered in the hundreds, not the thousands of previous days. Hundreds of thousands desperate to escape Taliban rule are estimated to remain in the country, but very few appeared to be getting to the airport gates.

The airport itself appeared to be largely, if not entirely, locked down. At the airport’s southern and eastern gates, Taliban guards told a reporter that no one was allowed to go near the airport and that all entrance gates were closed. About 5,400 people remained inside waiting evacuation, the Pentagon said on Friday.

The grisly scenes on Thursday, when children were among those killed in the crowds, illustrated the intense danger for those braving the high-risk journey to the airport.

On Friday, the U.S. military revised its account of what had happened at the airport a day earlier, with Maj. Gen. William Taylor of the Joint Staff saying, “We do not believe that there was a second explosion at or near the Baron Hotel, that it was one suicide bomber.” Many witnesses had reported hearing two blasts.

The death toll rose sharply Friday as health officials revised upward the number of bombing victims. The figure of 170 dead and at least 200 wounded, which did not include the 13 U.S. service members killed and 15 wounded, was supported by interviews with hospital officials. They said some of the dead civilians were Afghan Americans who had U.S. citizenship.

America’s tumultuous exit from Afghanistan has dragged down Mr. Biden’s approval ratings, and the bombing on Thursday will surely open him up to political criticism. But it is unclear what the damage will be to his presidency in the long term, as he exits a war that most Americans want out of as well.

A controlled detonation by American forces that was heard throughout Kabul has destroyed Eagle Base, the final C.I.A. outpost outside the Kabul airport, U.S. officials said on Friday.

Blowing up the base was intended to ensure that any equipment or information left behind would not fall into the hands of the Taliban.

Eagle Base, first started early in the war at a former brick factory, had been used throughout the conflict. It grew from a small outpost to a sprawling center that was used to train the counterterrorism forces of Afghanistan’s intelligence agencies.

Those forces were some of the only ones to keep fighting as the government collapsed, according to current and former officials.

“They were an exceptional unit,” said Mick Mulroy, a former C.I.A. officer who served in Afghanistan. “They were one of the primary means the Afghan government has used to keep the Taliban at bay over the last 20 years. They were the last ones fighting, and they took heavy casualties.”

Local Afghans knew little about the base. The compound was extremely secure and designed to be all but impossible to penetrate. Walls reaching 10 feet high surrounded the site, and a thick metal gate slid open and shut quickly to allow cars inside.

Once inside, cars still had to clear three outer security checkpoints where the vehicles would be searched and documents would be screened before being allowed inside the base.

In the early years of the war, a junior C.I.A. officer was put in charge of the Salt Pit, a detention site near Eagle Base. There the officer ordered a prisoner, Gul Rahman, stripped of his clothing and shackled to a wall. He died of hypothermia. A C.I.A. board recommended disciplinary action but was overruled.

A former C.I.A. contractor said that leveling the base would have been no easy task. In addition to burning documents and crushing hard drives, sensitive equipment needed to be destroyed so it did not fall into the hands of the Taliban. Eagle Base, the former contractor said, was not like an embassy where documents could be quickly burned.

The base’s destruction had been planned and was not related to the huge explosion at the airport that killed an estimated 170 Afghans and 13 American service members. But the detonation, hours after the airport attack, alarmed many people in Kabul, who feared that it was another terrorist bombing.

The official American mission in Afghanistan to evacuate U.S. citizens and Afghan allies is set to end next Tuesday. The Taliban have said that the evacuation effort must not be prolonged, and Biden administration officials say that continuing past that date would significantly increase the risks to both Afghans and U.S. troops.